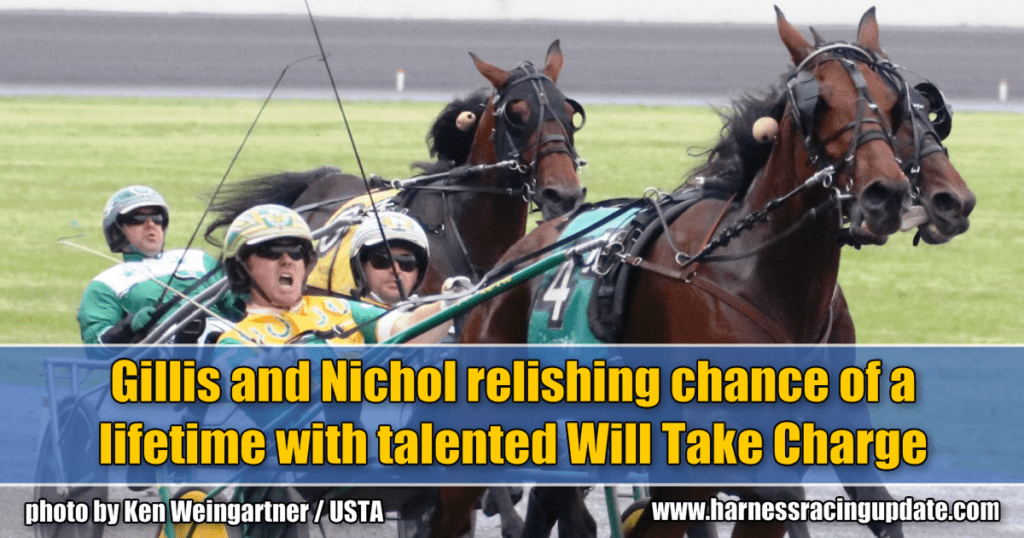 Trainer Jeff Gillis and owner Mac Nichol can only hope they were right in what they wished for. They wanted so badly for Will Take Charge to secure a place in the $1 million International Trot at Yonkers Raceway as Canada’s representative that they bypassed more lucrative opportunities to race him in a $44,000 open handicap there on Sept. 15.

The 5-year-old Kadabra—Celebrity Angel gelding did his part from post seven, the farthest outside position due to a scratch. He took command early and held off an onrushing Gruden by a nose in 1:53.2. That matched the record for an older gelded trotter set by Quick Deal in 2013. He fell one-fifth of a second shy of equaling the fastest mile ever trotted at Yonkers.

Still, when invitations were announced, Gillis and Nichol found themselves on the outside looking in. Since track officials wanted as many nations represented as possible, Canada’s lone entry would be the more accomplished Marion Marauder, last year’s runner-up.

Steve Starr, the racing secretary at Yonkers, asked them to consider the $250,000 Harry Harvey Invitational Trot. He also assured them they would be given every consideration if a horse dropped out.

Gillis and Nichol were working a sale at Lexington when Starr called with the news they had only dared to hope for. Dreammoko, who was to be the flag bearer for the Netherlands, was said to be ill and would not be journeying to New York.

“We were both shocked and surprised,” Nichol said. “It was a good surprise because we didn’t think we were going to be in that particular race.”

Nichol, 64, from Burlington, ON, has been involved with harness racing for more than two and a half decades, enjoying success primarily with pacers. He said of competing in the prestigious International, “It’s once in a lifetime for most of us.”

He will again benefit from the services of Tim Tetrick, his regular driver. They will leave from post 7 and are listed at 6-1 in the morning line. Rail-sitting Marion Marauder is the 3-1 favorite.

It will be a question of which Will Take Charge shows up on Saturday.

“If he’s not on top of his game, he’s not going to beat that field,” Gillis said. “But when he is at his best, I feel he can compete with anybody. There are a few trips he’s gone where he has been very, very good and I would have liked to face anybody that day.”

Will Take Charge distinguished himself in the Aug. 4 John Cashman Memorial at the Meadowlands. He missed by a neck to Marion Marauder. The filly Hannelore Hanover, defending Horse of the Year, came in third.

Recent results, though, have not been as encouraging. He made a break and finished a distant eighth to fellow International competitor Ariana G, a superb mare, in the Dayton Trotting Derby on Sept. 28. He went to the front – his preferred style – but was no match for Homicide Hunter in the Allerage Farms Open Trot at Red Mile in Lexington last Saturday. Homicide Hunter recorded the fastest trotting mile in history, lighting up the teletimer in 1:48.4.

Gillis acknowledged the need for improvement but said, “I believe in the horse. He’s gone some big trips.”

He noted the depth of talent in the 40th edition of the race and said, “I don’t think any horse is going to beat that field without some racing luck and without being on top of their game.”

One encouraging aspect for the connections is that Will Take Charge clearly demonstrated an affinity for the half-mile configuration at Yonkers. The ability to handle the turns – the treacherous first turn, in particular – looms as a huge question for some participants.

“He’s very competitive and he does love the Yonkers track,” said Nichol. “He seems to get around those turns real good. It’s going to be an exciting day, that’s for sure.”

A day he waited a lifetime for.