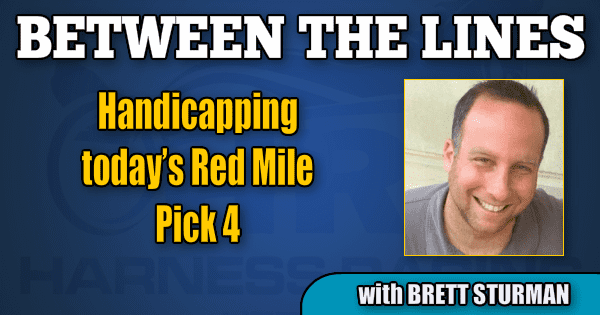 PRESCIENT BEAUTY comes off a lifetime mark from her 1:51.1 taken here in her division of the Bluegrass last week. Going for team McNair, she was impressive in wearing down a formidable horse on the front with a :26.2 final quarter as the 3-5 favorite. An obvious must-include from the rail. TREACHEROUS REIGN dead heated with #1 two weeks ago for second in the She’s A Great Lady final and put up a number of consecutive fast miles in PA during the summer. This track may suit her style as she picks up Zeron. ST SOMEWHERE was game in defeat last out as she was well clear of everyone else for second. Now goes first time Lasix for Burke which should be a nice angle. MAY BRIDE HANOVER found these waters a bit too deep last week but her trip wasn’t the easiest; can land a spot on the ticket from the inside post.

SPEED TITAN set it up last week first over for the eventual winner to ride her cover and extend the unbeaten streak, but for this one it was a step in the right direction. She was one that I liked Peaceful Way where she made a break when leaving, and overall she’s been solid when able to trot a flat mile; barn continues to go well. WHISPERING OAKS pulled the upset two back in the KYSS Final but I thought was more just so-so last week in the Bluegrass and at much shorter odds. Capable of course for top connections but offers no value. CONWAY KELLYANNE closed from far back last week at astronomical odds and gets rewarded by landing the rail; six figure NYSS earner can go with these for Charlie Norris. RUN LINDY RUN was decent in 1:56 in the lone race where she didn’t run; wouldn’t be a total shock if she minds her manners. JEZZYS LEGACY was first over last week and now Schnittker hands the lines to Tetrick; will get attention on that fact alone.

Jim Doherty and Peaceful Way champion THE ICE DUTCHESS has been unbeatable while minding her manners for the team of Takter and Gingras and most recently continued her dominance with a romp here last week in the Bluegrass. She’s bound to be controlling it on the front while starting from the rail; short price coming. CLOUD NINE FASHION won here last week to run the start of her career to a perfect 6 for 6 but now gets her toughest test to date. Here :27.3 closing kick off cover was impressive last out and will have a shot late if she can be within range of #1. TAYLOR SWIFTLY shouldn’t be discounted or overlooked despite the post or recent scratch. Prior to when she came up short in her KYSS final as the 2/5 favorite she had been strong; lone Trixton filly in this race has the early speed to get involved. MA WAS RIGHT hasn’t had the best of racing luck in her last couple of tries; was excellent two back in that KYSS final despite taking the overland route.

HIGH INTO THE SKY was hard used last out to make the front and was game to just miss by a half-length. He had been racing admirably prior to that at long odds against some tough foes and now goes from driver Matt Krueger to Tetrick; may go off as favorite when all is told. MEMO dropped from KYSS competition last week to race against N/W 2 and win in 1:56.3. That number is quicker than most of these can go and looks to be one of the more obvious shorter priced contenders. HATIKVAH could be a sneaky play if he trots. The only recent race he stayed flat in was won by Cantab Fashion who nearly set a world record here yesterday. LUCKY WEEKEND hasn’t been bad against seemingly lesser at Philly and Yonkers; will go faster now but I think would still be a surprise if he won.