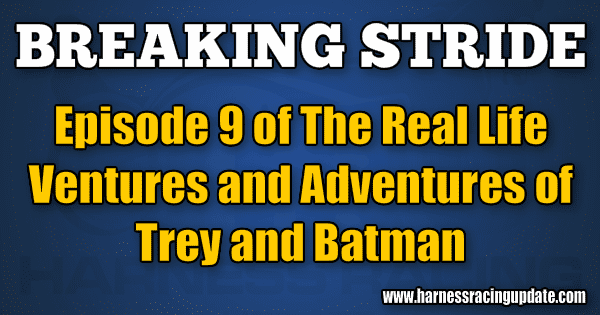 At three in the afternoon, beneath cotton candy clouds, I steered my Prius into the empty gravel parking lot of a winery in central Ohio. The Grape Escape was a large, pristine log cabin between the gravel and acres of grape vines. Above the door was a small white sign, “A Vine Welcome to You.”

My new racing partner and I entered to the smell of freshly cut wood. A middle-aged Sally Fields look-alike waved a greeting from behind the tasting bar. Barely taking a breath, she told us her name was Emily, her sister owned the Grape, she was going to manage it, and we were the third official customers.

Emily poured each of us a glass of house wine with a slight tremble in her hand and no wedding band on her finger. She gave us a Maitre’D gesture toward a screened rear porch that overlooked the rows of vines.

We took our glasses and sat side-by-side at a picnic table looking out at the landscape.

Making sure Emily could not hear, I whispered, “A winery is a worse investment than harness racing. Seriously, I can pick up a box of wine the size of a beer cooler for the price of this glass.”

He smiled and said, “The owners are following a dream, nobody says it has to make sense, or make money.”

“They are heading for heartbreak.”

“Says the man who has purchased a dozen yearlings.”

We were quiet for a minute, and then he broke the silence, “Towards the end of my career in the tech world, companies like mine did a lot of poaching, especially of product designers. One of the people I snagged was Dixon Malbec.”
“Isn’t Malbec a French wine?”

“Actually it’s a classification of wine, and most Malbec comes from Argentina. Anyway, Dixon was, well, Dixon is, a real character, bald on top, long stringy hair on the sides and always wears flannel shirts that belong in logging camps, not Silicon Valley. Dixon is quirky, he doesn’t follow the rules. In many ways, he reminds me of you.”

I pointed to my head, “Full crop of follicles, one of my few assets.”

“Dixon’s interview was a monologue. He even talked like you, always the wise guy. I remember he said, “Here’s the thing you clowns need to know, I don’t overthink things, I just get a weird idea and do it. If it works out, it works out, but if it don’t work out, who gives a shit cause it’s the trying that puts the wind in my sails. So, if you still wanna give me a raise and some of the company stock, you know what you’re getting into. One more thing, I want a couple of women on my team, but don’t make them smoking hot or I won’t be able to think or build.”

I gave a slight tip of my glass in salute, “To Dixon, my kind of guy. Sounds like a kindred spirit or a… doppelganger.”
“Doppelganger?”

“It’s my word of the week. I get one every Monday from an app on my phone. Try to work it into conversations.”

He gave a thumbs up and said, “I’m going miss working with Dixon.”

“At least you met his doppelganger. So, does your trip down memory lane have anything to do with this secret harness racing plan you keep hinting at?”

He swirled the wine in his glass and said, “Peculiar concept, retro product, digital portal, altruistic.”

I pretended to shoot myself in the head, leaned forward and said, “Very cryptic, total bullshit. How did you geeks take over the world?”

He set down his glass and slowed his words, “We have a new horse. My plan is to reach a thousand people who do not know that your little sport exists. We will entertain them, educate them, and maybe even help them. They will have absolutely no risk.”

I gave another salute with my glass, “I gotta love your confidence to believe you can go where no man has ever gone before. I gotta hate the fact that you’re crazy.”

He ignored me and plowed ahead, “Describe the experience of a first-time investor should they buy into a harness horse yearling.”

Using my fingers I gave a list, “Sign the check, have the horse trained, pay stakes, pay bills and see if it is good enough to race eight months later. Some horses turn out good enough to race, some do not. A few make money, most do not.”

He gave a small shake of his fuzzy head, “With a scenario like that, it’s amazing your sport finds a single new person.”

“Or even hangs on to those of us afflicted with the racing virus.”

“Trey, you continue to play the game, you buy yearlings, and you bet the races. Why?”

I waited for a few beats before explaining the inexplicable, “It’s hard to put into words, but the game is just challenging. It gets under your skin, it wormholes into your mind.”

He nodded, “That tells me that if there is a psychological pull, if you find enjoyment, others could catch the racing bug if they are fully and correctly exposed. There is an attraction there that CAN be tapped into.”

“Come on Batman, this is nonsense. Bring it down to earth, where are you going? What can you do that hasn’t been tried six ways from Sunday for over a century?”

He said, “Technology, it giveth and it taketh. My theory is that technology allows immersion into a passion project. This potential digital immersion is new, a huge concept.”

“Alright, I give you that. We all know that with the new technology we could get to more people, but we don’t. So who are you, the Pied Piper of Pacers?”

He slowly shook his head, “Not really, but here is my Dixon Malbec moment, my Dixon idea. My belief is that if we introduce your sport without the pressure of money, introduce horseracing slowly and compellingly, a percentage of people will catch the harness racing virus.”

“That sounds more like a theory than a plan.”

“Right now, I’m designing my product, tinkering, and researching. I’m in the Alpha stage. In a couple of months, we go into Beta testing.”
“We?”

He tapped the tabletop three times with his index finger, “Oh yeah, you’re in deep. You don’t know it, but you are in for the ride. You selected the horse. You will be my guide. You are riding shotgun, my friend.”

“Sure, this may be an expensive fiasco. Where I worked, all the time we sat back and said stuff like ‘Well, that was not quite what we were planning.’ But, it’s the TRYING that is the challenge. You will feel Dixon’s wind in your sails as we try to make this work. You will get enthused, more excited than with any other yearling you have owned.”

“Trey, we can always open a winery.”