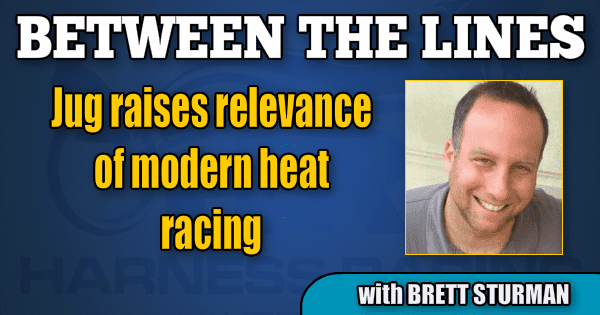 In last week’s eventful second elimination of the Little Brown Jug, first-past-the-post winner Stay Hungry was disqualified and placed fourth. Subsequently, it was announced that Stay Hungry would scratch. It raises the question in the process, are horses today equipped for heat racing and if not, is it something that should be done away with entirely?

Heat racing doesn’t occur often anymore. In addition to the Little Brown Jug, the Hambletonian and Kentucky Futurity come to mind as other prominent stakes contested in heats. Realizing the concern over racing multiple times in one day, almost all stakes that used to have a third heat “race-off” have done away with that in favor of the second heat winner being the overall winner (even if the horse that wins the second heat didn’t win the first). But still, even a second heat can be a cause for concern as we’ve seen.

With his prized 3-year-old, trainer Tony Alagna made his opinion on racing Stay Hungry in the second heat well known. When asked by a USTA interviewer immediately following the announcement of disqualification how he felt about Stay Hungry’s chances in the second heat from post 7 or 8, Alagna said, “No it’s not going to be tough at all because I’m not racing him back. They want to set him back, I understand, but I’m not racing a horse back out of the 8-hole.”

There’s certainly something to be said for not wanting to race a horse a second time on the same afternoon, especially knowing the race will probably be wasted on the insurmountable task of overcoming an outside post on a half-mile track. I would probably feel the same way if I was the owner of a horse in that same situation. After all, Stay Hungry wasn’t winning the Jug from post 8 in a mile that went in 1:49:4. But if a horse can arbitrarily scratch because of an outside post in a second heat, it undercuts the integrity of the heat racing format. Related to the matter of scratching because of bad post position draws, there are penalties for horses that scratch out of post 8 on certain half-mile tracks in standard overnight races to deal with this very issue.

You can’t say the scratching of Stay Hungry was all about protecting the horse, because it’s almost certain that he would have raced in the second heat had he been eligible to draw into posts 1 or 2. Rather, it (understandably) wasn’t worth it to sacrifice the horse for a second heat when it could have longer term repercussions for the remaining part of his seasonal campaign.

Stay Hungry is far from the first horse to scratch from a second heat and won’t be the last. While it’s prerogative of the connections of any horse to scratch for any reason, there should be an understanding going into races such as the Jug that barring immediate health, horses should be prepared to go as many heats as necessary. It’s part of what makes the Jug, the Jug. You can’t just scratch because you don’t like the post or the circumstances. Especially when there is a potential Triple Crown on the line no less. What if in harness racing everyone scratched all the time who drew outside posts in similar situations?

Back to heat racing in general, it’s obvious that racing multiple times in a day is not something horses are accustomed to and it’s hard to know the impact on a horse that it can have. One has to only look to this year’s Hambletonian champion, Atlanta. Thought she was successful on Hambletonian day after two grueling races, it’s possible that she hasn’t been the same since due to what that day may have taken out of her. Though still racing admirably, she hasn’t resembled the absolute monster that she was throughout the spring and summer.

From what we’ve seen, heat racing is a tricky business. Trainers have spoken in the past about their displeasure for it, which can be understandable if such races are to be avoided. But for as long as heat racing still exists, connections should be prepared to see the races through if they choose to enter.
Jug aftermath

Courtly Choice rode the wave of his Little Brown Jug win and now sits easily as the highest-rated 3-year-old pacer in this week’s Top 10 poll. Coming in at #2 only behind the filly trotter Manchego, Courtly Choice is now in driver’s seat to claim divisional honors heading into the fall season. With a Jug win and Meadowlands Pace wins to his credit among multiple other stakes, it will take a lot to catch him.

Even with the scratch from the Jug’s second heat, it shouldn’t take anything away from the fact that Stay Hungry did win his elimination (albeit Courtly Choice raced just as well after making an early break in that race). He was on a roll coming in to the Jug and if he stays sharp will have multiple chances to overtake his rival between now and the Breeders Crown, beginning with a showdown this Sunday against fellow stablemate American History. Still in the mix is North America Cup winner Lather Up, who with a late season burst including a Breeders Crown win could stake his claim also.

For many of these top 3-year-old pacers the next stop is the Grand Circuit at the Red Mile. Fortunately, heat racing will be behind them.