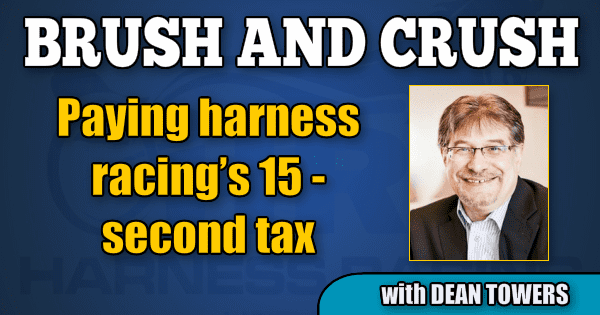 This past weekend, two young NFL kickers, Daniel Carlson and Zane Gonzalez of the Vikings and Browns, respectively, felt the wrath of the fans and sports media after missing an array of game saving or winning kicks. The chatter was so intense you’d think TMZ released video of them knocking off a set of liquor stores.

This is something we see often in sports and society – human beings doing their best, failing, and fans reducing them to a caricature. If we’re honest with ourselves, I think most of us partake in it from time to time. It’s human nature.

Tennis player Andre Agassi has written and spoken about this phenomenon. He believes the price of stardom (and his ability to cash nice sized paychecks) involves a “tax”, whereby each fan is owed at least 15 seconds of his time. These fans can be cordial, and he happily gives them time or an autograph to say thank you; they can be nasty, and he has to read it written, shouted from the stands, or in the very worst cases hear it in person on the street, or in bars or restaurants.

One might think harness racing participants – trainers, drivers – do not have to pay this tax because it’s such a small sport. But I’m not sure that’s the case.

Harness racing draws about $2 billion in wagering a year from the general public. In comparison, the NFL receives about $8 billion in revenues, and in hockey, NHL players make about $2 billion. We all realize that those two mainstream sports dwarf harness racing in popularity, but the simple fact is, big money is flowing through the turnstiles, as well as the betting windows.

So, when equipment changes were made on Swandre the Giant last week for the Canadian Trotting Classic, and world-class trainer Jimmy Takter is called something not too nice in the grandstand after the colt fails, it’s just the way it is.

It matters not that Jimmy and his capable team had the horse looking much better on the turns than the previous week, and he’s a top trainer who knows what he’s doing. It only matters that that fan lost the $50 he or she wagered, and they’re expressing themselves in the only way they can. Jimmy (already no doubt in a sour mood because his colt was sitting perfectly and busted) still has to pay the tax.

On the good side, paying the tax to fans who express themselves in positive ways is something that I don’t think should be lost either. Woodbine Entertainment driver Jody Jamieson seems to get this concept in spades.

After a win, time after time, Jody walks his horse along the rail where fans (most of them young) can get close to the horse, or give him a high five for the win. It’s done on purpose — it’s the “15 seconds” he believes he owes — and this simple gesture can make someone’s day.

On social media, the “15 seconds” can seem cumbersome, because, well, it’s nameless, faceless (often times horrible) social media. But it’s easy to ignore the bad stuff and spend 15 seconds on the good. The ever-personable Corey Callahan exemplified that just this weekend after one of his big Kentucky Sires Stakes wins: 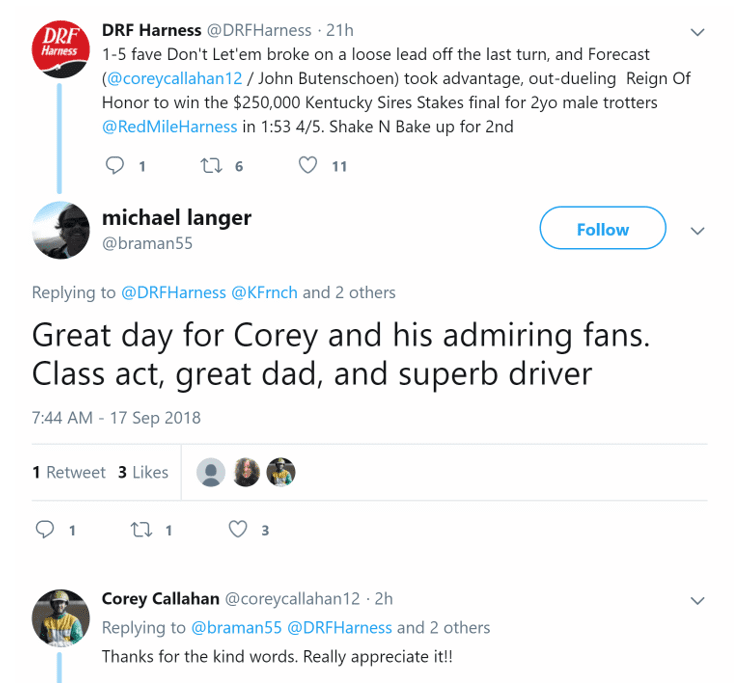 It took Corey just a second to acknowledge a nice comment. And it’s the right thing to do.

Although most of us consider harness racing a small sport, dominated by insiders, there’s a whole world out there watching it. And we should be happy they are. When there’s no one to give 15 seconds to, harness racing’s days as a sport are over.