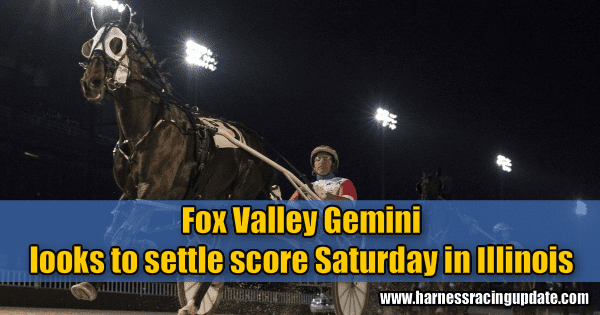 The 3-year-old pacer’s only two losses in a stellar 19-race career have come in his home state to You’remyhearthrob. Saturday, during Hawthorne Race Course’s Night of Champions, the two pacers will square off again on a gangbuster’s card featuring purses exceeding $1.1 million.

Before Fox Valley Gemini hits the road for Indiana, where he will embark on a campaign to attain national prominence, the reigning Illinois Horse of the Year has a score to settle on the home front.

Hawthorne Race Course’s Night of Champions for state-breds is the main event on the Illinois racing calendar and the most riveting of the 11 championship races on Saturday night’s program is the $160,080 Robert F. Carey Memorial for 3-year-old pacers in which Fox Valley Gemini will attempt to avenge the only two losses of his 19-race career.

They came in August at Springfield — a second in the Illinois State Fair Colt Stakes elimination and a fourth in the final — and both were at the heels of You’remyhearthrob, the most menacing of his nine opponents in the Carey Memorial.

Casey Leonard, who has driven Fox Valley Gemini in all of his races for 79-year-old owner Jim Ballinger, sensed something was wrong in the Colt Stakes final and he was right. When the gelding was scoped, the diagnosis was a viral infection.

Casey’s 67-year-old father, Terry Leonard, trains Fox Valley Gemini and considers him one of the best horses he has conditioned in a career that spans more than four decades.

Terry Leonard gave the son of Skyscraper out of the Cole Muffler mare Epona some time to recuperate at his Rush Creek Farm after the out-of-character races in Springfield, then let him gradually work his way back to regular training.

On Sept. 6 Fox Valley Gemini returned to Hawthorne for a qualifying race that was his first outing following the Aug. 15 fourth-place finish in Springfield.

That performance assured driver and trainer that he again was ready for prime time, which in this instance was the fourth and last leg of the Carey Memorial eliminations on Sept. 14.

The defending champion Illinois Horse of the Year looked the part, delivering a decisive five-length victory in 1:51.1.

“He looked awfully good,” Ballinger said. “If he races that well Saturday night I don’t think the other horses can handle him.”

Casey Leonard’s critique: “I was happy with his performance. I’d put it among his best races.”

It was a better performance than You’remyhearthrob’s compelling conquest in the other Carey elimination. In rebounding from an Aug. 29 second at the DuQuoin State Fair that followed his two big races at Springfield, the gelding trained by Brett Wilfong and driven by his son, Kyle Wilfong, won by 1 1/2 lengths in 1:52.3.

This will be the racing equivalent of baseball’s “rubber game” because at Hawthorne in July, Fox Valley Gemini got the best of You’remyhearthrob in the two races that prefaced their Springfield encounters, relegating him to second and then third.

While You’remyhearthrob seems to be obsessed with pacing on the front end, Fox Valley Gemini has proven to be equally effective on the lead or rallying from behind.

Last year on the Night of Champions, Fox Valley Gemini made his ninth and final 2018 start in the Incredible Finale for 2-year-old male pacers. Leaving from post 9, he was fifth at the quarter and sixth at the half-mile and three-quarters before surging to the lead and drawing off for a 3 ½-length triumph in 1:53.4.

This year, tentative plans call for Fox Valley Gemini to leave Illinois for the first time and compete in open company. The races for 3-year-olds that Terry Leonard has in mind are Hoosier Park’s $65,000 Circle City Pace on Oct. 26 and $200,000 Monument Circle on Nov. 2.
Up to now, all of his races have been against other Illinois-breds at Hawthorne and Springfield.

“He’s a very nice horse here in Illinois, but I don’t know if he can go with the open horses,” cautioned Casey Leonard. “Time will tell. We hope to find a prep race for him at Hoosier before the Circle City.”

Regardless of how Fox Valley Gemini fares, he has vastly exceeded expectations.

His dam, Epona, raced for Ballinger and wasn’t a high profile pacer. After she ended her career with earnings of $63,311, Ballinger made a deal with Dr. Kenneth (Doc) Walker of Fox Valley Standardbreds, sending her to the breeder for a breeding fee. A few years later, Ballinger bought Fox Valley Gemini as a yearling from Walker for $2,700 at the Fox Valley sale.

When Fox Valley Gemini came to Rush Creek Farm (after being broken and trained by Ballinger’s son, Brett, at the Carrollton fair grounds) he showed some promise, but his workouts were hardly auspicious and when he went to Hawthorne for a qualifying race in mid-June he finished sixth.

Once he began competing in pari-mutuel races, it was a completely different story. In short order, he demonstrated that he was destined to become Illinois Horse of the Year.

While Fox Valley Gemini looks like he’s on the brink of defending his championship, Casey Leonard already has won his second straight driver title at the summer meet by a landslide margin. Going into the final five nights of the Chicago sulky circuit’s only meeting that will end Monday, he has 195 winners to 83 for second place Kyle Wilfong.

Meanwhile, Terry Leonard, who finished second in the trainer standings last year, has this year’s championship locked up with 53 winners to 39 for runner-up Ronnie Roberts.

The Leonards have a strong candidate going for them again this year in the $136,142 Incredible Finale. His name is The Bucket and the 2-year-old colt by Sagebrush out of the Cole Muffler mare Chevie in Motion has seven wins, a place and two shows in 10 starts for owners Ken Rucker and George Dramonas.

In his final elimination leg The Bucket was third behind Meyer On Fire and Coming Up.

“He was a victim of the trip,” Casey said. “I raced him hard (on the lead) the week before. This time I wanted to race him off the pace. There were extremely slow fractions and we got stacked up on the first turn. When he did move the pace had increased.”

Casey is driving one of the night’s most interesting horses, Loussolataire, in the $122,504 Fox Valley Flan for 2-year-old filly trotters. Competing mainly at the fairs, Loussolataire has won 16 of her 31 starts for trainer Steven Searle and owner Steven Renard, making her the winningest 2-year-old in North America.

Leonard became her driver on Sept. 7 when she finished a stalking second in a leg of the Fox Valley Flan series and he was back in the sulky a week later when she took her elimination race, rallying along the rail to win at the wire.