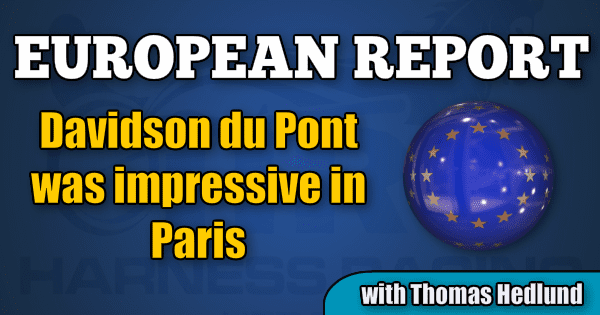 The 5-year-old son of Pacha du Pont won Criterium des 5 ans ($250,000) at the same track two weeks ago and Bazire seems to, once again, have managed to dvelop a trotter with high international status.

In the Prix de l’Etoile, Davidson du Pont started 50 meters behind the front horses (3-year-olds) but despite the tough conditions, Bazire’s trotter was outstanding when the top driver decided to give his horse the order to attack with a little less than a half mile to go in the 1.4 mile long race.

Davidson du Pont easily disarmed leader Fabrize du Gite before the last turn passed into home stretch and the 5-year-old came home in an impressive mile rate of 1:54, which is in tangent with the earlier stakes record set by Balero Love from 2016.

The monté race (racing under saddle) Prix de Normandie ($280,000) is a tough mission for the 5-year-old French bred colts and mares. The distance of 3,000 meters (approximately 1.9 miles) under saddle requires great condition for both horse and jockey and the winning duo Durzie (Jag de Bellouet) with Alexandre Abrivard showed that they were at the right spot at Vincennes on Saturday afternoon.

Jag de Bellouet mare Durzie was moved to the front with 3/4 of a mile to go and from the lead she comfortably cruised away to the victory in mile rate 1:58.4 over the large distance.