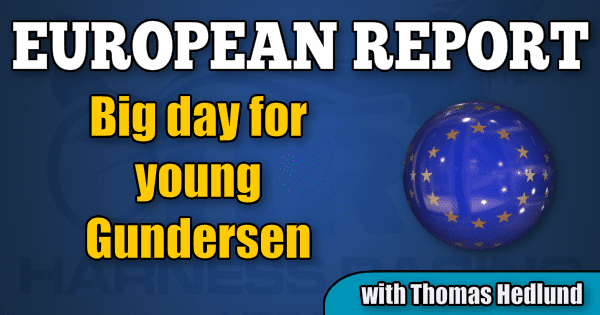 At only age 22, Magnus Teien Gundersen is already one of the most promising young drivers, and future trainers in Norway. On last Sunday’s impressive race card at Bjerke racetrack in Oslo, Norway, the young driver was noted for victories in both the Derby for 4-year-olds ($482,000) and in the Kriterium for 3-year-old mares ($200,000).

In the Derby, Gundersen drove his father’s (Geir Vegard Gundersen) Gretzky B.R. (Quite Easy) with whom he early grabbed the front position and easily cruised away to victory in mile rate 1:58.1 over 1.7 miles.

”This is just crazy. I had some hope that we could win the race, but then doing it just feels wild,” said Magnus Teien Gundersen after the race.

Gretzky B.R. was allowed to slow the pace down midway through the Derby and that was certainly one factor that played an important role regarding the outcome of the race.

“We could play our game pretty much during the race and in the end it all was an easy path to victory. I’ve never before felt like this after a victory,” Gundersen said.

And Magnus Teien Gundersen had already picked a big win during the day at Bjerke, since stablemate Hillary B.R. (Muscle Hill) won the Kriterium for mares in mile rate 1:59.1 over 1.3 miles.

Hillary B.R. got to the lead after 600 meters while stablemate Blueridge Sun (Revenue) and Geir Vegard Gundersen seemed pleased with position behind the new leader. Hillary B.R. has now won seven-of-seven lifetime races and the Muscle Hill mare is without doubt the best 3-year-old mare in Norway.

The success for the Gundersen stable was total when Geir Vegard finished second with Blueridge Sun and in total, they collected more than $540,000 to the owners during the Saturday’s and Sunday’s race cards at Bjerke.

In the Derby for mares ($241,000), Frode Hamre led the major part of the race with his Calina (Archipelago) and on the outside the duo had stablemate Normandie Royal (Orlando Vici). The two Hamre horses duelled hard the last 5/8ths of a mile and Celina kept her head ahead of Normandie Royal the whole way. She came home in mile rate 1:59.3 over 1.3 miles.

”I wasn’t that happy about her performance in the elimination so I let her race with shoes today, which worked out so much better. Celina has both strength and speed,” said Hamre after the
victory.

Marcus Lindgren-trained Stoletheshow (Dream Vacation) was an upset winner in the Kriterium for 3-year-olds ($180,000). Norwegian driver Erland Rennesvik has worked for Swedish trainer Marcus Lindgren and was entrusted behind the son of Dream Vacation in the Kriterium. From third over, the duo caught heroic trotter Catherine’s Chevy (Catherine’s Cavalli), who raced outside leader most of the race, just before the wire and Stoletheshow came home in mile rate 1:58 over 1.3 miles.

”Undescribable! The horse had such bad weeks before the Kriterium and had only four serious training days before the elimination, but he is an exceptional trotter. My expectations rose when I noticed that the pace was set high in the front and I just want to thank Marcus Lindgren for the chances he has given me,” said Erland Rennesvik.

The Arqana Trot sales was held at French Deauville last week and a new sales record for a yearling was set.

The half-sister of Bold Eagle (Ready Cash), Hunter Valley (Charly du Noyer—Reethi Rah Jet) was sold for the price of 400,000 euro, which is the highest price for a yearling in Europe so far.

Matchpoint Pellini (Bold Eagle—Prada Pellini) and Admiral As (Ready Cash—Galiera As) were both previous record holders with 360,000 euro from sales in Europe last year.

The ITS Yearling Sale was held in Milan, Italy on Wednesday and Thursday this week and during the first day a son of Father Patrick got the highest bid for the day.

Brother Wise As (Father Patrick—Arch Magic) got out of the auction area with a price tag of 230,000 euro (approximately $267,000) while 90,000 euro was paid for Muscle Hill son Beautiful Power (out of Lover Power).

The race is open for trotters that has collected most points during the last 12 months period and Propulsion was ranked in top since Bold Eagle retired from the race. Propulsion, a son of Muscle Hill, can look back at an impressive season with victories in Åby Stora Pris, Hugo Åbergs Memorial and Årjängs Stora Sprinterlopp among others. He got to pick post position first in the field of 12 horses.

Readly Express and Propulsion were almost inseparable in Åby Stora Pris and on Sunday Readly Express will again have Björn Goop in the bike. Goop drove the son of Ready Cash in Paris when the duo succeeded in Prix d’Amérique.

Aubrion du Gers (Memphis du Rib) won the final of Masters in Europe last year, but trainer and driver Jean-Michel Bazire decided to let his gelding race in his home country instead of making the journey to Sweden and last Saturday, Aubrion du Gers showed his great capacity when he won Prix d’Eté ($232,000) at Vincennes racetrack in Paris.