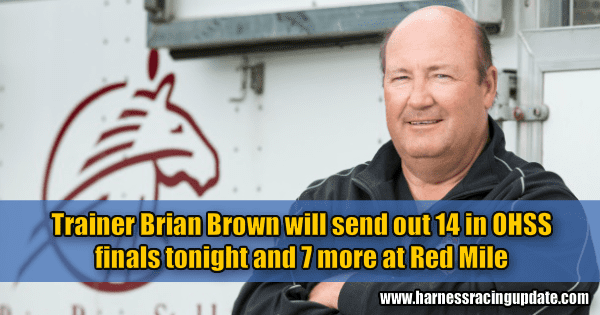 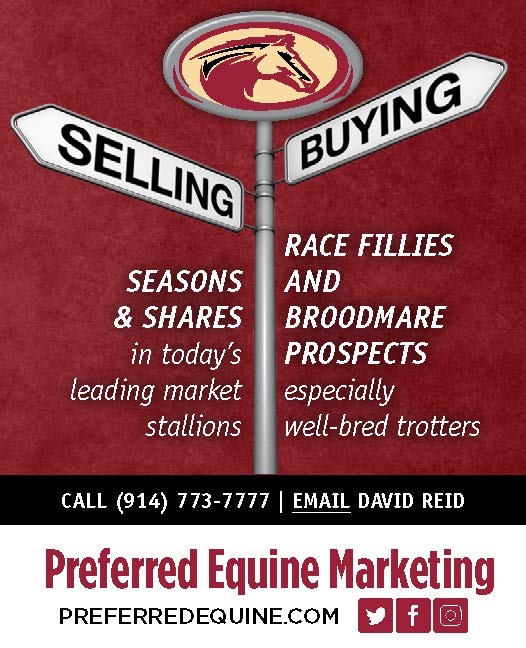 The 2017 Trainer of the Year has 14 Horses in the Ohio Sires Stakes Finals and seven more racing in Lexington.

In a two-and-a-half hour period of time tonight, trainer Brian Brown will send 21 horses postward in just eight races in the Ohio Sire Stakes (OHSS) Finals at Scioto Downs and legs of the Kentucky Sire Stakes at Lexington’s Red Mile.

The 2017 United States Harness Writers Association’s Trainer of the Year was modest about the accomplishment.

“It’s the owners for putting up the money and getting decent horses,” said Brown.

The Delaware, OH-based conditioner qualified 14 horses for the $275,000 OHSS Finals in the four pacing events, including five of the nine freshman colt pacers.

The quintet is led by Smackitwithahammer. The McArdle—Higher Standards gelding has two wins in five career starts for owners Country Club Acres, Joe Sbrocoo and the William Robinson Estate, but comes into the final off a final leg victory in 1:52.3h and with some momentum.

“(Smackitwithahammer) has come around real late. He had some problems. He needed to be gelded and we finally did that and he finally came around. He’s kind of the dark horse of the bunch because he has been pretty average all summer and he has turned into a nice horse. He drew the best and I am sure Trace (Tetrick) will put him in a good spot,” said Brown.

Brown sends out four in the 2-year-old filly pace, highlighted by High Reward, who will leave from post #7. The Yankee Cruiser—Enhance The Night filly owns a 1:53.1f mark and has earned $59,075 for Country Club Acres, Joe Sbrocco & L&H Management Services.

‘(High Reward) is probably the nicest out of the four, but drew bad. The best three in the race drew the 1, 2 and 3. She is in a bad spot there. Hopefully, her and Ronnie (Wrenn, Jr.) can make it work and they can get in the race somewhere without spending all of her trying to get there,” said Brown

As the finals turn to the 3-year-olds, Brown will have three chances to win the filly pace with Smiley Dragon (PP #2), McPansy (#4) and Prsntpretynperfect (#7).

“All three of those fillies, any one of them I think can win if things work out alright, said Brown “Smiley (Dragon) is coming off a pretty good race two races ago. McPansy has been off quite a while. She had a bout with tying up but raced good last week. Prsntpretynperfect qualified really good the other day.”

The final OHSS final will be the sophomore colt pace. Brown has a pair of 12-1 shots with Slick Mick (#2) and Cinnamack (#7).

“That is my worst race. They are both coming into the race not as good as they were earlier this summer. It turned into a really tough race… Lather Up, Bounding Dragon and Rockathon drew well. I need a lot to right for me and things go wrong for a couple of others to be able to do some good.

Following the OHSS action, Brown and Emerald Highlands Farm will turn their attention to the $30,000 filly and mare open pace and the 2017 Dan Patch Award winning Blazin Britches, who is making just her sixth start of the season.

“We have had a lot of trouble with her. Her feet got real sore. She had some time off and has come back decent. We changed some shoes and hopefully everything is in order,” said Brown.

Nearly 200 miles south of Scioto Downs in Lexington, KY, Brown will have seven freshman pacers competing in $30,000 legs of the Kentucky Sires Stakes at the Red Mile.

As the Midwest braces for the rain and remnants of Hurricane Gordon, rain is expected at both the Red Mile and Scioto Downs. Brown doesn’t have any concerns with the potential sloppy conditions.

“The horses will be fine, it is us who will have to deal with it.”