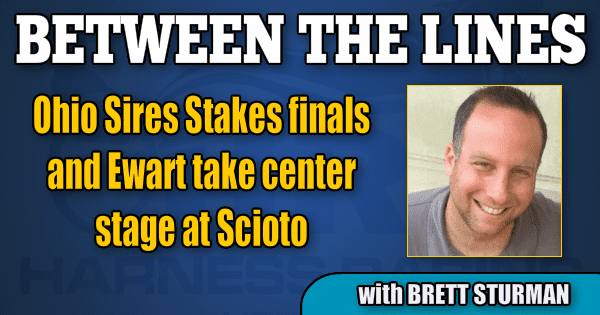 Eight Ohio Sire Stake (OHSS) finals and the Jim Ewart Memorial total nearly $2.5 million in purses to be dished out Saturday night at Scioto Downs. Here’s how I see the contenders for each of the races:

ONLY TAKE CASH is only a neck away from a perfect 7-for-7 record and seems the most advanced of these young filly trotters at the moment. Daughter of Cash Hall has jogged at the shortest of prices in all her recent starts and there isn’t any real reason to play against. VIVI D beat the big fave in early July at Northfield, but hasn’t been able to replicate the feat since; will at least be in a striking position from the rail. SEE ME SPARKLE swept off cover last week for the 1:57 win; could close late for a share as one of two Broadway Hall fillies in here.

ROSE RUN UPTOWNGAL can spring the minor upset while playing the role of beaten favorite. Burke lass is in the mix every race and her versatility will give Page some options from the favorable starting slot. HIGH REWARD is the one I’d consider with the greatest chance out of the four Brian Brown trainees in this OHSS final. She took many of these down the road two back in 1:53.1 at this track and Wrenn may take an early shot from this spot. RYLEEE ROO pounced last week after getting the trip and could do so again now; went a big trip three back in a race won by #3.

Most of these freshman colt pacers have taken turns beating each other the past couple of months and this seems like one of the more open championship races. ROCK CANDY has the post advantage on most of his rivals and plenty of early speed; gets the call with the tactical edge. ROSE RUN ULYSSES bottomed them out in 1:52 last out at Northfield which was the ideal bounce back type of mile from his race prior; just needs to overcome the post. SMACKITWITHAHAMMER seems to be in line for a share and HIGH ON PAYDAZE was no match last out for #8 despite being heavily backed. SEE YOU IN TUSCANY goes first time Lasix after a promising start to his career in July.

YES won going away last out in what was his first start in three weeks. Manofmanymissions gelding moves to the outside, but any repeat of his last would give him a big shot at a square price. HOMER HALL erupted off cover last week to post a new career best; a winner in 7 of 9 races this year needs to overcome the outside post 9. WITTYVILLE posted a big number two back at Northfield and had no shot last out in catching the tripped out #7; could offer double digit odds for Burke. LANE OF STONE has only lost once in 7 career starts but will need to go faster than he’s gone before; short priced threat from the rail.

PRSNTPRETYNPERFECT has won three of her last four races in the 1:51 range and on paper is fastest. The obvious concern is not having raced in a month, but that qualifier last week at Northfield signals that all systems should be on go; best. BARON REMY was second to Youaremycandygirl a few back and most recently shows a sub :27 final quarter from Northfield two back; will be blasting when the gate lets them go. MCPANSY comes off an ideal prep for this race and picks up Dave Miller; likely to attract some attention on the driver change. KAY AGAIN is fast when right and LILY GRACE shouldn’t be overlooked despite lower profile connections.

SPUNKY BOTTOM GIRL went right to the top in her most recent at Northfield and there’s no reason she can’t come right back and win again. That 1:54.2 win was impressive and she looks to be finding her best form; just as good a chance as any. LOOKING FOR ZELDA is a classy type who’s been strong since the very beginning of her career; the obvious one to beat. SESAME is likely to show some early speed as she picks up Miller and is more than capable of being in the thick of late. IMPINKTOO is a filly that can be used underneath.

NORTHMEDO MISSION hasn’t had the easiest trips in some of his recent starts and is worth a swing at his anticipated price. He was second to the big fave in here three back, and that was after he was parked three-wide to the quarter in that race. TWO O B WONKENOBI will be the heavy and deserving favorite as he seeks his fourth straight win. Guaranteed to be on the front end for driver Wrenn. PASS THE VAPE has only missed the board once all year and is the leading seasonal money earner in the field. MVP LUKE is just 2 for 19 in his career but he generally outraces his odds; deserves some respect. MISSION ACCEPTED looked special when he won a Beal elimination in June but has since gone off form; makes his second start on Lasix in hopes of a turnaround.

For all the misfortunes that LATHER UP has run into in recent months, he does seem to find a safe haven at Scioto. He hasn’t raced since Aug. 18, but for him that’s probably a good thing; wins if he minds his manners. BOUNDING DRAGON went one of the more game trips you’ll see against the heavy favorite three races ago and then followed that up with another OHSS win; the likely beneficiary if Lather Up falters in any way. ROCKATHON pulled the 20-1 upset last out and now moves into the rail position as well as a noticeable driver change; angles to like. SEEING EYE SINGLE picks up Wrenn for Burke.

MCWICKED invades the Midwest fresh off his first-over win against Lazarus and it would be tough to go against him following that impressive performance. That win came on the heels of a :25.2 final quarter sprint in the Dan Patch and he’s generally better than these; in good form, too. SPLIT THE HOUSE is sharp right now for Oakes and has raced bravely in his last three races. NUCLEAR DRAGON comes off a 1:48.3 over this very track last week and now gets the ultimate test for class – can he go with these? WESTERN JOE thrived at the Meadowlands all year and beat McWicked fair and square on Hambletonian Day; I’d expect Page to be aggressive from the rail.