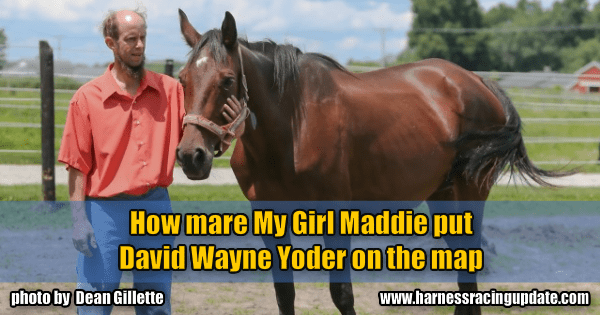 The mare’s latest star is Tellitsassymae, an Indiana Sires Stakes winner in a national season’s best of 1:51.1.

David Wayne Yoder didn’t have to wait long to find out how freshman Tellitsassymae had fared in the $75,000 Indiana Sires Stakes final Wednesday night, July 11. Not long after the filly crossed the wire first at Hoosier Park Racing & Casino in a then national season’s record of 1:51.1 the phone started ringing. While Ernie Gaskin trains the Tellitlikeitis lass for a partnership that includes his wife, Darla, daughter, Emily, and Hank Blackwell, Yoder bred and raised the filly at his Shipshewana, IN farm.

“Immediately after the race I had several phone calls,” Yoder said. “It was great. They were so excited and we were excited. It was unreal. I watched the replay three times. To see the way she did it, it was just like she was not going to lose that night.”

Tellitsassymae is the latest product from Jenna’s Beach Boy mare My Girl Maddie to reach the winner’s circle. Now 19, the mare has been a resident at Yoder’s farm since the age of five, fresh off the racetrack and ready to begin her breeding career. Breeding commercially, however, is a tough proposition, and Yoder took his lumps early on with the mare. In her first two seasons, she was bred to Kilowatt and Electric Yankee. In the sale ring, My Girl Maddie’s foals brought $13,500 and $2,500, a good return on a $2,500 investment. The third foal, an Allamerican Captor colt, would provide a hard lesson. With his two siblings yet to reach the track, the yearling brought a mere $900 at the 2009 Indiana Select sale and left the breeder at a crossroads. George Apple had previously called with interest in the mare, but Yoder had not relented in parting with her. Now, he was ready to cut his losses and move on.

“I just called him back and told him if he wanted the mare he could have her. I don’t want to breed her again,” the breeder recalled. “I can’t have mares that sell babies for 900 bucks. You just cannot make money. But it turned out to be my humblest moment and my proudest moment.”

The paltry sale price might have proven discouraging, but then a funny thing happened. Jammin Joshua, My Girl Maddie’s third foal, began to win races. As a freshman, the colt lined up behind the gate 11 times. He hit the board in all but one start, winning six times and taking a mark of 1:52.2 at Indiana Downs. In the care of Gaskin, Jammin Joshua capped the season with a victory in the $200,000 Indiana Sires Stakes final. Yoder had watched the colt pass through the sale ring with very little interest from buyers, but now his on-track exploits were attracting much attention. Over the course of six seasons, Jammin Joshua earned $650,000 for Emily Gaskin and established himself as one of the top free-for-all pacers in the Hoosier State.

“With the breeders awards they didn’t have a cap, and they paid after every win,” Yoder explained. “Every other week I was getting these breeders awards. It definitely allowed me to buy better mares. He just made this farm.”

Now owned by Apple, My Girl Maddie remained with Yoder, who boarded her for the Michigan-based horseman from June 2010 to January 2014. When he decided that he no longer wanted to pay boarding fees on the mare, he gave her back to Yoder. This time, My Girl Maddie was placed in the ownership of his wife, Rebekah, and Kelsey Wagner, self-professed farm manager and close friend of Rebekah that the couple lovingly refer to as their adopted daughter. Under Apple’s control, the mare was bred to Wearable Art and Dali, and combined with a Dave Panlone colt, My Girl Maddie was consistently producing winners. In 2014, Yoder bred her to Rockin Image, and the next spring he dropped another colt.

“Her offspring all have personality. I never realized horses had that much personality until her. They’re king of the hill,” he said. “The world revolves around her. She’s definitely queen of the farm. She is gentle as a pony, but in the pecking order, she’s at the top. If I go out to grain, she is always the first there, and she will chase the other mares away. She will get her share and then the others are allowed. When we feed, she is the first to eat. All of her babies are that way.”

My Girl Maddie’s dam, Celebrity Girl, was a $500,000 winner by Abercrombie, so when it came to breeding, Yoder wanted to stick to the No Nukes/Western Hanover line when selecting a sire. The methodology has worked. The Rockin Image colt, cataloged as My Oscars Arockin, sold for $55,000 at the 2016 Hoosier Classic sale. It was a significant departure from his experience with Jammin Joshua.

“He was the strongest yearling I’ve ever sold. The last hour before he went into the ring, you could feel the electricity,” he said. “The way people looked at him, it was exciting knowing you’ve got a good yearling.”

Purchased by Tom Pollack and Jeff Cullipher, the colt was renamed Tom’s Arockin, and debuted last season. He won in 1:53 as a freshman, capturing an ISS elimination and racing second in a $75,000 final, but only made four starts before being shelved with an injury. This season he has finished second in six of nine starts, race timed in 1:50.2. Tellitsassymae, by contrast, was from the first crop of Telliltlikeitis, bringing a $30,000 final bid. She set the national season’s mark in only her third pari-mutuel start. With a trio of victories to her credit, the filly extends a streak of seven consecutive foals to reach the winner’s circle.

Yoder is now preparing an Always A Virgin filly for October’s Hoosier Classic sale. Named Allthewaymae, the yearling is only the third filly from My Girl Maddie. She foaled a Rockin Image colt this spring. At her advanced age, Yoder knows the mare’s time as a broodmare is running out. She has only missed once over the last 12 breeding seasons, and she is currently in foal once again.

“She always gets in foal, full heat. I’ve never had a problem breeding her,” he said. “She is 19 this year and she bred right back. I asked my veterinarian about when I quit with her. He said, ‘She’ll let you know. As long as she is fertile and good to breed, she’ll let you know when she’s done.’”

Whether through the sale prices her yearlings fetch in the sale ring, or through the breeders awards reaped when the foals are racing, My Girl Maddie has had a tremendous impact on Yoder and his family. Her success has afforded them the opportunity to buy more and better broodmares and build their program. It is one of the reasons she will forever have a home at the northern Indiana farm.

“She’s the one that really got me started. Basically, she put my name on the map,” stated Yoder. “She’ll never leave the farm. I’ll bury her here.”