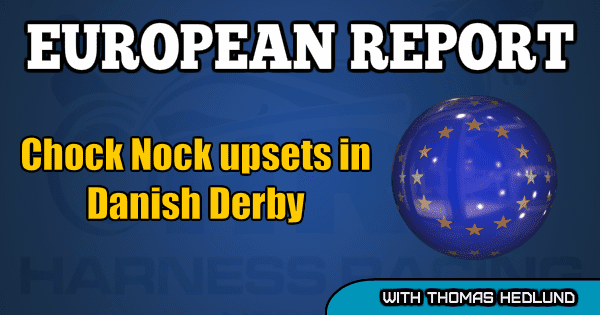 The Danish Derby for 4-year-olds in Denmark was held in Copenhagen, at Charlottelund racetrack on Sunday (Aug. 26) and Swedish driver Björn Goop made great contact behind Steen Juul-trained Chock Nock (S Js Photo).

The duo started from post 12 behind the gate in the 3,000-meter long race, but that didn’t stop Chock Nock from entering the winner’s circle. Björn Goop made a move after the first 5/8th of a mile and landed outside leader Cuba Libre Ice.

Cuba Libre Ice couldn’t defend himself when Chock Nock was given order to put it in a higher gear in the last turn. The son of S Js Photo had, in turn, to fight attacking opponents in the home stretch and with Goop’s effective finish drive, Juul claimed his second Derby victory in a row following a win by Bvlgari Peak in 2017.

“Chock Nock has been very immature in his earlier starts, but today we raced without shoes and with earplugs for the first time. The horse underperformed in the elimination, without any good explanation and it was an eminent move Björn Goop did, when he left his position and chose to pick the position outside the leader from where he could steer the race,” said Juul after the victory worth approximately $100,000.

The $437,000 Swedish Derby is scheduled at Jägersro racetrack on Sunday, Sept. 2 and after the eliminations the race is an open story where, generally speaking, any one of the 12 contenders can win.

Three of the biggest names before the eliminations disappeared at Jägersro last week. Very Kronos and Villiam were the heavy favorites and both of them made early breaks in their qualifications. Coin Perdu had a bad day and is out of the game on Sunday.

Instead, a son of Maharajah, trained by Pasi Aikio will be the horse to beat at Jägersro. Who’s Who (Maharajah—Reality Pride) will be driven by Örjan Kihlström and the trotter, who is bred by Menhammar Stuteri (Margareta Wallenius – Kleberg) can repeat what his father Maharajah did in the Derby 2009.

The distance is approximately 1.7 miles.