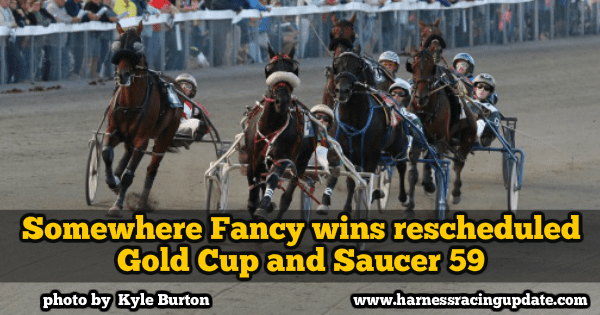 Gold Cup and Saucer day 2018 went from soggy to sloppy to postponed, all before the Saturday afternoon card even got underway. Red Shores Charlottetown opted to move the daytime races to Sunday, although the original plan was that the evening card, or at least the Guardian Gold Cup and Saucer itself, would still be raced Saturday night. With 37.5 mm (almost 1.5 inches) of rain falling locally Aug. 18, plans were scuttled just after 2 pm, when a special media release stated that both of Old Home Week’s final cards were rescheduled for the next day.

This marked the third time in the race’s history that it had been postponed until Sunday due to weather, and the first it had been conducted on a Sunday night.

Attendance did not suffer on the new date. Red Shores Charlottetown waived gate admission Sunday and parking becoming available in the racino lot after the departure of the carnival. $62,905 was wagered on 10 afternoon races, while the 14 races on the Gold Cup betting menu attracted $228,695. (Last year, the night after the World Driving Championship finals at Charlottetown, the 2017 Gold Cup and Saucer and its 13 accompanying races drew $253,996 in wagering).

On the night of Aug. 19, fans packed the grandstand and apron for an eight-horse final with no decisive favorite. Bettor’s choice Rockin in Heaven had drawn the inside post, but had been edged out by René Allard trainee Somewhere Fancy in their 1:51.4 Cup Trial, despite pacing a 26-second closing quarter — the fastest in the track’s history. A second Allard horse, Bet On Brett, had won the second Cup Trial in 1:51.2 Monday night, over Lincolnjames, a pacer owned by one of driver Anthony MacDonald’s The Stable fractional groups, and third-place Asap Hanover, driven by Jody Jamieson for trainer/wife Stephanie Jamieson.

New catch drivers were needed for the postponed final, as three reinsmen had Sunday assignments at other tracks. Gold Cup and Saucer Consolation-winning Ken Arsenault got the call on Lincolnjames when Anthony MacDonald fulfilled PASS obligations at Pocono; with Louis-Philippe Roy in Quebec for the Prix D’été, Brad Forward was assigned to handle Bet On Brett.

Under the lights and an overhead drone, it was Forward and Bet On Brett who led the charge into the tight first turn, with Rockin in Heaven (J Bradley Harris) settled safely in second as Asap Hanover self-destructed in pursuit of the leader. Jody Jamieson steered the breaker wide of an advancing Rose Run Quest (Marc Campbell) and Somewhere Fancy (Simon Allard) while the field headed to the quarter pole.

“Movement up front! There’s a brouhaha in the Gold Cup and Saucer!” exclaimed announcer Vance Cameron when Rockin in Heaven stepped out to take his shot at Bet On Brett, getting the “Boom!” call in a :27.2 opening quarter. Approaching the half, Somewhere Fancy emerged from fourth to hunt down Rockin in Heaven, still in command at the :54.3 half.

By the three-quarter mark, Somewhere Fancy had laid claim to the front and began to open up on Rockin in Heaven and the second-over Always N the Money (Travis Cullen). Allard was flat in the bike when his horse hit the stretch (after a 1:23.1 clocking at the three-quarters); Rockin in Heaven and a fast-closing Rose Run Quest could do no better than second and third respectively, three lengths behind the winner as he crossed the wire in 1:50.4.

The time did not broach the 1:50.1 Charlottetown track record, established by René Allard’s Ys Lotus in the 2016 Gold Cup and Saucer. (It’s still a shared Canadian record for geldings on a half-mile track, as well.) Post-victory, Simon Allard called his career-first Gold Cup and Saucer win “a speed race”, and shared his satisfaction that Red Shores had opted to reschedule for Sunday night’s fast conditions, rather than send the field forward in Saturday’s slop. He also praised the level-headed Somewhere Fancy for a “classy” response to the large, enthusiastic crowd and unique pre-race pageantry.

The blue-hooded pacer had the composure of a circus horse in the win, as driver Allard kicked both legs skyward in the sulky when they crossed the wire.

Simon Allard added that he had not expected to break the track record, let alone the 1:50 barrier, because winds had picked up and the temperature cooled down before the start.

Somewhere Fancy is a Somebeachsomewhere son, out of the Artsplace mare Fanciful Hanover. The 7-year-old stallion is owned by John Mehlenbacher of Oakville, ON. A winner of 8 of 22 races this season, the pacer was slated to resume competition in the USA, most likely at Yonkers, after leaving PEI.

René Allard is third among North American trainers by winnings ($3,962,105 US) this year. “We’ve won a lot of races for a whole lot more money, but this is my favorite race in the whole world,” he said in the winner’s circle. “Winning this time, with my brother, makes it extra special.” The St-Esprit de Montcalm, QC native often evokes controversy, but his contribution of strong entrants to the Gold Cup and Saucer Trials over the past decade helps bring crowd-pleasing excitement to the main event. “People around here are just amazing,” he added. “As long as I live, I’ll be here every Old Home Week.”