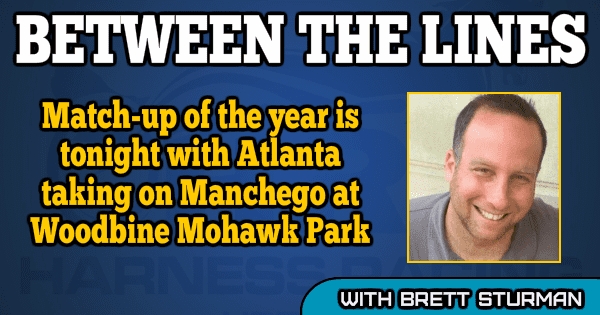 The Hambletonian champion will take on the defending divisional champ in the Casual Breeze.

When the Hambletonian and Hambletonian Oaks winners square off tonight in the Casual Breeze stakes at Woodbine Mohawk Park, it’ll be only the second time in what will be 21 career starts that the reigning divisional champion Manchego won’t be favored. That’s because she’ll be up against the Hambletonian heroine Atlanta, who makes her first start since that victorious Saturday three weeks ago.

In what can be considered the most highly-anticipated matchup of the year, the battle between Atlanta and Manchego underscores how overpowering the 3-year-old trotting filly division has been in 2018. Atlanta sits atop this week’s Hambletonian/Breeders Crown poll while Manchego sits at #4, and no other 3-year-old trotter – including colts and geldings – is even in the top 10.

One may wonder with the elevated status of Atlanta, if Manchego’s driver Yannick Gingras is going into the race with a feeling of something to prove.

“No, not for me, anyway,” said Gingras. “I just really believe in my filly and I don’t think she’s done anything wrong. She had that one break at Pocono, but other than that she got beat in 1:49 that one time and who’s to say that Atlanta wouldn’t have gotten beat in that same time. And then last week we got outsprinted home (in the Zweig) and she’s been really good in all of her starts – same thing for Atlanta.”

In nearly every race for Manchego it’s been obvious that she was the best horse heading into it. The fact that she’s gone off at odds of 1-9 in almost half of those starts speaks to that fact. But the race against Atlanta is far less clear cut as to who is better. Still, Gingras isn’t showing any signs of doubt.

“I think I have the best horse. That’s my personal opinion,” said the driver. “Of course Atlanta has the inside and we have the outside, so that’s not to our advantage, that’s for sure. But I still believe I have the best horse and I’m sure she’s going to put a big race. But I also know the other one is ready for a big race as well.”

While this is race is bound to be one of the can’t-miss races of the year, Gingras points out that it’s still just the first of what could be many more races between these two fillies.

“It’s definitely a big matchup, but it’s not like it’s the biggest purse there is to race for. The biggest matchup is the Elegantimage final, and that’s the race I really want to win. Of course, (the Casual Breeze) does look like a two-horse race on paper, the way I see it, anyway. So, it is a big matchup and I always want to win every race that I’m in, but I think it’s the Elegantimage that we’re both pointing towards.”

The Elegantimage that Gingras referenced is in a few weeks, following this week’s Casual Breeze, then the Simcoe and then eliminations for the Elegantimage. Should the fillies continue to meet each other after their first encounter, Gingras said he doesn’t think that either of them are impervious to the other. “They’re two great fillies and I don’t think either one of them is going to go undefeated against the other one the more they race. I’m sure she’ll beat me sometimes and I’m sure I’ll beat her sometimes, it’s horse racing.”

Starting from post 3, Atlanta is 6-5 in the morning line while Manchego is just a shade higher at 7-5. All other fillies will begin at double digit odds of 10-1 or higher. Who will win? I can’t wait to find out, although the only other time Manchego wasn’t favored was three weeks ago in the Hambletonian Oaks – a race that she won.
Selections: 8-3-1-7

Commenting on his performance in the Dan Patch and how Lazarus has been progressing since in his run up to next week’s Canadian Pacing Derby, Gingras had this to say, “I was impressed with his performance in the Dan Patch. I think it was a tremendous effort from the outside post against a tough field of horses in his first start here after one qualifier. That’s not usually the way we do things here. We bring horses here and usually they get a couple of qualifiers in them and a couple of starts and then you go into stakes races. So, it was a definitely a big step up for him after only one qualifier and to go a mile like that. I know how fast he had trained before prior to the qualifier and it’s not like was training multiple miles in 1:48 – it’s not like that. I know he trained at Jimmy’s farm in New Jersey and I heard he trained tremendous so I think he’ll be ready for next Saturday.”