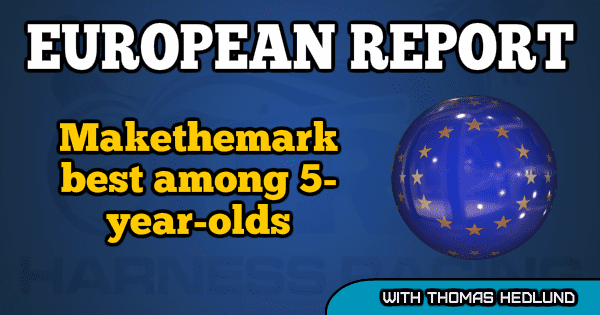 Petri Salmela-trained Makethemark (Maharajah) won the $218,0000 Jubileumspokalen for 5-year-olds at Solvalla Tuesday night and the performance was impressive.

Twelve of the best 5-year-old trotters in Europe was found behind the gate in this year’s edition of Jubileumspokalen in Stockholm and over 1.3 miles the race became a real show for the spectators.

Diamanten, Cyber Lane, Double Exposure, Love Matters and Pastore Bob were all charged for the task and with a race like this, over 1.3 miles on a 5/8 track, the right post positions are important and Makethemark began from post 4 and driver Ulf Ohlsson could just let his horse slip down to the second lane and wait to use Makethemark’s speed in the home stretch.

Love Matters took the lead from Pastore Bob in a heavy first quarter and the son of Explosive Matter early got company from Cyber Lane on the outside.

Milligan’s School attacked from third over with a quarter to go and behind him Makethemark waited for order to attack, a command which was given at the end of the last turn. The son of Maharajah flew the last 200 meters and came home in mile rate 1:53.4.

Makethemark is a talented Swedish trotter that showed early that he belonged among the best in the crop both as a 3- and 4-year-old. Unfortunately for the entourage around the horse, Petri Salmela forgot to engage the horse in last year’s Derby, the biggest target for the 4-year-olds in Sweden. This victory was a bit of a revenge and proof that Salmela has a horse that can challenge the more merited trotters in the elite events in Europe in the future.

“I’ve won many nice races throughout my career as a trainer, but this is the biggest that has happened to me in this sport,” Salmela said.

Makethemark proved already in Norrbottens Stora Pris in Boden in June that he belongs among the top trotters when he seriously challenged Propulsion and got close at the wire.

The European Championship for Mares was held the same night at Solvalla and $98,000 dollars waited for the winner.
Stefan Persson trained and driven Darling Mearas (Cantab Hall) started for the 22nd time in her life and showed her great capacity by winning in a mile rate 1:54.4 over 1.3 miles.

Stefan Persson drove his horse perfectly all the way. From the start he used Darling Mearas’ speed to get to the front, but that position was nothing that Persson was interested in when Alessandro Gocciadoro sent Trndy O.K. forward in second lane. A cover race behind the leader was the best move and Darling Mearas exploded to an easy win.

“This is just incredible and I’m so happy right now. It’s not every trainer that gets a chance to train a horse like this and she’s been doing almost everything right since she started her career,” Persson said.

American-bred Kentucky Futurity winner Snowstorm Hanover (Muscle Massive) hadn’t shown anything extraordinary on Swedish tracks before the Big Noon Pokalen at Solvalla on Tuesday night. Örjan Kihlström steered the 4-year-old Muscle Massive son to a world record over 1,660 meters in a race that had a voltstart. Snowstorm Hanover won in 1:55.2 and got $33,000 for the victory.

In conjunction with the Jubileumspokalen at Solvalla, the Sweden International Yearling Sale was held outside of Stockholm and about 100 trotters were catalogued. Ninety-one trotters were sold and the average price for the yearlings landed on $45,379, which was a proper increase from the last year’s sale.

The highest-priced yearlings sold were Habrik Am (Bold Eagle—Tamla Celeber) and Hefner Am (Muscle Hill—She Loves You) that each sold for $174,000.

Bazire put in the highest gear in Aubrion du Gers before the last turn in the 1.8 miles long race and when in lead before the home stretch, the 8-year-old had to defend himself against attacking Bird Parker. Aubrion du Gers had no problem fending off the attack to win Prix d’Europe for the second year in a row in new stakes record, mile rate of 1:54.3.