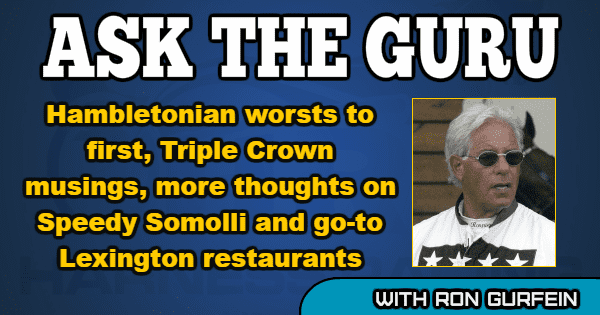 All in this week’s edition of harness racing’s most popular advice column.

I am very impressed that a man that reads Joyce Carol Oates can reduce himself to read my column. That said you took my “decent” comment out of context. It remains my opinion that he was a decent sort in comparison with the likes of Muscle Hill. On another note, I trained a few Speedy Somollis and many Cantab Halls another AJL sire and there was little comparison there. Although Cantab Hall didn’t produce Hambletonian winners, in my opinion he was a better sire. Somali, on the other hand, did sire three Hambletonian winners, actually two and a half (one dead heat) none of which was a household name.

Lazarus delivered as advertised in the Dan Patch. Congratulations to Team Takter. After a brutal trip to the quarter pole he won in hand for Yannick Gingras in a stunning performance. Yannick added after the event that he thought under the right conditions he may pace in 1:46 or better. If the scenario can be achieved, the maestro will get it accomplished.

Team Takter also prevailed in the Millstein with Thinkbig Dreambig, a colt that I selected for a great performance every week and he repeatedly got in trouble. I had no handicapping column this week and a $17 ticket is missed by my readers. Now you know why I am not a gambler.

I have no idea how many of the HRU community are golf fans, but if you are I hope you had the opportunity to see the last 36 holes of the PGA Championship last weekend. Brooks Koepka born in horse country (Wellington, FL) and Tiger Woods finished one-two in a most riveting afternoon of golf. Two unbelievable facts: first Tiger, who has come back from back fusion surgery, shot a record 130 for the last 36 holes of a major and he wasn’t sure he would ever play again and Brooks won his third major at age 28.

Be prepared in November for my yearly anniversary column it will be The Guru Asks You.

I may temporarily change my cloak to the Pacing Guru as my favorite pacing yearling of 2018 De Los Cielos Deo and my favorite performing colt at Sunshine Meadows, Captain Ahab, remain undefeated winning the sires stakes at The Meadows and the Dream Maker final at Woodbine Mohawk Park, respectively. I anxiously await the showdown that I think will occur sooner than later.

Joseph T Schmidt asks: What is the worst placed finish in a Hambletonian elimination of a horse that would go on to win the final? Who was it and what was the year?

In modern times I can only think of one and it would be Probe in 1989 when he dead heated in the race off with Park Avenue Joe. He won the first heat and made a break in the second finishing 9th.

I am sure in earlier times there were some, but to research 90 races is above my pay grade. In today’s world, these type of recoveries are impossible unless there is one division because if there are eliminations the furthest back you can finish is fifth because only 10 horses will be in the final. In earlier years, they decided the winner by what they called summary, where you must win two heats to be declared the winner. Under those circumstances a horse could make a break and finish 19th in the first heat and come back and win the next two and be the winner, the summary would be (19-1-1). Of interest is the fact that both Bonefish (1975) and Steve Lobell (1976) were forced to go four heats to get the grand prize. Steve Lobell almost died in the effort, and due to his near fatal experience, the Hambletonian Society reduced the amount of possible heats to three. I personally have raced three heats in the DuQuoin oven where it can be 100 degrees in the shade and will say it’s not a fun experience.

Peter Lister asks: The Kentucky Sires Stake are around the corner and I will be attending the Red Mile. What are some of the great restaurants you would recommend?

Peter, to begin with, I want it to be very clear you cannot use the word “great” to describe any Lexington restaurant. However if you are adventurous and are willing to travel a bit, there is a gem in Midway maybe a dozen miles from downtown called the Holly Hill Inn. Its founder Ouita Michel is one of the most successful restaurateurs in the state of Kentucky. Fresh seasonal ingredients from local farmers are at the heart of Chef Michel’s menus. Dinners are only served Wednesday through Saturday with an amazing brunch on Saturday and Sunday. They have a wonderful wine list.

As for dinner in the city, there are many fun places where you can have a nice meal. My personal favorite is Le Deauville on Limestone. Mark, the very French proprietor, can be a little too French if you don’t know him, but once you do, all is well. The scene is the best Lexington has to offer and the later you stay the crazier it gets. Steak is always good and many of the French dishes are nice. The mussels are by far their best offering and they have an all you can eat on Tuesday. The salads and appetizers are also worth trying as well as the onion soup.

Dudley’s on Short is by far the best you can do for lunch. There is a formal room for quiet dinning or a business meeting or the bar area, more fun but noisy and not private. There are a lot of good choices for lunch and they have specials each day. I like the North Mill Club or the Cobb Salad. Dinner here is a lively affair also, however the Steak Frites is my only recommendation. Aside from that, you are on your own. Debbie Long, the owner, is a charming lady I have known for 35 years. If you go, please say hello for me.

Tony’s of Lexington is the new kid on the block. Located across from Triangle Park, it’s walking distance from the major hotels. It’s big, noisy, and they serve good steak. It’s a favorite of many horsepeople, so much so that many eat there exclusively during sale time. I suggest reservations at that time of year. The food is good, maybe pricey for Kentucky, but to me it’s like dining in the farm show arena, just not cozy enough.

For sushi lovers, there is a good one. Not far from downtown (maybe 2 miles) — Tachibana, a restaurant owned by Toyota Corp., serves very good Japanese fare. As with most good sushi restaurants, it’s a bit pricey, but the lunch specials are amazing. You can have a fabulous lunch for around $10. It’s on the way to Fasig-Tipton so it is quite convenient. The spicy salmon hand roll is the best.

John Furgele asks: Why are pacing and trotting Triple Crowns not as ballyhooed as the thoroughbred Triple Crown? When Justify won the Derby it was on to the Preakness. When Atlanta won the Hambletonian there was no mention of the Yonkers Trot or any other race.

It would be lovely to be able to make a comparison between thoroughbred and standardbred Triple Crowns. Unfortunately, the thoroughbreds have (this is a guess) 1,000 fans to every one of ours. They have the power in numbers to attract major advertisers and have huge national television coverage. We had Cadillac for a while, but it didn’t last very long. Our sport has become solely a sport of the people, the other is one that attracts the rich and famous and the media all year long. When Bobby Flay, or Rob Gronkowski buy a horse it is of national interest. When George Segal or David McDuffee buy a horse it’s only of importance to their heirs.

In regard to the next race, the Yonkers Trot is a month away, the Preakness is two weeks after the Derby. We are accustomed to racing every week, so it’s hard to accurately assess the probability of a race a month away.

The thoroughbred media are way more attuned to the Triple Crown than the standardbred crew. One reason being that the runners’ Crown is contested in a five-week span, ours at times has been months. This year, the Hambletonian was on Aug. 4, the Yonkers Trot final Sept. 1 and the Kentucky Futurity is Oct. 7 — over a two-month span.

This year’s Hambletonian was such a mess that I wrote that I couldn’t wait till the Kentucky Futurity to see the same group all over again with all things going right. I never thought about the Yonkers Trot as a format to bring out the best in the horse. Half-mile track racing is a way of gambling and in no way a platform to test the ability of the equine athlete. Just the post position draw can pretty much eliminate a contestant before the man says go.

Thanks to all my readers for the kind words Please keep the questions coming in. If you like the columns I write on food, books, movies etc. please email me and if you prefer me sticking to horses, I would be very interested to hear. Your input is very important to me. Have a wonderful week.