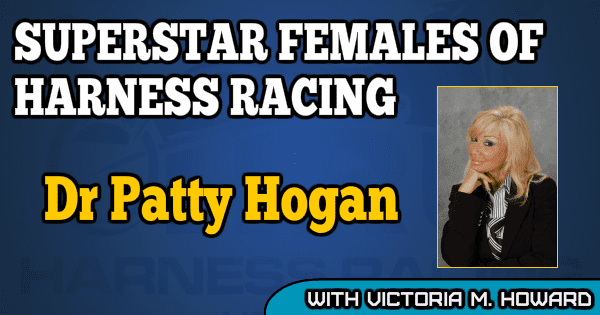 The equine racing world is so lucky and blessed to have Dr. Patricia (Patty) Hogan in its corner. Hogan could have been a model or actress. Not only is she gorgeous (both inside and out), she is also brilliant and one of the best veterinarians in the nation.

Born and raised in the suburbs of Edison, NJ, Hogan knew as a little girl what she wanted to be when she grew up.

“I think I was born in love with horses, for it is the earliest thing I can remember,” Hogan said. “ \I would draw pictures of a horse and gallop around the house whinnying. I was quite the tomboy and preferred playing with GI Joe rather than a Barbie doll.

“From 1993-1996 I attended Texas A&M for my surgical residency. It didn’t help my confidence when my advisor told me, ‘You’re never going to make it.’ That was a tough blow coming from the chief of surgery who referred to me as ‘The Yankee.’ I was the only woman in the surgery program, and most of the faculty was not very receptive to training a female to be an equine surgeon. There were many times I had to bite my tongue when I wanted to act out and had to learn a great deal of patience. It was a very difficult three years, but I’m thankful for the opportunity as it was a great character builder.”

Hogan treats approximately 3,000 horses every year, performing surgery on about 700-800. Besides operating on them, Hogan also sees many of her 4-legged patients for various other ailments such as pneumonia, eye injuries and leg infections.

“The most common standardbred injury I see is pastern fractures (P1). World champion Always B Miki came to me with this and thankfully the outcome was successful. Standardbreds are tougher than any other breed for they can handle almost anything and work around most issues that many other horses cannot.”

Besides Always B Miki, Dr. Hogan has treated some of racing’s best — both standardbred and thoroughbred.

“I’ve been so fortunate in my career to care for some of racing’s best, but the horse who remains number one in my heart is Smarty Jones. His hard luck story and amazing personality were so endearing and taking care of him opened a lot of doors for me.

“Smarty was an unproven 2-year-old who reared up at the Philadelphia Park starting gate and badly injured his eye. He was referred in for an emergency eye removal because it appeared he had ruptured his left eye. When he first came to me his head was very swollen due to air under the skin that escaped through multiple skull fractures.

“His left eye was swollen shut with some bleeding tissue protruding from the lids. After doing an ultrasound and radiographic exams, I was relieved to see that he did indeed have an intact eyeball deep within his skull and orbit. We wrapped his entire head (hence the nickname Quasimodo) and treated him aggressively with medications.

“He remained hospitalized for two weeks, but recovered well. The rest is history. It was certainly life changing for me to be on that incredible ride with him on the Derby trail, remaining undefeated until the Belmont. I owe Smarty a lot, for that is when my career really took off.”

Smarty Jones and Always B Miki are just a few of the superstars Hogan has treated.

“I’ve cared for Tapit, Mine That Bird, Afleet Alex, Take Charge Indy, and of course harness racings champion Always B Miki. Miki is an extremely talented athlete who had to overcome two very serious limb fractures. I first met Miki the morning after the 2014 Breeders Crown when he was scratched after fracturing his LH pastern while warming up. He could not walk on that limb so I personally drove to Showplace Farms to put a splint on the leg so he could safely travel to the clinic for surgery.

“The fracture was displaced and severe, but he recovered nicely. Six months later, he was training well and just about to qualify when he broke the RH pastern. I then repaired that fracture with 4 screws and designed an accelerated rehab program to try to safely heal the fracture, yet keep him reasonably fit to make the fall races.

“Thankfully, everything worked out and Miki made history by winning the Breeders Crown and racing into the following year — pacing the fastest mile in harness racing in 1:46. He is one of the finest equine athletes I have ever known.”

What advice does Hogan have for horsepeople on how to help keep their horses reasonably sound?

“The best advice I could give would be to mix up the training routine,” Hogan said. “The repetitive type of training we see today — training the same direction on a very hard track surface trains the bone to respond in a certain way that can lead to more stress remodeling and stress fracture injuries. However, if you mix up the exercise program like jogging, swimming, turn out in the paddock, Equi-cizer, this allows the skeleton to adapt to different surfaces and stresses so that it can be ready for anything.”

Hogan spends most of her free time at her home, a beautiful 40-acre standardbred breeding farm located in the heart of New Jersey’s horse country she shares with her husband, trainer/driver Ed Lohmeyer. Together they maintain a broodmare band of 10-12 mares and breed and race horses on the circuit.

Her practice, Hogan Equine, is located at the Fair Winds Farm, right across the street from her home where she can be found performing orthopedic and soft tissue surgery, digital radiology, ophthalmology, lameness evaluations and others.

From myself, Always B Miki, Smarty Jones and all the others you have cared for — thank you Patty Hogan for everything you do. And to the chief of surgery, this Yankee is a superstar.