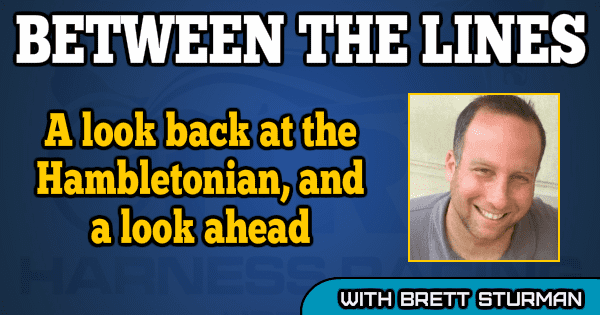 A look back at the Hambletonian, and a look ahead

Atlanta’s win proved to be one of the best Hambletonians in recent memory. Meanwhile, this weekend we have the North American pari-mutuel debut of Lazarus at Hoosier and Later Up competing in the Carl Milstein at Northfield.

From top to bottom, this year’s Hambletonian should go down as one of the more dramatic days of racing that’s been seen in recent memory.

Led by Atlanta, the circumstances in which she won the Hambletonian were nothing short of spectacular. I don’t know if her returning for the final heat after tiring in her elimination ranks up there with Willis Reed hobbling out to court at the Garden for the Knicks in the ’70 Finals, but what an inspiring performance just the same.

After setting unsustainable fractions in her elimination, she was on fumes when caught late by Crystal Fashion. There were some in the ownership group who immediately after the race were right to question if the filly would be able to recover in time for the final heat. Not only did she recover, but she had enough left to cut out a 1:50.4 mile after going 1:50.1 just a few races prior. The cheering of the Meadowlands crowd when she opened up her lead into the stretch was something you just don’t see much of anymore, and it all made for one of the more unique Hambletonians.

In addition to Atlanta, the card was filled with all sorts of drama. Beginning with the other Hambletonian elimination, it was a race won by the upstart Tactical Landing, but will most likely be remembered for the way in which Six Pack missed the finals. It was not one of Ake Svanstedt’s finest moments which I’m sure he’d be the first to admit. The heavy 2-5 favorite caused havoc for others throughout the race before eventually flying up the inside through the stretch only to hook wheels with Classichap (Smedshammer) and miss the final.

Six Pack was in the highest profile situation of favorites that faltered on the day, but by no means was he by himself. It was such a wild day as far as betting went that of the 16 races, only three favorites came out on top. And with two of those occurring in the final two races of the day after much else had already been settled, only a single favorite won from the first 14 races on the day – and that didn’t even occur until race 10.

Included in the odds-on casualties were both trotting darlings Hannelore Hanover (John Cashman Memorial) and Ariana G in the John Steele Memorial, who tired late at odds of 1-5 to finish fifth. At both offerings odds of 50 cents on the dollar were Courtly Choice and Kissin In The Sand. Courtly Choice couldn’t replicate his performance in the Cane from when last seen in the Meadowlands Pace, while Youaremycandygirl finally got the best of rival Kissin In The Sand by the narrowest of margins in her fourth attempt this year. The unpredictability of it all is what continues to make this day the highest handle day of the year.

Will Phaetosive ever beat Manchego? Maybe not. After playing second fiddle to Manchego all last year, the bettors thought the Hambletonian Oaks would be the time as they made Phaetosive the surprising ever-so-slight favorite off an impressive elimination win. But it was to no avail, and the reigning divisional champion wouldn’t be denied.

Lastly, credit should be given to trainer Chris Choate for his work with Western Joe who beat McWicked in the Sam McKee Memorial. The Western Ideal 4-year-old began his campaign racing in the dead of winter at the Meadowlands and it’s not too often you see those types still standing – let alone winning – a FFA stake on Hambletonian day.

With Hambletonian Day in the books, it closes an unofficial chapter to the first half of the year’s stakes season. From here, it’s always interesting to see which horses move forward and emerge as late season contenders heading into the Breeders Crown. And it starts with this weekend.

Even though Hoosier Park played host to last year’s Breeders Crown, tonight’s Dan Patch Stakes is likely to have a greater worldwide audience than any race in the tracks history. It’s due to the presence and first pari-mutuel start in North America from the New Zealand import Lazarus, hailed by many as the greatest pacer on the planet.

To make things interesting, Lazarus lands the outside post 9 but has still been installed as the 6-5 program favorite. As a matter of coincidence, trainer Jimmy Takter noted online earlier this week that his first start with Always B Miki came too at Hoosier Park, and from the same post 9 (a race he ran 2nd to Wiggle It Jiggleit).

For all of the hype that’s come with Lazarus, every bit of it seemed justified based on his qualifier at the Meadowlands two weeks ago when he won in 1:48:3 over Lather Up. And in a fascinating interview earlier this week with New Zealand media, driver Yannick Gingras gave a preview of what to expect from Lazarus.

There could be some downplaying of expectations knowing that it’ll be the first start here for Lazarus while his other rivals have already have a number of starts under their belt this season, but there’s no question that Lazarus will be out to win. If weather conditions are favorable the race will almost certainly be won in a 1:47-1:48 type of time which for Lazarus shouldn’t be an issue. In that recent qualifier, Gingras has said that he only kept Lazarus up to his task through the stretch but never fully asked him.

His chief rival will be McWicked (2-1), who is just six days removed from a runner-up finish in the Sam McKee Memorial. He maybe have went a bit too quick of a third quarter (:25.4) in that race with the added distance, but overall there was nothing wrong with the performance. Sears travels to Indiana to retain the drive for trainer Casie Coleman and everyone knows by now what a tough horse this one is. For the 7-year-old, a win or a second place would push him over the rare $3 million mark in career earnings.

Bit of a Legend N (12-1) makes a rare attempt on a larger sized track and the small track specialist shouldn’t be discounted. Already a 1:49:4 on the Northfield half mile in June, he should be able to keep pace with these. All Bets Off (10-1) is always iron tough and was a 1:49 winner at this track last year for Burke. Local driver Wrenn picks up the catch drive on the Silva-trained Dealt A Winner (8-1) from the rail.

This year’s edition of the Carl Milstein draws a deeply talented field, as North America Cup champ Lather Up makes his second start back since a break in Hempt final from June.

In his return last week to the races at Scioto, the past performance line for Lather Up (2-1) sums up how difficult of a trip he went. Amazingly, after finally clearing for the first time right past three quarters, he was immediately pressed again to the outside by a horse that had been parking him the entire way up to that point. He was game to fend that equally game rival off, and he showed similar tenacity while inching back in against Lazarus in his Meadowlands qualifier prior to that. Despite having the post position on all but one of his rivals, he’ll be tested yet again.

Jimmy Freight (3-1) has been unbeaten in his last two starts including a 1:48:3 career best in his most recent and now has the fortune of landing the coveted pole position. With an aggressive Louis Roy in tow, he’ll be blasting early to protect early position.

Dorsoduro Hanover (4-1) makes his first start since a wire to wire score in the Adios two weeks ago, and will be an obvious contender once again. His starting spot is outside of all the main contenders, but he’s shown an ability to get into a good early position regardless. Game horse should be heard from before it’s all said and done. Thinkbig Dreambig (12-1) finally lands a half decent starting position and will likely work out a cover trip; bound to go off at a shorter price than his programmed odds. Springsteen (6-1) has been a tough horse to figure this year but is fast when right.