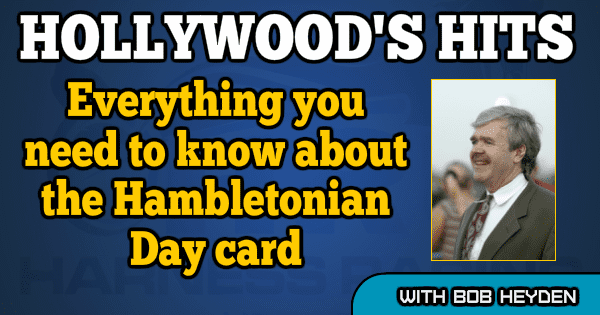 Everything you need to know about the Hambletonian Day card

• Yannick Gingras turns 39 Saturday.
• Joe Bongiorno is one of six drivers under 30 on the card and at 24 he is the youngest driver competing Saturday (Rubber Duck 1st race).
• Saturday’s Hambletonian card has 158 horses scheduled (111 trotters (counting 10 in the Hambletonian) and 47 pacers), 85 of which are trained by a conditioner not born in the U.S., with 41 trained by a Swede.
• Will this be both Jimmy and Johnny Takter’s last Hambletonian? Both are due to retire.
• Jimmy Takter has 23 entrants Saturday (a possible 27 if all four make the Hambletonian final).
• Ron Burke is some $242,000 from becoming history’s first $200 million trainer (as of Aug. 1).
• Marion Marauder at earnings of $2,718,900 is $11,748 ahead of Hannelore Hanover ($2,707,152) as they line up in the Cashman. It will be the richest Triple Crown winner vs. the reigning Horse Of The Year.
• Moni Maker’s son International Moni is racing in there, too. She had the all-time greatest Hambletonian Day record at 5-for-5. She never lost a race on Hambletonian Day, which included a Hambletonian Oaks win in 1995 and three Cashmans (1997-1998-2000).
• Hanover Shoe Farms leads the breeders with 16 Hambletonian Day starters, not counting the Hambletonian final of course. They had 23 and pretty much dominated a year back.
• There are 23 sons or daughters of Muscle Hill on the card. This was his day in 2009 as a racehorse, too with his 1:50.1 Hambletonian record.
• Of the horses racing Saturday at the Meadowlands, the ones with the most wins are: Safe From Terrot (55), Great Vintage (44), Mach It So (44), Obrigado (43), Hannelore Hanover (42).
• There are two Hambletonian winners on the Saturday card — Pinkman and Marion Marauder.
• A driver born outside the U.S. has won the Oaks 22 times in the race’s 47-year history.
• Fillies won the Hambletonian six of the first 12 years, eight of the first 24 and 10 of the first 33, but only three times in the last 59 seasons. (The Oaks began 1971).

Jimmy Takter is gunning for his fifth Hambletonian victory and has four shots to add to the Hambletonians he won in 1997 with Malabar Man, 2010 with Muscle Massive, 2014 with Trixton and
2015 with Pinkman — all with a different driver.

• Atlanta is taking on the boys, trying to become the first female to win this century in the Hambletonian.
• Hannelore Hanover is the lone lady in the Cashman while she continues her defense of her Horse of the Year title.
• The wife and daughters of Sam McKee will be here.
• Paula Wellwood, trainer of Southwind Chrome, will be trying again to win the Hambletonian (Marion Marauder 2016).
• Ariana G could be in yet another starring role. She races in the Steele Memorial.
• Manchego, who will try to give Jimmy Takter his fifth straight Oaks title, will battle Phaetosive and Plunge Blue Chip (the fastest female trotter ever at the Meadowlands).
• Moni Maker has a son in — International Moni in the Cashman.
• JoAnn Looney will race best female older pacer (Shartin N) in the Lady Liberty after years and years of paying her dues and then some. What would say the odds would have been on Jan. 1 that coming into Hambletonian Day Looney would have the #1 earning horse in all of North America (Shartin N, $590,040) and Jimmy Takter would not have any in the top 11?
• Youaremycandygirl, the fastest freshman filly ever, will race in the Shady Daisy.
• Linda Toscano — who is on the ballot for the Hall of Fame and will race Hana Dreamgirl in the Jim Doherty, Helpisontheway in the Dennis Drezin and Repentance in the Frank Zanzuccki — has surged past $50 million officially and is now #10 on the all-time list of trainers.

Three straight reigning horses that went on to be that year’s Horse of the Year have gone down to defeat on Hambletonian Day. In 2015, Wiggle It Jiggleit was fourth in the Cane Pace in the debut of the Cane at the Meadowlands. In 2016, Always B Miki had a tough trip and missed the board while Shambala and Team Zeron got the job done. In 2017, Hannelore Hanover at 20 cents to the dollar in the Steele Memorial was also fourth.

MacDonald returns to the scene

Mark MacDonald has Obrigado in the first race. It was 13 years ago that he, at age 26, drove American Ideal to a new track record at the Big M defeating the eventual HOY Rocknroll Hanover in the process. It was two months later they would team for a new world mark of 1:47.4 for sophomores at the Red Mile.

J L Cruze (1:49.4) say hello to Hannelore Hanover (1:49.2). These two world record setters on the mile track will line up next to each other in the second tier Saturday.

Meanwhile, Plunge Blue Chip has the rail in the Oaks, giving us three sub-1:50 winning trotters on one card this Saturday (1:49.4 in the Del Miller).

Dams of distinction on the card

Can Ake Svanstedt make more history Saturday? In addition to having trained and driven the fastest trotting sophomore of all time, can he become the first ever driver/trainer to win both the Oaks and the Hambletonian in one season? Brian Sears (2009-2013) and George Brennan (2011) have done it driving, and Jan Johnson training (1988 with Armbro Goal and Nans Catch). Jimmy Takter came close in 2014-2015 training both in each season, and drove Trixton in 2014.

Ten of the last 15 winning trainers of the Hambletonian were born outside the U.S. — 4 from Sweden, 4 from Canada, 1 from Norway and 1 from Australia.

Muscles Yankee won the 1998 Hambletonian and was the Horse of the Year runnerup (to Moni Maker). He has 33 representatives on the card thanks to progeny of his sons — 23 by Muscle Hill, 5 by Muscle Massive, 4 by Muscle Mass and 1 by Deweycheatumnhowe.

It was the first of three Triple Crowns for Stanley Dancer and one of seven Horse of the Year titles for Dancer.

Nevele Pride is the only 2-year-old trotter voted Horse of the Year (1967).

Nine were entered in the 1968 Hambletonian, the fewest since 1934 (8) (Ayres also had 9 in when he won the Triple Crown in 1964). Nevele Pride dominated both heats. He was one of four straight Triple Crown winners sired by Stars Pride. Dancer was 41 the year Nevele Pride won the Hambletonian. It was his first driving win.

Second in the 1968 Hambletonian was Keystone Spartan and third was Dart Hanover.