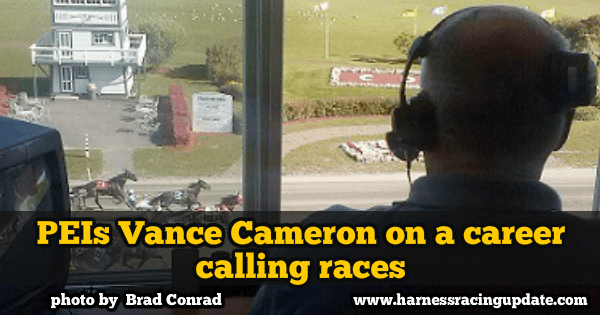 The voice of the famed Gold Cup and Saucer looks back on 40 years at the microphone.

There’s something both exciting and comforting about the voice of Prince Edward Island’s Red Shores announcer Vance Cameron. Exciting, because of his distinctive ability to impart drama into even the most average overnight races. Comforting, because of the warm, familiar sound of his race calls across the decades.

“A long time ago, I did color on hockey for CJRW, a local radio station here in Summerside that used to truck around to the junior and senior games, but it’s always been the race calling for me,” said the 58-year-old. “My first professional call came October 28, 1977. They paid me, so I said, ‘I’m professional now.’”

Cameron got his start at one of Canada’s oldest operational racetracks, Summerside Raceway, in Prince Edward Island. He grew up nearby, in a community and family with a passion for harness racing.

“My grandmother was a wonderful race fan. Her brother had raced horses, as soon as he came home from the war,” he said.

“Back then, you couldn’t get in, unless you were holding on to grandma’s hand or daddy’s hand, but we found spots and holes in the fence,” Cameron said.

The sport’s mystique deepened when Cameron’s father would occasionally bring him along to local watering holes. “These little local house establishments where these gentlemen used to go to have a little spirit,” said the veteran Canadian race caller, chuckling. “For a young fella, it was very interesting to listen to (horsemen) Lester Chappell or George Sobey.” Vance became hooked on harness racing thanks to former track record holder Canu Bay, winner of Summerside’s Invitational Governor’s Plate in 1974, and Summerside announcer Ed Watters.

In 1976, the fledgling announcer got his first break in the business. His mentor Watters was retiring, and Summerside Raceway’s general manager Bob Dewar let Cameron audition for the post. Another PEI opportunity soon beckoned: “After I got into the Summerside gig, Mr. Watters had retired from Charlottetown (Driving Park). So I actually went to Charlottetown in ‘79 to call there, and then I did the calling in 1980.” Cameron said he was caught off guard the following year, when Charlottetown management opted to hire a new race caller.

“They went with (Kevin Gallant), who turned into ‘Boomer’, and I still kept doing Summerside. But one day a week just wasn’t for me. I wanted to call races, and I wanted to call lots of ‘em!”

His reputation attracted an offer from Ontario. “I got a call from Glenn Ledrew from out west. I didn’t know anything about him; he just knew I was a racecaller. He was going to Sudbury Downs, but he couldn’t get there for six weeks; they needed somebody to do the calls, so they flew me up.”

Cameron’s skills were in demand at another Ontario track after the fill-in gig ended. Dale Henderson, president of Sun Parlour Raceway Ltd., was re-opening dormant Leamington Raceway for a two-day meet. “He’d come up to buy a tote board, of all things, from Sudbury Downs. He was talking to the gentleman who ran and owns part of Sudbury Downs, Patrick MacIsaac, whose father had owned it and raced a lot of horses.”

The Island announcer connected with another racetrack manager while at Leamington. Bob Pearson, of Elmira Raceway, offered Cameron the chance to fill in for Ken Middleton Sr., when the latter was unavailable to call Friday night races. The Summerside native also became Kawartha Downs’ summertime Saturday night track announcer, enjoying the positive reception he received in Ontario: “They treated a person so good, it was just unbelievable. I’d just left Prince Edward Island — I didn’t know what the 401 (highway) was.”

Opportunities kept opening up for the distinctive-voiced race caller.

“(Kawartha) was a great gig because then I landed a job in Dresden. So I was down doing Leamington and Dresden, and back then Dresden went four nights a week, all summer long.” When Western Fair Raceway opened in London, Cameron added yet another Ontario harness venue to his growing list of tracks where he has called at least one race. Today, that list encompasses 41 different Canadian tracks, “including fairs and whatnot,” and two in the United States (Toledo’s Raceway Park and Detroit’s Hazel Park.) “I ended up doing lots of race calling!”

Cameron wanted to return to PEI with his young family, so when Summerside Raceway needed an announcer, he offered his services. He was willing to call fewer races so his children could experience the freedom of growing up in his hometown, even if this meant taking a second job outside of the sport. “(In Ontario) you couldn’t let them run wild or loose; down here, it was altogether different,” he said. “My wife and I landed here, and I started working for a construction company.”

One year later, his decision to return to PEI was rewarded. “Didn’t Charlottetown come full circle: The same group who had let me go, back in 1981, was the group that re-hired me in 1997,” he said.

Today, Cameron calls the action from both Summerside and Charlottetown tracks, also training one horse, Southfield Sue. Daughter Brooke paddocks the mare on race days, while son Bryan helps around the barn on an “if-asked” basis.

“At one time, we looked after eight in the shedrow, but that was just ridiculous,” said the licensed trainer. He scaled back after the 2017 passing of his friend and partner in racehorse ownership, Bob Gordon of Elm Grove Farms.

Known as the voice of the Gold Cup and Saucer, Cameron found himself on the international stage to an even greater extent last summer, as he called the 2017 World Driving Championships finals at Red Shores Charlottetown. “I’ll tell you one thing: that floored me, because calling that many horses, and that many strange names… I did a lot of practice going in. Those guys over in France who do 18 or 20 (horses in a race), wow — they’re terrific!”

Cameron’s famous catch-phrase, “Boom! Just like that!”, was originally borrowed from Hippodrome de Montreal’s Dany Emond. But Cameron’s known for more than that crowd-pleasing line. Red Shores’ audiences simply enjoy the unapologetic drama he brings to each race.

While he would love to call the first Gold Cup and Saucer winner that shatters the 1:50 speed barrier at Charlottetown, Cameron said it appeared that the field shaping up for the 2018 edition had not drawn enough high-profile speedsters from outside the region as of press time to accomplish the milestone this year.

Cup Trial eliminations are contested during Old Home Week, starting Aug. 11; the $60,000 final is Aug. 18. Nominations to the FFA pace are due to Red Shores Racetrack and Casino by Monday, Aug. 6.

“I think Gold Cup and Saucer has become international. They come from the States, Ontario. We’ve seen some pretty magnificent animals come to this race in the past 10 years, for sure,” he said. “I mean, you can even go back a little further, to ’98, when Bill Robinson landed here with Native Born and Stout, a couple of millionaire pacers.”

Visitors from around the world converge on Charlottetown every Old Home Week, and Cameron’s satisfaction comes from keeping them entertained, whether calling fields of “bottom claimers” or the coveted Gold Cup and Saucer. “All I want to do is keep on doing what I love to do,” he said. “I love to go to the track, 41 years later. I just love this game.”

And he’s still game to add track #44 to his guest-announcing resume: “I would do it in a heartbeat. I would love to go and meet new people.”