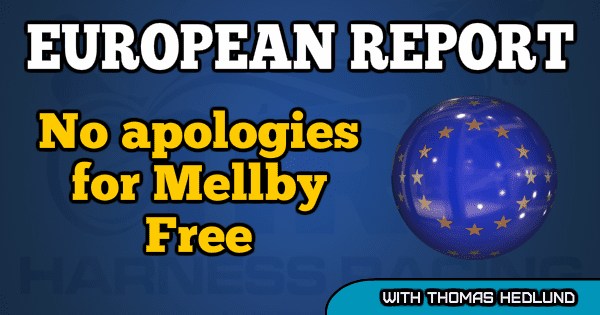 No apologies for Mellby Free

The Stochampionatet for 4-year-old mares is one of the biggest and most prestigious races in Sweden every summer and last Sunday a field of 11 horses chased fame and a purse of $271,000 dollars at Axevalla racetrack.

The big favorite Dibaba finished second in her elimination, which led to a post position in second line, behind horses in the final. Despite that fact, the bettors put their trust in Roger Walmann’s Ready Cash-mare, driven by Örjan Kihlström.

And Kihlström did what he could to give Dibaba the best chance to win the Stochampionatet. Dibaba was sent to position outside the leader Vamp Kronos after 5/8ths of a mile in the 1.7 mile long race.

With a half mile to go, Dibaba made a sudden break and disappeared from the game and with Hevin Boko in bad gait outside of Vamp Kronos in the last turn, everything worked out perfectly for Björn Goop’s Mellby Free (Muscle Hill), who sat in the pocket behind the leader.

Vamp Kronos tried to fight back when Mellby Free attacked with 200 meters to go, but Björn Goop’s horse had best power and won Stochampionatet in mile rate 1:58.1.

”It’s tough to be in these kind of races with just eight starts behind her, but she’s a good horse that has done almost everything right so far. This is all what racing is about. To see all the people and participate in races like this, it feels good,” said Goop, who is well known as one of the world’s greatest drivers. With Mellby Free, Goop collected one of his biggest victories in his training career.

Propulsion (Muscle Hill) has won this race two years in a row and chases the triple, which seems to be a difficult goal to reach since no other trotter has accomplished that feat.