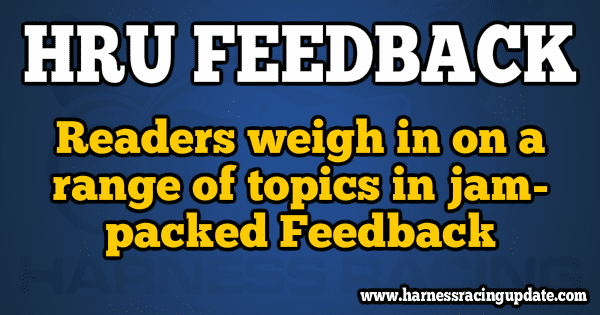 Curmudgeon on beaten times, dinner with The Guru

Just a couple of thoughts:

1. On Brett Sturman’s thoughts on beaten times being included on pedigree pages (full story here), I agree that it’s incomplete and sometimes will be confusing. In my opinion, to be somewhat complete, it should mention the horse’s race finish when achieving that time. For example, a finishing time finishing last is of no consequence, but might be very important if the horse finished second.

Why publishing beaten times is important

I appreciate the opportunity to respond to HRU columnist Brett Sturman’s column “Inclusion of beaten times to pedigrees should be questioned” (full story here).

Brett’s central observation that lesser racehorses may post faster non-winning times when placed in higher level races is likely correct. However, the inclusion of “beaten times” in sales catalogs is not simply for the purpose of soliciting higher prices at public auction.

European buyers face restrictions about which horses are eligible for importation according to racing records. If “best winning times” do not meet the standard, “best beaten times” can be used instead. European buyers have been urging Standardbred Horse Sales Company for years to include such information in our Mixed Sales catalogs, to save them the laborious task of searching for that information for themselves.

Standardbred has been working with the USTA to make that information available, and this year it has become a reality. Since the USTA made the adjustment in their Pathway paradigm for catalog sales pages, that information can easily be made available for all horses.

Our customers are very sophisticated and make the best use of all sales catalog information when making their purchase decisions.

Things looking up in NJ

Sirs: You certainly chose the wrong time to print a letter to the editor guffawing over the anemic prices on races at Yonkers Raceway. We all witnessed Meadowland’s Pace Night at the Big M. There were 9 odds on favorites, 3 second choices, and only 1 longshot winner in 14 total races. Didn’t seem to affect the total handle with all those low priced favorites winning. Instead of being a Debbie Downer, it is much better to appreciate that with the advent of sports betting things are improving for NJ racing.

Recently, there was some questions concerning the finish of The Meadowlands 7th race on June 30. First let me agree with the judges that they got the winner right. In terms of upholding integrity, what I don’t agree with is the lack of displaying the winning photo. Correct me if I’m wrong, but in past years when racing finishes were less than a half length apart the judges would automatically display the photo for those positions, win, place or show thus insuring integrity. Without this type of work product ethic I find it hard to assume judging is on the up and up, given the opportunities, people and money converging. Those naive days are gone forever. You want us to trust you-prove it! Remember the judges are people put into jobs and given authority by other people and ultimately paid for by the public. With multiple judges oversight and multiple camera video viewing there is no excuse for bumbling decisions. And when you do show the photos in question-show the true perspective, that is, include the finish-line pylon in the photo.

On banning Brian Sears and others: As much as I would like to take Mr. Gural’s side on this issue, racing is a business for the drivers and they need to understand that it’s also a business for the track owners but in every business decision there are consequences, Looking at this problem from 50,000 feet, Mr. Gural has been made the heavy but, if the Meadowlands takes funds to support various races for third parties and other organizations, why not put this squarely in their laps, unless the Meadowlands funds these races solely from their own pockets. Thus the problem needs to worked through and appropriate pressure can be applied by those primarily funding the races.

On baby races: Frankly I’ve been disappointed with the racing problems recently with ill-prepared-for-racing 2-year-olds — in particular, the trotters. It is unfair to the public to accept wagers on not-ready-for-primetime 2-year-olds. How about a mandatory requirement of perhaps four qualifiers and add in two start-only qualifiers to insure the trotters are ready to race without breaking. Obviously if we keep doing the same thing and getting the same results nothing will change-SO LETS DO SOMETHING DIFFERENT. And yes I do know that today’s high dollar babies have a limited amount of starts but you can’t get them ready don’t race them

So after reading the July 15 HRU I see that the king of hypocrites has a fan. I am here to take the opposing view from Mr. Mike Miles. So Mr. Miles believes that Brian Sears should have been suspended from driving at the Meadowlands because he only shows up for the big money. Here’s the thing about that, Brian Sears has every right to drive wherever he wants, and to earn a living anyway he sees fit to supports his family. It doesn’t matter how much money you think Brian Sears has made at the Meadowlands, he doesn’t owe anything to Jeff Gural the majority of that money was made before Gural was in charge. Also the Meadowlands only races two nights a week, what’s Brian Sears supposed to do the other five nights a week? Is Jeff Gural going to compensate Brian Sears for the other nights he sitting at home not making any money? I also don’t hear any complaining from the WEG group when the big boys only come in for the NA Cup and other big stakes races at Mohawk, or from the people at Pocono when the big boys only come in for the Sun Stakes weekends and then when they will all be there for the Breeders Crown. The complaining only comes from one person, and I’m sure I’m not the only one who is tired of all the whining and complaining. As for the banning, since we basically live in the same area, how would you like to go to Morton’s and find out that they banned steak from the menu and didn’t give you a reason why? Your boy has done this to trainers and tried to do it to drivers as well. If anyone is owed anything it is us, the gambling public, who put our hard earned money into the Meadowlands product. He wants to ban this one and ban that one, but it’s funny he owns horses with two people who had received positive tests, yet they are not banned but other trainers who have received a positive test are banned, which is hypocrisy. You have a lot of nerve telling Brian Sears to grow up, if anyone needs to grow up it’s the hypocrite running the Meadowlands.

The case of Western Joe – loyalty does it go both ways?

Now fast forward to the William Haughton entries and who is the ae1? No one else than Western Joe! Is this fair to his connections? Of course NOT! They deserved a chance to race in this very rare opportunity for older pacers. Is it fair or being loyal while another barn has four entries in the race and other horses who have not been loyal by racing elsewhere this winter instead of racing at the Meadowlands get the opportunity to race for a nice purse? ABSOLUTELY NOT! It’s not because these horses had more purse winnings this year then Western Joe that they had the opportunity to race in the Haughton, because there were horses racing that had much less in earnings then him this year.

In my opinion, Western Joe’s connections should of had a chance to race, regardless if he would of been 15-1, 30-1, 70-1 or 100-1. They earned their chance to race in this rare opportunity for older pacers by being loyal to the Meadowlands this winter. Just like drivers and trainers have been denied opportunity from racing for not being loyal, then Western Joe should of been allowed to have first preference for being loyal. However they were denied that opportunity and instead watched from the sidelines.
Loyalty is like respect, it goes both ways. Where is the Meadowlands’ loyalty to those that helped support their winter racing?

This past weekend, legalized sports betting opened at the Meadowlands and by all accounts things can only get better for the sport if a equitable sharing of funds between the horsemen, track and state government happens. We here in Ontario have had legalized quasi sports betting with the OLG who is supposed to be our horse racing partner but it is time for the new Ontario government to open up sports betting at the tracks and other venues where you can bet a game without parlaying 3 games to win and offering little to no payout. I think whatever gains horse racing in Ontario has made since the Wynne government cancelled the Slots at Racetracks Program throwing the industry into a shambles will quickly go up in smoke unless we make the move. South of the border the industry was getting to the point where they were ready to turn the lights out until sports betting was given approval by the Supreme Court and if we here in Ontario don’t make the same kind of move we might as well reach for the switch because this ruling in America has shot the first shot over our bow and we must protect our industry.

Sorry, but chemistry matters, and the show is a bore without the ol’ guy’s sense of timing and harness knowledge. Bring Steve and his idiotic sense of humor back before the show is canned again.

Last week I saw a couple of letters asking what happened to Steve Ross. I watched and enjoyed the show for years until it went off the air. I didn’t even know it was back on until I read those letters in Harness Racing Update. Well, I just watched it and I couldn’t believe it was the same show! What I always liked about it, besides watching the races, was the always funny interaction between Steve and Heather. That’s gone. Now, it’s just like every other horse racing show, one race after another, with no real entertainment value.