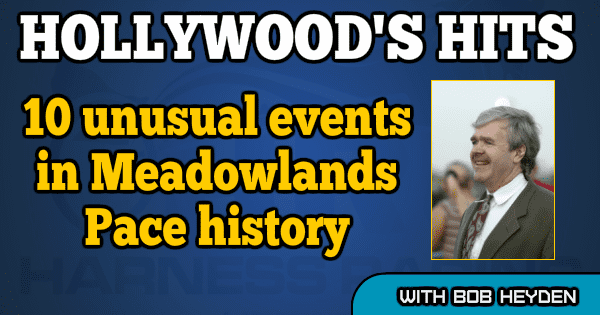 Ten of the most unusual events in Meadowlands Pace history:

1. Pat Crowe appearing in only one Pace, the 1984 edition, finishing 10th with Greener Pastures. This came two years after Cam Fella did not get out of the eliminations, finishing seventh. Cam got his revenge though — Meadowlands Pace-style. He sired four consecutive winners (1991-1994) — Precious Bunny, Carlsbad Cam, Presidential Ball and Cams Card Shark.

2. Wally Hennessey got money in both the 1997 Hambletonian and the Meadowlands Pace. He was second with Take Chances to stablemate Malabar Man in 1997 in the Hambletonian and fifth with Park Place in the Pace that same year.

3. Guts, the 1984 Pace favorite, finished second to On The Road Again with Bill O’Donnell driving the runnerup for Barry Abrams. Six years later, Guts was fifth on the same Meadowlands Pace card won by Beach Towel.

4. Six of the nine drivers in the 1977 Meadowlands Pace did not appear in any other Pace final.

5. The year 1989 was a preview of things to come in the Pace and the Woodrow Wilson. The two most dominant drivers in million-dollar race history — John Campbell and Ron Pierce — finished 1-2 and 2-1 in the $907,000 Wilson with Sam Francisco Ben and In The Pocket, respectively, and again in the Pace with Dexter Nukes and Casino Cowboy, respectively.

6. Jate Lobell was 4-5 in the 1987 Meadowlands Pace and finished seventh after being 10th for much of the first half. It was later discovered he was stuck on the NJ turnpike getting here.

7. Jim Miller and Delvin Miller were the first two Millers on the board in the Meadowlands Pace — 1979 Tijuana Taxi for Jim, then Tyler B was the show horse for Delving in the sport’s first million-dollar event.

8. John Campbell put on a quietly effective show in 2008 and 2009 in the Meadowlands Pace and then the Hambletonian. He was third with longshots in both to the sport’s two biggest superstars. Share The Delight (25-1) was third in 2008 to Art Official and Somebeachsomewhere in the Pace. A year later, he was third with Calchips Brute (59-1) to the two favorites — Muscle Hill and Explosive Matter. Both races were stakes and world 3-year-old records — 1:47 for Art Official and 1:50.1 for Muscle Hill.

Friday (July 13) marked the 10th anniversary of Yannick Gingras driving Foiled Again for the very first time. That moment came in 2008 at Harrah’s Philadelphia. Foiled Again was 5-2 and finished fifth. He won with him on July 28 for the first time (1:50) in a $27,000 race. At that point, Gingras was the eighth different driver for Foiled Again in his career.

The 2018 Meadowlands Pace marked the 23rd anniversary of David and Misty Miller getting married. The day of the 1995 Meadowlands Pace, David was fifth with Cinder Lane Sam from Post 10 in his Pace debut. He was 12.70-1 that night for trainer Max Shaw, and was last at the 3/4 pole. His :26.1 last quarter tied him with Kinney Hanover for the fastest in the field. Five Hall Of Fame drivers were in there (John Campbell 1st, Mike Lachance 2nd, David Miller 5th, Ron Waples 6th and Ron Pierce 7th)