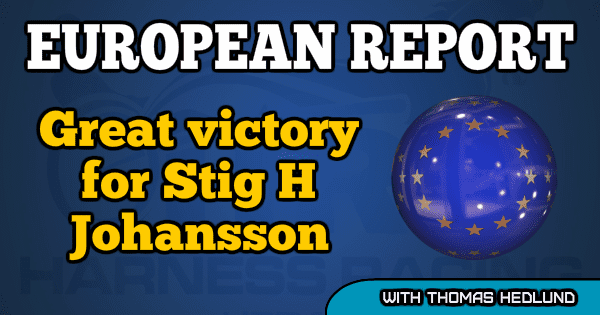 Swedish champion trainer Stig H Johansson, 73, sent his Diamanten (Adrian Chip) to Norway and Ulf Thoresen’s Grand International at Jarlsberg racetrack last Sunday. The trip was successful and Diamanten showed that he has serious thoughts of being in the top game as a 5-year-old.

Diamanten moved from Robert Bergh’s to Stig H Johansson’s stable last fall and lately the son of Adrian Chip has developed a lot, which he proved when he trotted away in front at Jarlsberg.

Erik Adielsson was determined and aimed for the lead at an early stage. From that position, Diamanten never got seriously challenged. He came home in mile rate 1:54.1 over 1.3 miles.

The check for the winner was $99,000 and Diamanten will probably show up in Malmö, in Hugo Åbergs Memorial at Jägersro racetrack in the end of this month.

“Diamanten was very strong and sound today. I was a little bit worried that he should be too lonely in the end of the race, because he can be relaxed and unconcentrated. He is really, really good this horse. He has shown that earlier, but now it seems like he has developed,” said driver Erik Adielsson.

Title defender Twister Bi (Varenne) made a break from the start and was never close to the front horses at the end of the race. Three days afterwards, the owners decided to move the horse from Jerry Riordan’s barn. The new trainer for the International Trot winner is Timo Nurmos, who already has Prix d’Amérique winner Readly Express in his stable.

Calmly and easily for Bold Eagle

Superstar Bold Eagle (Ready Cash) showed off in northern France on Sunday afternoon. In La Capelle, the 7-year-old trotter played with his opponents from the lead and cashed out $52,000 for the victory in the mile race Prix du Thiérache-Centre.

Bold Eagle will continue his summer tour at the countryside in France and Belgium and next stop is scheduled to take place in Belgium, at Mons.

The winning time in La Capelle was 1:54 and Franck Nivard drove the Sébastien Guarato trained horse, as usual.