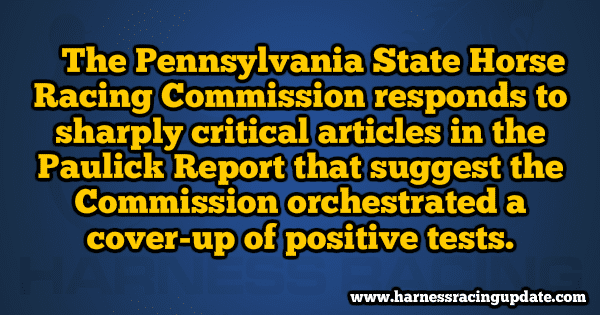 The Pennsylvania State Horse Racing Commission responds to sharply critical articles in the Paulick Report that suggest the Commission orchestrated a cover-up of positive tests.

The article Alan Pincus published June 27 online in the Paulick Report (full story here) is appalling not only for the misunderstanding he demonstrates about Pennsylvania’s equine testing protocols, but also for the inflammatory accusations he levies on good, hardworking public servants based solely on unnamed sources, which should cause any reasonable person to question seriously the credibility of those charges and the true agendas of the accuser.

First, Mr. Pincus suggests erroneously that the Pennsylvania State Horse Racing Commission, in particular Harness Racing Director Brett Revington, knowingly gave preferential treatment to two horses that ran on separate dates at Harrah’s Chester Downs in September 2016. Aside from the fact that Mr. Revington did not hold his position with the commission at the time of the races — a point Mr. Pincus conveniently and briefly mentions as an aside buried within his article — all drug test samples are provided to the lab without information identifying the horse or its owner. Subsequently, results are also provided to the commission without any way to identify the horse from which the sample was drawn. Only after making a disciplinary decision is the identity of the horse and its owner and trainer revealed.

So to be clear, there was no way for Mr. Revington to know when lab results were reported to him that the owner of Woman’s Will was from Ontario. The allegation Mr. Revington was somehow showing favoritism for a horse owned by one of his fellow countrymen is simply conjecture for the sake of stoking conspiracy theories. For Mr. Pincus to suggest anyone may have turned a blind eye to lab test results is not only a mischaracterization and misunderstanding of the process, it is grossly irresponsible and pure fiction for the sake of sensationalism.

Second, Mr. Pincus impugns the character of Commissioner Darryl Breniser. Yes, Mr. Breniser serves on the Pennsylvania Harness Horsemen’s Association board and on the State Horse Racing Commission, but the commonwealth’s law intentionally allows leaders of the state’s equine racing industry to serve on the commission out of a desire to have informed industry experts engaged in the governance process. Prior to 2016’s reforms to Pennsylvania’s racing industry, it was increasingly difficult to find qualified candidates willing to serve on what was then the State Harness Racing Commission. As such, the Pennsylvania General Assembly saw wisdom in allowing representatives of the state’s horsemen and breeders organization to serve — people who care deeply about the future and continued viability of this sport. Further, recognizing there would be those like Mr. Pincus who may try to spin tales of improprieties and conflicts of interest, the General Assembly explicitly banned commissioners from engaging in any ex parte communications about matters that may come before the governing body for consideration. Additionally, commissioners appointed by the Governor — of which Mr. Breniser is one — are subject to strict rules of conduct, the State Ethics Act, as well as financial disclosures designed to bring transparency and accountability to the process.

Again, here we question Mr. Pincus’ motives. His article in the Paulick Report fails to mention that he previously and unsuccessfully shopped another conspiracy theory regarding a horse named Alexis May Hanover, which ran in the first race at Harrah’s on July 28, 2017. That horse is also co-owned by Commissioner Breniser. Mr. Pincus concocted an elaborate claim that concluded a lab result showed the presence of procaine and was also “covered-up.” However, the facts are that all lab test results for that race and day were devoid of any presence of procaine. When this baseless allegation was discredited, Mr. Pincus apparently abandoned it.

The third matter that bears correction regards Mr. Harmon’s employment status with the Horse Racing Commission as a judge at Harrah’s Chester Downs. While commonwealth policy prohibits a public airing of Mr. Harmon’s employment record, what can be said is that he was not fired. At the end of any track’s racing season, commission employees are placed on leave without pay. Mr. Harmon was simply informed that he would not be retained for the 2018 racing season.

Another allegation that bears correcting is the extent to which Mr. Harmon would have been involved in the cases Mr. Pincus cites — namely Moonshine Hanover and Woman’s Will. Mr. Harmon had no role in, nor was he involved in the process of interpreting lab results or determining whether discipline would be imposed in any medication case that arose while he worked for the commission. This is as it should be because a judge is required to hear appeals from discipline assessed. A judge must not be exposed to any of the evidence before an appeal hearing is convened so as not to prejudice the licensee.

Finally, the statement that Mr. Pincus was denied an audience with the Horse Racing Commission regarding these matters is disingenuous at best and, at worst, a blatant misrepresentation of reality. As he notes in his article, Mr. Pincus requested to discuss these matters with the commission in executive session, which is closed to the public. Under Pennsylvania’s Sunshine Act, such matters are not appropriate for a closed-door executive session. Mr. Pincus was offered an opportunity to voice his concerns during the public session later the same day, but he declined, thus, his decision to air these matters in a public forum such as an online industry trade publication raises questions as to his true intent.

Pennsylvania is fortunate to have one of the nation’s most advanced and robust drug testing programs for equine racing. The quality of our results is unparalleled, as is the integrity of the men and women who work in the program and for the State Horse Racing Commission. For purported “evidence” from unnamed sources regarding only one track to be raised in such a sensational way raises serious questions about the true intent of the accusers, as well as the legitimacy of those claims. These accusations merit further inspection, and we at the commission welcome a full and public airing of the facts on these matters, rather than a one- sided characterization by one individual, in this case, Mr. Alan Pincus.