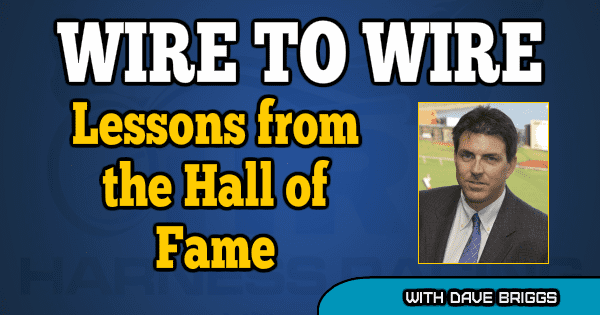 Lessons from the Hall of Fame

On the way to Goshen, NY with my family last weekend we stopped in Cooperstown to check out the National Baseball Hall of Fame. Most of my family are huge baseball fans. I am the convenor of our local house league and two of my three children are both players and umpires. Our visit was partly driven by the fact two former Detroit Tigers — Alan Trammell and Jack Morris — will be inducted this summer.

The Baseball Hall of Fame is often referred to as the gold standard of sports halls, at least in North America (though the hockey one in Toronto is great, too). It is a wonderful museum — located smack dab in the middle of a beautiful little Victorian village nestled between hills and a Otsego Lake — chock full of amazing mementoes that are a testament to the rich history of America’s Pastime.

But as wonderful as the Baseball Hall is, the Harness Racing Museum and Hall of Fame in Goshen is its equal if not its superior, especially if one considers the much smaller scope of the harness racing game compared to baseball.

Simply put, The Harness Racing Museum and Hall of Fame is treasure that more people need to treasure.

I had visited the Harness Museum once before many years ago and loved it then, but seeing it one day after exploring the Baseball Hall really made for an impactful comparison.

The parallels are eerie.

Goshen, like Cooperstown, is a beautiful village still cut from an earlier time. Driving under the lights still strung across a main downtown road you can almost see and hear the old street dances that would close down the town on Hambletonian weekend. Goshen’s rich history of horses is ever-present in the town, just as baseball is ubiquitous in all corners of Cooperstown. Both museums are located in the middle of the town and both showcase their sports in close proximity — the Baseball Hall with Doubleday Field a few blocks away and the Harness Museum with the fetching Goshen Historic Track directly behind it. That members of the Living Hall of Fame actually compete against one another annually in the Hall of Fame Trot on induction day — in front of a full grandstand that cheer the participants with gusto without there being betting — gives the museum a distinct edge over the Baseball Hall.

The exhibits in the Harness Museum — from history lessons to old trophies to numerous videos, compelling photographs and artwork, interactive areas and tributes to the game’s greats — are simply outstanding and need to be preserved, and the museum better attended by our industry.

To be a very small part of something that wonderful as one of the members of the Communicators’ Hall of Fame is an honor as deep as the Mariana Trench and something I will always cherish.

Speaking of the Communicators’ Hall of Fame, the fact it was nearly 100 degrees that day and I was the last one to speak that night meant I basically tossed my speech to try to keep it brief to spare people from the heat. So, forgive me for a few more acknowledgements here, but I would be remiss not to mention a some things I did not get a chance to mention in Goshen.

First, thank you to the United States Harness Writers Association (USHWA) for believing me worthy of induction and to Gerry Connors for first nominating me a few years ago out of the Pennsylvania chapter and for the Canadian chapter supporting me in subsequent years.

I spoke about the importance of family, but I didn’t get a chance to say that I owe a tremendous amount to my parents. They are both academics that instilled a love of language and writing and critical thinking in me. It didn’t hurt that my mother took me around the world and constantly corrected my grammar and my father taught me the value of doing the right thing and that no one person is more important than another.

Apart from the tragic accidental death of my 14-year-old brother when I was 10, I had an incredible, completely normal childhood. I was blessed to grow up how I did and where I did, in Windsor, Ontario just across the river from Detroit with next-door neighbors that instilled in me a great love for the Motor City and its sports teams. I have tried to pass on that love and tradition to my children.

On induction night, I had a chance to express my appreciation for The Canadian Sportsman in my life and all the friends I made there — and am blessed to still have. I am delighted Sportsman owner Gary Foerster made the trip to Goshen to induct me, but I also want to acknowledge the role of Foerster’s partner, Joel Falkenham, and his family in making The Sportsman a great place to work. The Falkenhams are an incredible clan.

I am also tremendously grateful to everyone at Harness Racing Update for the chance to have a second act. I work with some amazing people there — Brian Fuller, Wilma Van Vaerenbergh, Lisa Bihuniak, Lisa Duong and many more.

In my career, I have been blessed to have many mentors, but Foerster, Falkenham, Stan Bergstein, David Reid, John Campbell, Bob Heyden, Ian Fleming and Moira Fanning are chief among them. They have my deep gratitude.

Most of all, I need to salute the fantastic people and horses in the harness racing industry for a great life. The fact that most of the people in this sport are incredibly passionate, hardworking, open and cooperative is not lost on me.

When I started at The Canadian Sportsman in 1995 I was completely new to the sport, had a lot to learn — still do — and wasn’t sure how long I would stay. It didn’t take long to realize it would be foolish to leave.

As I said in my speech, everything with me begins and ends with family. The same year I started at The Sportsman, I also married my amazing and beautiful wife, Laura. As far as my career goes, this wonderful industry is all she has ever known. We have raised three tremendous kids — Moira, Liam and Erin — together in the more than 23 years since, all the while conscious and appreciative of the fact that an industry built on families has been tremendously good to my own.