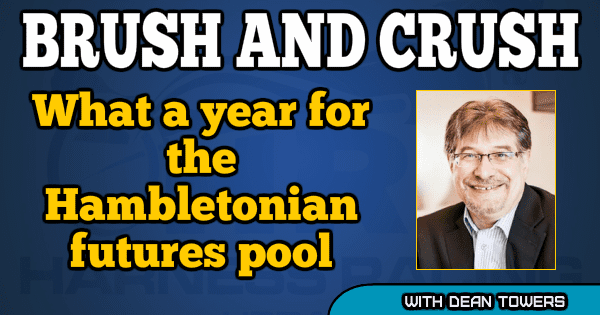 What a year for the Hambletonian Future Pool

With sports betting proliferating in states across the U.S., the general public (if they haven’t noticed before) are getting an education on future pools. These pools, which can include election betting, Stanley Cups, World Series winners, and perhaps the most popular wagers – Super Bowl champions – have been growing just about everywhere.

I’ve always felt the sports leagues benefitted from these wagers, because not only do they encourage column inches in legacy media, they give people a reason to watch an event. After all, if you’re holding a 200-1 ticket on the Las Vegas Knights to win the Cup, you’re probably watching the final.

This year, our very own Hambletonian is no exception. The closing odds for Pool One, stood as follows:

So, tell me, how interesting is this?

The favorite single entry is last year’s champion Fourth Dimension. But, like with all future pools you’re taking a swing – he has not won yet this year. Is he the same horse?

Meanwhile, early season sensation Wolfgang is a well bet 4-1. But, it’s early (surely others will step up won’t they?) and Wolfgang races on Lasix, which for the Hambletonian is not allowed.

Six Pack, at 6-1, seems to be some stock and might be value. He’s undefeated this season and won his Beal elimination on Saturday against some pretty good colts.

Now we have the fillies, which are a part of the pari-mutuel “field” at 2-1.

Atlanta has been nothing short of a sensation. The Chapter Seven filly is 4 for 4 this season with a mark of 1:50.3 (no, that’s not a mistype) and I don’t think there’s been more buzz for a three-year-old trotting filly since the anticipation for Snow White or Mission Brief. She’s outstanding.

Not far behind her – if at all — is Jim Takter’s superstar filly Manchego. The daughter of Muscle Hill made it three-for-three for ‘18 on Saturday evening in her Beal Elimination at Pocono. It was her 15th win in 15 starts.

The final part of this three-headed filly monster is Phaetosive. She’s proven to be in the same league with the top two and has come back very strong at three. In her debut at the Meadowlands she raced the boys and closed from last at the half to be third, with a last quarter of :26 (once again, that’s not a mistype). A scratch out of the Pennsylvania Sires Stakes on June 12 is hopefully just a minor set back for the daughter of Explosive Matter.

You might be saying, “2-1 on those three fillies, plus any other horse is a steal”, and you may be right. But adding to the interest of this year’s Hambletonian future pool is the simple fact that there is no guarantee any or all of these fillies even enter the main event. At the present time, none of the connections have said much about it.

It’d be interesting to see if all three signalled they were Hambletonian bound for the game theory in play. If only one of them land in the Oaks they’ll probably be assured of being the 1-5 or 1-9 choice. It’s probably smart to place the cards close to the vest.

Usually about this time of the year we seem to be most interested and enthralled with the colt pacers, and make no mistake, I think Lather Up is wonderful. But the trotting ranks and the Hambletonian seem to me to be where the real puzzle lies. And for punters, this year we can wager our opinion in a future pool. Fun times indeed.