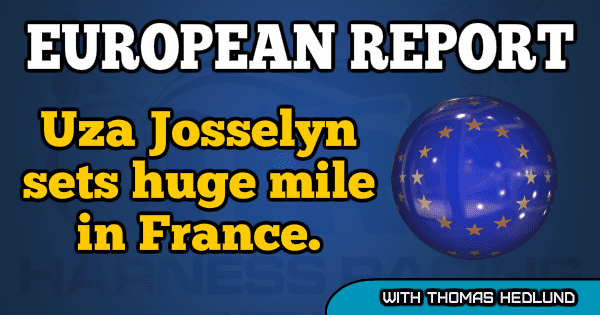 Uza Josselyn (Love You) set a new European record when she won the $140,000 Prix de Washington over the mile at Enghien racetrack in Paris on Saturday afternoon.

The Rene Aebischer trained mare found the lead at an early stage of the race, but had to let Un Mec d’Heripre catch the front position after a half mile. In the last turn, Uza Josselyn was first over and with 150 meters to go, she had beaten the leader and sprinted away to comfort victory in 1:50.3, which is the fastest time for an European bred mare on the continent.

The first big races for the 3-year-olds in Sweden were held at Färjestad racetrack on Saturday afternoon. E3 is a series of races that has been alive since 1997 and many top trotters have begun their careers in the prestigious race.

The 3-year-old mares fought for a $230,000 purse and when two of the favorites early disappeared by galopping, leading Flash Am looked to be the winner for driver Örjan Kihlström and trainer Roger Walmann. But from third over Joakim Lövgren put the gear in Zara Kronos with a little less than a half mile to go in the 1.3 miles long race and the good pace in front cost Flash Am.

Zara Kronos, now with five victories out of eight attempts won in mile rate 1:57 and trainer/driver Joakim Lövgren was touched by the moment after the race.

”I’m so happy for the caretaker Jonas’ sake. I recognize myself in him. Jonas came to my stable last winter, without a driver’s license and made it to the stable every morning with his bike even if there was snow on the ground. He reminds me of myself, when I was young in the game. Zara Kronos is a horse that I got as a yearling and I’m happy that she has developed in right direction after a good season as a 2-year-old,” said Joakim Lövgren.

In $230,000 E3 for colts and geldings Svante Båth (who else?) had three trotters in favorite position and driver Erik Adielsson picked Attraversiamo (Kiss Francais) for his drive.

Adielsson made the winning move mid race when he sent Attraversiamo to position outside of the leader, stablemate Global Withdrawl from where Attraversiamo showed that he, undoubtedly, was the best horse in the field. The son of Kiss Francais won in mile rate 1:56 over 1.3 miles.

The king of E3, Svante Båth, took the opportunity to grab his 2,000th training victory when Attraversiamo won at Färjestad.

”They all three ended up in great positions and I was satisfied. Attraversiamo is a talented horse that has done most everything right so far. Two thousand victories? Have you counted how many races I’ve lost?” Båth said with a laugh after his 12th victory in E3.

Båth can look back at an outstanding career as trainer. Beside the 12 E3 victories he can, among other big races, put Kriteriet (twice), Swedish Derby (twice), Breeders Crown (4 times) and Stochampionatet in the bucket of prestigious wins.

2017, Svante Båth won three out of a total of four E3 finals in Sweden. The next round of E3, over a mile, is scheduled in August and we have a feeling that Båth will come back with new attempts in chase for win number 13 in the series.

Daniel Redén-trained Heavy Sound impressed the spectators at Färjestad when he from position first over beat leader (and heavy favorite) Cyber Lane in Färjestads Jubileumslopp ($90,000).

Driver Kenneth Haugstad left his position third over in mid race with Heavy Sound and during the remaining 3/4th of a mile, the 6-year-old son of Ken Warkentin had to do it the hard way outside the Swedish Derby winner from 2017.

Heavy Sound got advantage in the last turn and had power enough to hold stable mate and rapid finishing Sorbet behind with a nose.

”This horse is just incredible. He was just two lengths behind Readly Express in the Derby two years ago and today he was as good as in Gävle in May”, said Kenneth Haugstad after the victory where Heavy Sound made the mark 1:54.2 as mile rate over 1.3 miles.

Daniel Redén could also see his American bred Don’t Mind Me (Andover Hall) sprint home from the lead in Silverdivisionen final ($67.000) in mile rate 1:55 over 1.3 miles for Örjan Kihlström.

The Gran Premio Tino Triossi ($180,000) was held in Rome on Friday night and Alessandro Gocciadoro trained Vitruvio (Adrian Chip) again showed that he is the best trotter among the 4-year-olds in Italy.

Vitruvio got the lead with 5/8ts of a mile to go and was more or less outstanding in the home stretch. 1:57 (mile rate) over 1.3 miles was the winning time for Gocciadoro’s trotter.