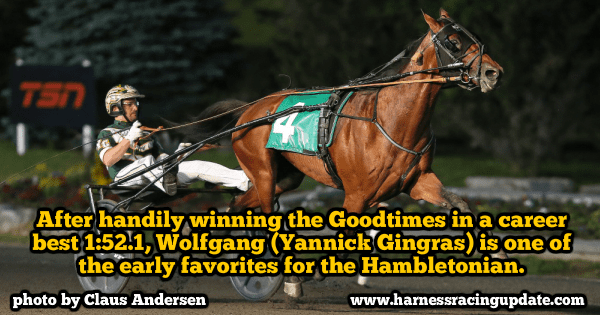 Whipping up something delicious:  The compelling origin story of Wolfgang

The Goodtimes champ and one of the early favorites for the Hambletonian has come from modest, interesting beginnings to delight his breeders and part-owners Art Zubrod and Leah Cheverie who never gave up faith that their lone mare, Summer Savory, could produce a champion.

By the time Wolfgang arrived the day before St. Patrick’s Day in 2015, Art Zubrod admits he had almost given up hope that the lone mare he and his wife, Leah Cheverie, own privately would produce a champion — except Cheverie was having none of his pessimism on the matter.

Wolfgang, named for famed chef Wolfgang Puck, only improved from there and is now one of the favorites for the $1 million Hambletonian set for Aug. 4 at the Meadowlands Racetrack in New Jersey. Saturday, with Yannick Gingras in the bike for trainer Jimmy Takter, Wolfgang scored a dominant four-length, 1:52.1 victory in the $202,160 final of the Goodtimes at Woodbine Mohawk Park.

Takter? Gingras? Hambletonian favorite? On the surface, it sounds like just another year and just another great horse pointed toward trotting’s ultimate prize.

Except Wolfgang’s origin story is not one of another blue-blooded trotting phenom.

Wolfgang is the son of the underappreciated young Ohio-based stallion My MVP out of the Brittany owned Mr Vic—Mixed Spice mare, Summer Savory. Brittany sold Summer Savory for $3,000 as a yearling to Leith Waite of Prince Edward Island. She earned just $2,130 at the races. It was on one of their visits to PEI — Cheverie’s home province — in the summer of 2005 that Cheverie and Zubrod saw Summer Savory race and decided right then and there they needed to buy her back as a broodmare.

“She just had a great gait. We were both impressed with her desire. She was on a half-mile track and Leith’s brother is probably 6’4” and 250 pounds, if not more. He just set her on the outside and let her grind it out. You could tell that the week before that’s what she had done. She did the exact same thing the next week. I was impressed with her. She looked like a mare to me that could become an open type mare. Maybe not the highest level, but make some money. So, we took a shot at her,” Zubrod said.

When Summer Savory’s racing career didn’t work out under a new trainer, Zubrod did, in fact, breed the mare to Cantab Hall. The first foal aborted, but the second was a Cantab Hall colt Zubrod named Can’t Waite in honor of Leith Waite.

“A real leggy horse, very willing, a great attitude. If he wasn’t the best yearling, he certainly was second best,” Zubrod said.

But before Can’t Wait got to the ring, he took a tragic step in the paddock while his yearling video was being shot.

“He came out of the turn on the video and reached up extra long to take a big stride and it sounded like a shotgun went off in the paddock that day. He snapped the right front leg,” Zubrod said.

Summer Savory was then bred twice to Master Glide without success — though those two males trotters, named Batali and Chiarello, respectively, started the tradition of naming Summer Savory’s foals after famous chefs.

“I bred to (Master Glide) and it was my fault. I don’t know why I thought we could have the first and only Yankee Glide that became a stallion. You make some mistakes. The odds were against us, that’s for sure,” Zubrod said.

For Summer Savory’s next foal, Zubrod went back to Cantab Hall and had a colt, later gelded, named Chef Lee that earned over
$300,000.

“The horse could trot a lot, he just wasn’t the best of individuals. He was a bit tough on his groom and tough on himself. But he made some $300,000. There are worse things in the world,” Zubrod said.

Then Zubrod made the decision to breed Summer Savory to My MVP, who stands at Sugar Valley Farm in Delaware, OH.

“If you look at his numbers, he is a pretty darn good sire. He wasn’t bred to that many high-end mares, and he certainly wasn’t bred to any numbers and he’s done well. He’s had several sires stakes winners and I see he’s got some 2-year-olds that are winning right now,” Zubrod said.

Zubrod said Wolfgang had a presence in the paddock and the shedrow, even as a baby.

“He commanded respect from the other yearlings, but he didn’t demand it. In other words, he didn’t beat them up to get it. He naturally had it. When he walked in the shed, they were aware that he was in there,” Zubrod said. “It’s a trait that I like seeing in a yearling. Horses that fight a lot I don’t like at all. They’re not interested in racing. When they get beat, they don’t want to race anymore. That’s it for them.”

Takter and his main yearling inspection expert, Perry Soderberg, both liked Wolfgang, too.

“I was pretty sure Takter was going to get him,” Zubrod said. “He stands behind me, basically, at the (Fasig-Tipton sales) ring all the time. He wasn’t there on the night this horse sold. Per Engblom, the big guy that’s Takter’s second trainer bought the horse.”

“I knew he was going to the Takter stable,” Zubrod said. “I walked out to the walking ring and called Perry (Soderberg) immediately and I said, ‘Are you with Jimmy?’ He said, ‘Yeah.’ I said, ‘I’d love to have a piece of that horse.’ The future owners were at the table eating dinner with Jimmy and they said, ‘We’d love to have you in because it tells us what you think of that horse.’ So, I got a quarter of that horse that night and the rest is history.”

“He is a very mature animal,” Zubrod said of Wolfgang. “You can see it in the winner’s circle. A lot of horses don’t even want to stand there and he comes in and he’s just as happy as can be to stand there and let people look at him and talk about him.”

Fair Island, which has produced other notable horses, the most famous likely being 2002 Canadian Horse of the Year Real Desire, also share ownership in Summer Savory’s 2-year-old Swan For All-sired colt Bayless and will retain the full-sister to Wolfgang, a yearling filly named Julia C.

“She does all the naming… I give her 100 per cent of the credit for that,” Zubrod said. “We would have started (the chef names) with the first (foal), but I did want to name the first one after Leith Waite, somehow. I liked the name Can’t Waite using his last name as Waite, but after that one died I didn’t feel like continuing that. All the rest are chefs. Bayless is Rick Bayless of Chicago fame. Wolfgang Puck and there’s a Bourdain after Anthony Bourdain. Chef Lee is Ed Lee who had a New York restaurant of fame and then moved to Louisville and had a couple or three restaurants there and now is in a D.C. restaurant. He’s pretty good with Korean / U.S. fusion or American fusion. Chiarello is out of California. He cooks in Napa Valley. He’s got a couple of high-end restaurants in Napa. Then Mario Batali and Julia C is Julia Child.”
Zubrod said Summer Savory did not get in foal last year, but is currently carrying a Father Patrick foal.
“We’re kind of excited about that one, too. You never think you would have a second champion, but you’re not going to give up,” Zubrod said.
For now, most of his and Cheverie’s focus is on Wolfgang.

“I’m enjoying it. Leah takes it so seriously it’s like her fourth grandchild. She’s so invested in this horse,” Zubrod said.

Truth is, Zubrod is dreaming a little about the possibilities and sounds deeply proud of the colt’s accomplishments to date, particularly given the perseverance and the couple’s long-held belief that its modest mare had the grit and ability to produce a top trotter.

“If this had been one of her first couple of Cantabs I wouldn’t have been surprised,” Zubrod said, “but by the time this horse came along, I wouldn’t say I had given up hope, but…”

His voice trails off for a second as he ponders the improbability of it all.

“I can’t tell you why this horse has turned out the way he has. It’s certainly not surprising once I saw his development, but it was surprising in utero or as he was born. If when he was born somebody had said, ‘He’s going to be one of the top 3-year-olds in the country, I would have said, ‘I don’t know about that,’ but once I saw him as a yearling in the barn and out in the paddock, this does not surprise me at all.”