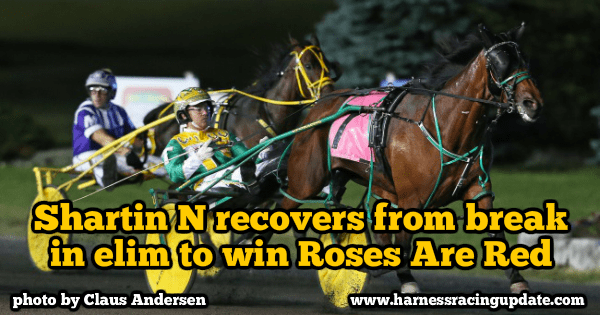 Shartin N made her connections sweat last weekend, breaking stride heading into the first turn of the Roses Are Red elimination. Luckily, she recovered to finish fourth and advanced to Saturday’s $370,000 final for pacing fillies and mares at Woodbine Mohawk Park.

Last Saturday’s break wasn’t the first time this season Shartin N has had a miscue in an elimination. Back in the Blue Chip Matchmaker series at Yonkers in April, Shartin N broke stride twice in the final preliminary leg, but came back to win the final the next week. This time around, the result was identical. Shartin N was aggressive from the break in the Roses Are Red Final, and she was able to hold off Blue Moon Stride in the stretch.

“Well, she’s done that before and, I’ve got to tell you, I was nervous,” said Jo-Ann Looney, who owns Shartin N in partnership with Richard Poillucci. “I was really nervous. I could barely watch the start. That goes with me and that goes with her.”

Shartin N broke cleanly in the Roses Are Red Final, and immediately put pressure on Blazin Britches heading into the first turn through a quick opening quarter of :25.4. Shartin N went on to take the lead from Blazin Britches on the backstretch and was able to catch a breather, slowing down the pace to cover the first half in :54.2.

Heading into the stretch, Blue Moon Stride gave chase from the first over position, but Shartin N would not be denied, as she went on to cross the line in 1:49.3 for the mile with Tim Tetrick driving for winning trainer Jimmy King, Jr.

“I let her tell me what she wanted to do off the gate, which I’ve always done,” Tetrick said. “Today I did let her step forward pretty good to get an early position. It worked out where I was going to make my way to the front and I went ahead and did that.”

Tetrick said last weekend’s break in the elimination came down a difference in tactics between horse and driver.

“She didn’t want to listen to my audible,” he said. “She’s a good mare. She’s got her quirks, but with as much speed as she has, she gets to overcome a lot of that.”

With the victory in the Roses Are Red Final, the five-year-old mare has now won 11 of her 14 starts this season, and has crossed the $500,000 mark in seasonal earnings. Looney said it was possible Shartin N would point to the $200,000 Golden Girls Stakes at the Meadowlands in July.

“I think she’ll get a week or so off,” she said. “I have to look at my schedule and see what’s next. I think there’s something at the Meadowlands next, but she’s had a lot of starts already so we’ll give her a little time out in the field and in the stall. She’ll rest and she’s good.”

Bred in New Zealand by G. J. Crabbe, Shartin N was purchased by Poillucci and brought to North America to race.

“It’s just been great,” Looney said. “Rich Poillucci bought her in New Zealand and he was kind enough to offer us a piece of her and I’m very grateful to him for letting us be a part of this. It’s a dream come true for me. I watched Anndrovette win all those races years ago and I thought, ‘Ooooh, would I like to have something like that?’ And I got that. It’s a great thing.”

The Roses Are Red series was Shartin N’s first appearance at Woodbine Mohawk Park, but Looney said Shartin N is likely to return in September for the $225,000 Milton Stakes.

“It’s just been so great and everyone is so nice up here,” she said. “We’ll be back for the one in September.”