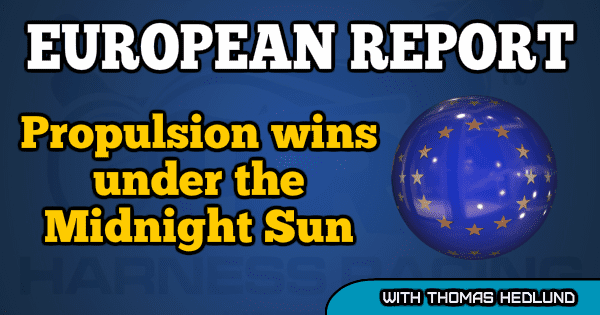 Propulsion wins under the Midnight Sun

Muscle Hill son Propulsion won the $205,000 Norrbottens Stora Pris in Boden, northern Sweden, for the third year in a row on Saturday night.

Norrbottens Stora Pris is one of the most spectacular events in the Swedish summer meeting. It’s a race for the elite late in the evening as the sun still shows up on the summer sky and this year, the sun really shined on the field of nine horses that was gathered behind the gate in the 1.3-mile race.

Sweden Cup winner Arazi Boko from Italy opened quickly for the lead with Nadal Broline easily parked outside. The pace was extremely slow for this kind of race. When the field headed for the first 5/8 of a mile, Arazi Boko came there in mile rate 2:00.

At that point, Örjan Kihlström had begun his attack from fifth over with heavy favorite Propulsion, but Ulf Ohlsson behind Nadal Broline had no thoughts of making the last lap an easy one for Propulsion and with 5/8ths of a mile to go, Nadal Broline was the new leader of the race.

From position outside of Nadal Broline, 7-year-old Propulsion got advantage of Norrbottens Stora Pris already in the last turn, but behind him, 5-year-old Makethemark followed and that horse can really finish strongly in the home stretch. Which he did this time as well.

Makethemark challenged Propulsion seriously with 200 meters to go, but the Daniel Redén trained Muscle Hill son once again showed his power in the home stretch and won in mile rate 1:54,4 over 1.3 miles.

“What can I say about this horse? He is just so strong every time and today we needed a little bit of luck from the post position behind other horses. And we had no luck, but with a horse like Propulsion, everything works anyway,” said driver Örjan Kihlström.

“After 500 meters I thought that the race was over for Propulsion,” Redén said. “With Nadal Broline in front it’s hard to believe that you can win the race when you are so many lengths behind, but Propulsion is tough to beat, even when he’s on the outside and I can’t describe the feeling of winning this race for the third time in a row. I love the atmosphere, the track and the fans that come to this event every year. It’s really something special to win here.”

No drama for Aubrion du Gers in Finland

French trainer Jean-Michel Bazire sent his top trotter Aubrion du Gers (Memphis du Rib) to Kymi Grand Prix ($197.000) in Kouvola, Finland for the Saturday race card and the 8-year-old gelding had no problems by winning this year’s edition of the 1.3-mile race.

Jos Verbeeck got the chance to steer the French bred gelding in Finland and the duo early found the lead, from where Aubrion du Gers easily sprinted home in mile rate 1:57.4.

Elitloppet winner Ringostarr Treb was scratched in the race and Aubrion du Gers thereby became the bettors’ choice for the victory.