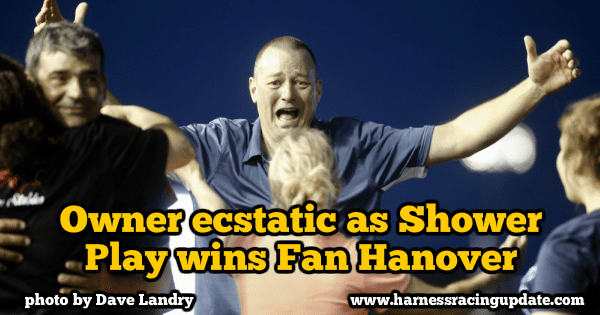 The Quebec-based owner leapt over the winner’s circle fence and kissed the Woodbine Mohawk Park track twice in celebration as the filly he owns with trainer Rene Dion and Susie Kerwood won the $415,000 event with Louis Philippe Roy in the bike.

While Shower Play was light on racing experience heading into Saturday’s $415,000 Fan Hanover Stakes Final for three-year-old pacing fillies at Woodbine Mohawk Park, she showed she has plenty of talent, closing widest of all to defeat Kissin In The Sand in deep stretch in her eighth career start.

Shower Play’s late kick was on display in last week’s elimination, and she delivered again in the final. She sat seventh in the early going, tracking the favored Kissin In The Sand who was in sixth, as Ubettergo Go did go to the front by gunning to the early lead from the outside.

Kissin In The Sand appeared to take the lead in mid-stretch, but Shower Play out sprinted all of her rivals on the far outside in the final strides to win in 1:50.2 with driver Louis Philippe Roy in the bike.

Martin Leveillee, who owns Shower Play with trainer Rene Dion and Susanne Kerwood, was overjoyed with the victory, so much so that he leapt into the winner’s circle and kissed the Woodbine Mohawk Park track twice during the post-race presentations.

“I’ve been dreaming about that for 30 years, since I went to the races when I was 10,” he said. “Here I am. None of my horses were good, but this one is amazing. It’s beyond my dreams, beyond my dreams. I dreamed of having a good horse in a good race, like a Sires Stake, but I told them, ‘As long as she’s in the stretch and she’s beside the other ones, even if she doesn’t win, she’ll be there.’ And then she passed the good ones.”

Shower Play was a $15,000 yearling purchase. Leveillee said he had only previously owned trotters before Shower Play, but friends had told him to speak with Dion about buying into some yearlings after the 2016 sale.

“I’ve been owning horses for 15 years, since 2003,” he said. “Always fillies, always trotters, none of them, unfortunately, were very good. In my budget, the only one that worked was a pacer. I had never had a pacer before.”

Shower Play made five starts as a two-year-old in 2017, mainly racing on the Ontario Sires Stakes Grassroots circuit. She recorded three wins and a pair of runner-up finishes from those five starts, highlighted by a 10-length victory at Woodbine Mohawk Park on Sept. 1. She was scratched sick from a start on Sept. 18, and the connections opted to stop on her for the rest of the year.

“We trained her, last year she did good, but she got sick, so we missed the last races,” Leveillee said. “I said, ‘Don’t worry, she’ll come back.’”

Shower Play did come back, but it was maybe a little bit of a longer wait than the connections had initially anticipated. Poor winter weather in Quebec would delay her training, and she returned to the track on May 25 for a qualifier at Woodbine Mohawk Park, qualifying with a time of 1:56.2. She made one start in another Ontario Sire Stakes event on May 31, winning that race by three-quarters of a length before proceeding on to the Fan Hanover elimination.

“We did not have an extra race to see if she was at that calibre,” Leveillee said. “(Dion) called and asked what I thought and I said, ‘I’ll follow you. She paid for it.’”

That faith certainly has paid off. Shower Play closed from well back in the elimination, finishing in a dead-heat for second behind Kissin In The Sand. On Saturday night, she turned the tables on the favorite, much to the delight of her connections.

“She finished second last week, so we know she was within striking distance to make it,” Leveillee said. “We were able to get a third-over trip from the best horse – and here I am.”