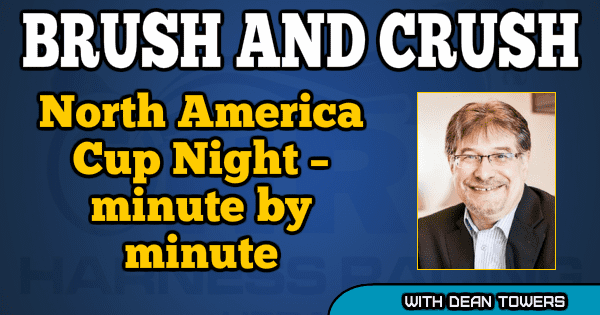 There are very few nights in harness racing where the atmosphere is electric from the first race to the last event of the evening. And North America Cup night is one of them. I, like I do every year, watched and wagered. Please allow me to share a few thoughts, minute by minute.

6:34 p.m. – The first race of the night springs off the gate, and it was a barnburner. Do you ever notice on big nights that hardball happens more often than not? Bettors pushed through almost $100,000 through the early Pick 5.

7:17 p.m. – I wrote a column awhile ago here at HRU, where I suggested that tracks bar some big favorites to encourage better wagering stakes races. I think we could rename that the “Hannelore Hanover ask.” She’s quite simply the best, and no one else (right now, anyway) is even in her zip code. Congrats to the connections for keeping her so good for so long. Bravo!

8:02 p.m. – I really like the fact WEG offers a consolation for pacers who did not make the Cup final; and in this case, it was especially welcome. Trainer Blake MacIntosh had a terribly unlucky last weekend with several of his charges encountering bad racing luck. Courtly Choice walking away with a nice pay check in a sparkling 1:49.2 no doubt took some of the sting out of that tough luck. Keep your eye on that colt. He’s got a ton of go, and in my view, when he figures this game out he’s going to be scary good.

8:22 p.m. – The Mohawk Gold Cup had a local horse – and maybe more apt, local driver – take home all the chocolates, with Sintra defeating 2-5 chalk McWicked. Kudos to Jody Jamieson for recognizing the lack of leavers, zooming into the four hole, and mapping out a perfect second over trip. The 1:48 clocking told us the track was fast.

9:27 p.m. – In arguably the most interesting betting race of the evening, Shower Play moved off cover and mowed down last week’s elimination winner Kissin in the Sand. Shower Play has always been a very nice filly and it’s nice to see the connections be rewarded with a huge payday. This kicked off a sizeable pick 4 pool of a shade over $137,000.

9:51 p.m. – The Goodtimes often signals who’s who in the trotting division, but in this case, I’m not too sure. Alarm Detector was driven like he wasn’t going to be very good, early season fast class winner Hat Trick Habit broke in the two hole, and Midwest invader Fiftydollarbill busted while making a nice wide move. The only thing we can say for sure is that Wolfgang seems to be on his game. That was a nice effort and he’s come back at three much better than he was at two.

10:00 p.m. – National television coverage starts on “TSN2”, Canada’s ESPN. The Woodbine TV team, along with TSN, present a top-notch TV product. The features on Stay Hungry and Lather Up were excellent. A plus.

10:15 p.m. – Shartin gets the job done in 1:49.3 in the Fan Hanover and I thought it was a huge effort. The front-end was perhaps not the perfect place to be tonight and the :25.4 first quarter surely took some sting out of the talented mare. Mark Harder and Corey Callahan’s Blue Moon Stride was a gutsy second. She’s become a rock-solid racemare.

10:49 p.m. – If we don’t believe in Lather Up now, I’m not sure we ever will. Montrell Teague is one of the bright young drivers in this game and he engineered a beautiful trip for the handy little colt. That was a super effort. The betting pools were pretty healthy for the big race, with $144,000 in the win pool alone. Lather Up kicked off a late Pick 4 of $72,015.

WEG’s pomp, pageantry and their showcasing of the event was second to none. In fact, winning owner Gary IIes touched on that in the television interview.

I’d be remiss not to mention Lost In Time. It’s no secret he’s had some steering issues and has not found his feet yet this season, but that third place finish from off the pace was sparkling. I’d wager he’s turned a corner.

Midnight – A long day got a little longer because not only was the evening a good night for fans of the sport, bettors had their due as well. The $176,000 super high five carryover was a mandatory payout. WEG again assembled a huge field with several possible winners. The pool size was less than expected (too long a day, too late at night or are people growing weary of the larger carryovers?) but still generated over $414,000.