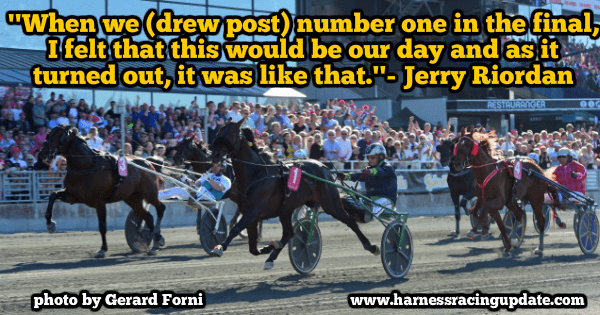 ”When we (drew post) number one in the final, I felt that this would be our day and as it turned out, it was like that.”

That was U.S. born trainer Jerry Riordan’s words after the final of Elitloppet at Solvalla on Sunday afternoon. His Ringostarr Treb won the elimination and final in the prestigious mile race and there is no doubt that Riordan possesses at least two of the best trotters in the world at the moment. His Twister Bi (Varenne) won The International Trot at Yonkers last year and Ringostarr Treb showed enormous capacity several times during 2017 before Riordan tried the Italian-bred trotter in Paris last winter. In France, Ringostarr Treb raced well but was never really one of the top horses that people talked about before Prix d’Amérique and Prix de France.

The 8-year-old son of Classic Photo out of Farsalo Egral got his invitation for the Elitlopp after a splendid performance in Olympiatravet at Åby, Sweden in April and in the Elitloppet he showed that he is still in the best shape.

Ringostarr Treb’s driver Wim Paal quickly understood that he could recapture the front position and with Propulsion first over, the first kilometer was unusually slow for an elimination in the Elitlopp.

The home stretch became a pretty easy thing for Riordan’s horse, who won with a neck ahead of Propulsion in 1:54.

Ringostarr Treb, Propulsion, Nadal Broline and Pastore Bob all made it to the final from that heat, which was the second on the racing card at Solvalla.

In the first elimination, the heavy favorite Bold Eagle got his chances more or less spoiled due to an embarrassing decision from the judges at Solvalla. The rules are clear when a horse starts behind the gate. With 30 seconds to post time, all horses must be behind the gate and with 100 meters to start, all of them should be well connected. Australian horse Maori Time’s driver Todd McCarthy was a little bit late before the race went off and the judges decided to make a recall. The recall made several horses stressed and Dreamoko (Björn Goop) made a break and couldn’t find the right gait in the second attempt. When Goop got Dreamoko to trot, he tried to get the horse behind the car, but the judges didn’t like the way he approached the gate and late they pushed the button for another recall.

Normally, with a recall behind the gate, the car should continue to roll with the gate as usual, so the horses can relax and calm down before the next starting attempt, but in this case, in an elimination for the Elitlopp, someone made a bad decision and accelerated with the car, whereon three horses (Bold Eagle, Rajesh Face and Maori Time) sprinted away as if the race was rolling.

”This was the judges decision to make and I just can say that it was unlucky with everything that happened before this specific race. We had the thing with Maori Time, who was late behind the gate, Dreamoko, who made a break and lost many lengths before Björn Goop chased to try to reach his position and then Up And Quick got problems with the equipment,” said Solvalla’s chief of sport, Anders Malmrot.

Up And Quick was soon back on track, but by time Bold Eagle was so stressed that he in the next attempt to start the race turned around and ran home towards the stable area for driver Franck Nivard.

Stefan Melander, who drove his Volstead in this elimination, was disappointed after the race.

“I was on the track for nearly 30 minutes with my horse. In the first attempt, Volstead was perfect in my hands, but when the race got off, I had nothing there. He was empty and the race was over for us,” said Melander.

The race eventually started and Bold Eagle couldn’t handle the situation and disappeared by making a break after 100 meters. Maori Time did the same thing when the car left the field of eight horses.

Dreamoko took the lead with Norwegian-bred Lionel (Look de Star) on the outside. Lionel was maybe one of the horses that managed to control the stressed situation before the race best. Driver and owner Göran Antonsen put some pressure on the leader in the last turn and the 8-year-old Lionel easily won the heat in 1:52.1.
Dreamoko, Up And Quick and Takethem all made it to the final, which, by many, seemed to be a fight between Ringostarr Treb and Propulsion.

But Ringostarr Treb was at his best this day and Propulsion never got really close to the Riordan-trained trotter. A trip behind leader Pastore Bob and outside of him during the race’s last 600 meter became the winning trip for Ringostarr Treb and when driver Paal got command of the race with the home stretch to go, his chasers had too many lengths to go ahead of the new leader.

The victory for Ringostarr Treb in 1:51 was well deserved for the horse who likes to race at Solvalla.

In 2015, Ringostarr Treb won Sweden Cup for trainer Holger Ehlert and Riordan got the opportunity to train the horse in the summer of 2017. The charismatic trainer was really pleased after he clinched the victory in one of the most prestigious harness races in the world.

“When Twister Bi won at Yonkers last fall, it was more money in the purse, but that victory dosen’t top winning the Elitlopp in Sweden, a country that has the best harness racing in the world. After the elimination, I understood that Pastore Bob could take the lead even in the final, especially when Johan Untersteiner put a sharper bridle on his horse. I was satisfied when Ringostarr Treb was on the outside of the leader, because my horse got the advantage and felt really courageous at that moment. But then Kihlström came with Propulsion you never feel safe, but today was our day,” Riordan said.

Ringostarr Treb earned $371,000 in total on this sunny Sunday at Solvalla.

Approximately 45.000 spectators visited Solvalla during the two days of great harness racing, but unfortunately, many of them will remember the misjudgement in one of the heats of Elitloppet.

Giveitgasandgo best among the 4-year-olds

Norwegian trainer Frode Hamre had at one point this spring small intentions to race 4-year-old Yankee Glide son Giveitgasandgo in the Elitlopp. Giveitgasandgo was runner up behind Ringostarr Treb in Olympiatravet and in Algot Scotts Minne at Åby, but Hamre instead aimed for the Fyraåringseliten at Solvalla, which was a wise decision with all facts on hand.

The division for the mares saw Italian trainer Alessandro Gocciadoro’s Virgina Grif (Varenne) as a winner in 1:53.2. Gocciadoro had a tremendous weekend at Solvalla with six victories, among the Sweden Cup on the Saturday’s card.