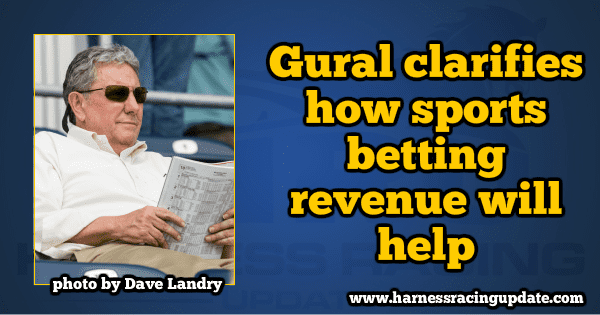 Sports betting revenue will not be used by the owner of the Meadowlands to pay off the $100 million invested in building a new grandstand, but rather to recoup his personal investment in the purse account. Meanwhile, SBOANJ treasurer Mike Gulotta — the CEO of Deo Volente Farms — believes the future is bright and Gural doesn’t get enough credit for his investment in the business.

Meadowlands Racetrack chairman Jeff Gural said he would like to clarify statements he made in a story HRU published Friday (full story here) to assure horsepeople that they will benefit from sports betting. Members of the Standardbred Breeders and Owners Association of New Jersey (SBOANJ), raised concerns Friday that Gural implied in the story that he was hoping to use revenue from sports wagering to recoup the some $100 million he and his partners spent to build a new grandstand at the Meadowlands before purses received any benefit.

“Someone might have gotten the wrong impression that I was looking to get back my $100 million investment before purses get a cut. That was certainly not the case,” Gural said. “However, the horsemen should understand that the only reason the Meadowlands has been racing the last couple of years is because I have been personally subsidizing it. I hope they don’t think I was put on this earth to provide a place for them to race that loses millions of dollars every year.

“I would like to get back the $5 million that I overpaid the purse account in order to maintain the stakes program. I would also like to get the $10 million I have lost over the last few years back and I am working tirelessly to try to convince the state to once again give us the $30 million purse subsidy that we were receiving for thoroughbreds, standardbreds and breeders before Governor Christie decided to pull the plug.”

A statement from the SBOANJ issued Saturday said the group met with Gural on Friday to discuss a number of issues, including sports betting, which is expected to be legal in New Jersey in a matter of weeks.

“Contrary to the misunderstanding of an earlier published statement, Jeff assured us that the New Jersey horsemen would participate in any revenue that would be generated from sport’s betting as a much needed addition to the Meadowlands purse account,” said the statement from SBOANJ president Mark Ford. “Jeff has consistently acted in the best interest of all segments of harness racing, and we left our meeting with little doubt that he is always working for our best interests. Hopefully we can all look forward to a bright future for the New Jersey racing and breeding program.”

“Jeff, from the time that the existence of the Meadowlands was threatened, has always stepped up,” Gulotta said. “He has always put resources that were necessary to continue to make the Meadowlands the best racing venue in the standardbred world. There’s no doubt in my mind that he’ll continue to do so and that is based on having discussed this matter with him (Friday). I’m extremely confident that the horsemen will benefit in some way, shape or form, some fashion, from the new revenue source that is going to become available in the form of sports betting.”

Gulotta said, Gural, “certainly didn’t mean that he wants to recoup his investment in the building, (but) I think, he has subsidized the operation and I think what he was referring to was essentially getting money back from what he loaned (purses).

“He specifically said that’s not what he meant, in my presence and in the presence of other SBOA members.”

Gulotta, who has close ties to New Jersey governor Phil Murphy, said the state’s sports betting legislation, as currently drafted, does not contain a mandated cut for purses. The only allocation is for tax revenues.

Gulotta explained that the legislation, as currently written in New Jersey, will allow casinos and racetracks to establish sports betting both at its physical locations and online. He said he’s heard estimates that the sports betting market in New Jersey will be worth in the range of $10 billion after five years of maturity.

“At minimum, the win percentage is five to seven per cent,” Gulotta said. “So, you’re talking about $500 to $700 million of net revenue to the operators, including the racetracks and the casinos. Then, it becomes a question of ‘Okay, what percentage of the market do I own as the Meadowlands and what percentage do I own on the Internet?’ That’s going to depend on whom you pick as a (gaming) partner.

“Obviously, you’ve got the Atlantic City sites. You have Golden Nugget and Churchill Downs, and then I’m sure Draft Kings and FanDuel will be in the mix, so it’s a question of who does the best job in attracting business online. That’s going to dictate the market share.”

Gulotta said if one estimates the Meadowlands and Freehold get 12.5 per cent of the sports betting market, the cut for the two harness tracks, taken together, could be between $62.5 million and $87.5 million.

Even the restriction on the Meadowlands being open on Sundays during the National Football League (NFL) season might not be as bad as once thought. In theory, with online betting, a sports fan could be sitting in the stands at neighboring Metlife Stadium watching the Giants and Jets and placing bets on the game — or any of the sports offered — through the Meadowlands’ Internet portal.

Gural reiterated that beyond sports betting, he is working hard on lobbying the state to reinstate the $30 million annual purse subsidy the horse racing industry once had.

“My main concern is that over the next few years we are going to see the purses at Yonkers, Pocono and Chester increase dramatically due to the horse shortage since the money available for purses is the same every year but the number of races will continue to decline. In order for the Meadowlands to be competitive I believe we would need around a $9 million to $10 million purse subsidy from the state and I do not envision making nearly enough money to be taking $9 million or $10 million from sports betting and adding it to the purse account,” Gural said.

“I have been working nonstop on this issue and it would sure help if the horsemen would stop worrying about how much money I am going to make and focus on the major issue of how do we get the state to resume giving the horse industry $30 million that they were previously receiving. It is very frustrating to have to defend myself considering the only reason the Meadowlands is here is because I have invested tens of millions of dollars, along with my partners, and have personally been subsidizing it the last few years since it loses money.”

Gulotta said he doesn’t think Gural, “gets enough recognition or praise for everything that he’s done. Some days he has bad days and he says things that he really doesn’t mean, but if you look at the core – the core is dedicated to success of the standardbred industry and, more specifically, to the Meadowlands.”

Gural was quick to point out that, “anyone who knows me realizes this is my passion and I will always do my best for the industry but for the Meadowlands to once again feature the best horses and drivers we need that $30 million dollar purse subsidy.”

Gulotta said he is optimistic some relief will come from the state, especially since New Jersey senate president Steve Sweeney has expressed support for helping the horse racing industry be more competitive with neighboring states.

“The legislature in New Jersey understands that we are currently at a competitive disadvantage,” Gulotta said. “There will be a proposal in the budget, or somewhere else, to try to level the playing field so that we can compete more effectively and can attract horses to the Meadowlands. Part of what makes harness racing great is large, competitive fields, which also increases the betting handle, which increases the ability to reinvest in the facility… so, I think that’s recognized, the fact that we need to be competitive in order for this industry to continue to be a vital part of New Jersey’s economy. We need to be competitive with our neighboring states and that is not lost on the legislators at this point… I think if our efforts are successful — and that’s efforts on several fronts, not just sports betting, which is now approved — and the will of the legislators is to support the industry, I think the Meadowlands’ purses will be very competitive with the highest purses in neighboring states.

‘We’ve worked hard, including Jeff. Jeff has worked very hard at educating key legislators. I applaud him for that and he ought to be applauded.

“If it weren’t for him, there’s a reasonable chance that the Meadowlands would no longer be here. He stepped up at the point in time when Christie threatened to close the track and raised the money to build a new facility. It’s a beautiful new facility. That should not be lost. That should be remembered… He’s doing a lot of work, working very hard at 76 years old. Most people, especially given the point in his life that he’s at and given how blessed he’s been, would say, ‘I’m not going to work that hard,’ but he’s working very hard and we should be appreciative of it.”