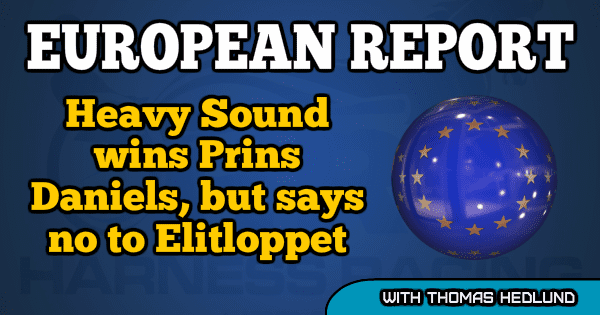 Heavy Sound wins Prins Daniels, but says no to Elitloppet

International Trot winner Twister Bi made his comeback in the $115,000 Prins Daniels race at Gävle racetrack on Saturday afternoon. The Jerry Riordan-trained Varenne son got sick in Paris last winter and Riordan had told the harness racing fans that Twister Bi would not participate in Elitloppet no matter what happened in Gävle.

The winner of the Prins Daniels race receives an invitation for the Elitlopp, but the connections of the winner, Heavy Sound (Ken Warkentin), also said no to Solvalla’s big race after the victory in Gävle. Heavy Sound, owned by SRF Stable, who won with Dibaba and Perfect Spirit in last week’s Pokal races at Åby, performed more than great when he attacked from third over with 600 meters to go. The 6-year-old gelding was in front 300 meters later and was outstanding in 1:51.2 over the mile for driver Kenneth Haugstad.

“This horse is just a favourite of mine. I won E3 final with him here in Gävle three years ago and it’s a big thing for me that I still am allowed to drive him, even though the horse has changed trainer,” said Haugstad.

Trainer Daniel Redén was clear when he said Heavy Sound will stay out of Elitloppet this year.

“We’ve got the horse in great shape right now, but Heavy Sound has had problems with his legs and we play it safe. There are many big races for him to enter this summer,” Redén said.

Twister Bi made a short break from the start and was then second after a stunning finish from fifth over. Riordan’s top trotter showed that he’s in same great shape as last season.

French-bred Up And Quick got an invitation for the Elitlopp this week and the Prix d’Amérique winner from 2015 will make his second start in a row at Solvalla next weekend.