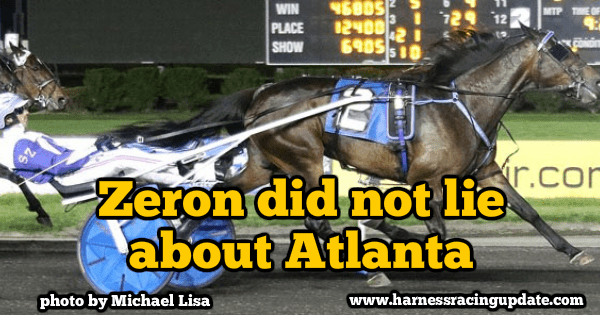 Horseman Rick Zeron is pumped after his sophomore trotting filly Atlanta burned up the Big M with a 1:52 mile in her 2018 pari-mutuel debut.

A few minutes after 3-year-old trotting filly Atlanta posted an impressive 1:52 victory at the Meadowlands Friday night, a text popped up from her trainer and part-owner Rick Zeron that simply said, “I don’t lie.”

Ever the showman, Zeron was not saying he had been defamed or even disbelieved, really. Rather, he was just sending an “I told you so” message to indicate he wasn’t telling tall tales in March in Florida when he insisted Atlanta (full story here) had a heck of a shot to defeat Manchego, Jimmy Takter’s undefeated wonder filly. Manchego, the 2-year-old Trotting Filly of the Year in the U.S. in 2017, easily won her qualifier Saturday afternoon at the Big M in 1:53.4.

Asked whether he has concerns about jinxing his filly by talking her up, Zeron, a man who rarely lacks confidence, said superstitions are for people that are unsure of what they have and need luck on their side.

“You get superstitious when you’re not quite sure, when you’re on the border of whether she’s good enough, whether she’ll need to draw inside or need to have everything go her way to get the job done… In her (April 28) qualifier she came home in 27:1 and :54 flat.”

Zeron’s son, Scott, was in Atlanta’s bike for her 2018 pari-mutuel debut Friday — as he was for her qualifier — and came away impressed both times said dad who drove the filly in all 10 of her 2017 starts when the daughter of Chapter Seven—Hemi Blue Chip posted a 4-0-1 record, set a 1:54 track record at Vernon Downs and earned $123,411 for Zeron, Holland Racing Stable of Niagara-On-The-Lake, ON, Howard Taylor of Philadelphia and Brad Grant of Milton, ON.

“My filly stepped up and came from seven or eight lengths off the pace and smoked them down the lane,” Rick said.

The way Rick tells it, Scott was initially skeptical about his father’s bold statements about Atlanta.

“He always doubts the old man,” Rick said with a thick laugh. “I talked to him for a little bit after the races (Friday) night and he said, ‘She’s a serious filly’ and I said ‘I told you.’ He said, ‘When I tipped her, Yannick wasn’t keeping up to Miller, and I snapped her out and she just took herself out. When she grabbed a hold of that gear, man, I knew I was going to win halfway down the lane because she was just digging harder and harder to go by them.’”

Rick said he knew Atlanta could trot in :52, but admitted May 11 may be a tad early to do so.

“It’s a little early to trot in :52,” he admitted. “I could see doing that on Hambo Day or something, but she’s very easy on herself. She’s an extremely smart filly and does everything you could ever ask her to do. She takes care of herself very well and she’s just a great filly to be around. I’m just completely grateful to be able to have a filly like this, to own a piece of and train.”

Fortunately, said Rick, Atlanta has a relatively light schedule leading up to the ultimate goal — the Hambletonian Oaks.

“On the way to the Oaks, she is going to Vernon Downs next Friday for the Empire Breeders. Then she goes back, 10 days later, in the final of the Empire Breeders. I think it’s on a Monday. Then, she’s off for almost a month until there’s a (New York) Sires Stake in Tioga. Then, she’s off almost another month again and then I’ll race her in the Sires Stake at Vernon. Then nine or 10 days later, it’s the Hambletonian Oaks,” Rick said.

“She takes care of herself so well that I’m not shy of having her off for three weeks in between races, whereas a lot of horses that I’ve trained they need to race constantly to stay sharp and on point and ready to rock ‘n roll on the big stage. This filly doesn’t.”

Rick said he was initially attracted to Atlanta — who was bred by Stefan Balazsi’s Order By Stable of South Dakota — because she is a Chapter Seven.

“I watched the horse race many, many times —Chapter Seven — loved him as a stallion and was fortunate enough to buy her,” Rick said of the $60,000 purchase at the 2016 Harrisburg yearling sale. “The only thing I didn’t like was her name. I changed her name to Atlanta. Her name was originally Django Unchained. Why, I don’t know. Great movie, loved the movie, but for a filly it’s very odd. For a Muscle Hill colt or something like that, maybe, but not a trotting filly.”

Rick said he picked the name Atlanta as a tribute to new members of his family. His daughter Jade’s father-in-law lives in Atlanta.

“We were having a few beers and I thought to myself, ‘That’s a nice name for a horse, if I can get it.’”

As for how far Atlanta the filly can go, Rick Zeron said she is a “creature” with scary talent and he has no idea how great she could turn out to be.

“I know how to make big statements,” he said, laughing.