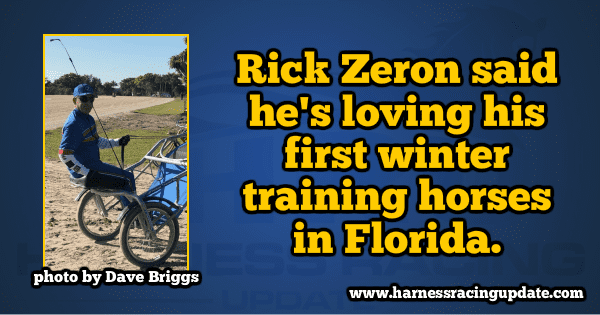 The Ontario-based horseman has the Hambletonian Oaks circled on his stakes calendar.

Trainer/driver Rick Zeron would never be confused for a wallflower, so it’s not surprising he made something of a bold prediction when he said he expected his sophomore trotting filly Atlanta might just take down Jimmy Takter’s undefeated wonderhorse Manchego in 2018. Machengo was voted the Dan Patch winner as 2-year-old Trotting Filly of the Year.

“If Atlanta is as good as I think she is, I think I can give Manchego a good run for her money — and not just once, either, but during the whole year. I staked her right up and I know Takter staked his filly up, so I imagine him and I will go at it pretty good this year,” Zeron said.

As if on cue, Atlanta was just coming off the track at Sunshine Meadows and her reinsman was positively gushing about her.

“She’s a creature, just a creature,” he said as Zeron flashed his best “told you so” expression.

“It’s unbelievable how fast she can go,” Zeron said.

In 2017, Atlanta (Chapter Seven—Hemi Blue Chip) earned $123,411 with a track record mark of 1:54 at Vernon Downs and a slate of 4-0-1 in 10 starts for Zeron, Holland Racing Stable of Niagara-On-The-Lake, ON, Howard Taylor of Philadelphia and Brad Grant of Milton, ON.

“She’s a really nice filly,” Zeron said. “I was really happy with her last year. She made a few bucks, she got the track record at Vernon Downs. Mark MacDonald drove her there for me.”

It is the first winter the Ontario-based horseman — and father of top driver Scott Zeron — has trained in Florida and he vows to be back next winter.

“Having (Atlanta) here, I think, was a big advantage, along with Courtney Hanover, another trotting filly that I have. Over the winter, she’s really grown up and grown out and gotten stronger,” Zeron said. I think being down here, for myself and my partners and my horses, I think this is the place to be. We haven’t missed one day of training this year. We didn’t miss one day of jogging. I’ve got horses training up in Canada and Wayne Preszcator is my assistant trainer up there and we’ve missed two weeks, over the winter… it’s not the track’s fault. It’s the raining, the freezing rain. Everything freezes up. If there’s a snowstorm you can’t get on. Here you don’t. You come to work and it might be a little cool in the morning, but it’s sure nice for the horses… It’s also nice for me. I love it. I’ll be back for sure.

Zeron has 23 horses in Florida. Sixteen of them are 2-year-olds.

“I stayed in my zone with the Cantab Halls, and I’ve got a couple of Credit Winners. I have four Cantab Halls. I’m quite pleased with how they’ve been training down here, but I’ve got a mixed bag of two-year-olds,” Zeron said. “I’ve got some pacers, some Sportswriters. I’ve got one Sportswriter that’s phenomenal. Just outstanding. His name is Heisman Player… I’ve got another (Sportswriter) that could be a player and his name is Ballpark Frank.”

The biggest race Zeron has circled on his calendar is the Hambletonian Oaks for Atlanta and Courtney Hanover.

“The Oaks is spot-on, that’s my biggest possibility with Atlanta and Courtney Hanover to be in there,” he said. “My second is that Shamballa is training back unbelievable. I would love to win the Canadian Pacing Derby, that’s going to be his first stake race in September. He’s down here with me, so is Mass Production, a trotting colt that I have. He’s four years old, too, now. They are going to stay here with me and then they’ll go back to Canada and I’ll just play around in the open classes with Shamballa, and Mass Production will just stay around the open classes until the Maple Leaf Trot.”