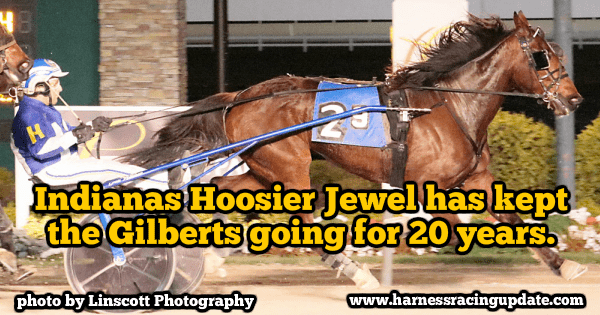 Hoosier Jewel has “made my whole horse racing career”

When Sally Gilbert and her husband, Mel, purchased trotting filly Hoosier Jewel as a yearling in 1999, they did so hoping to develop a quality racehorse. They ended up with that and so much more. Gilbert is now campaigning, and winning, with Hoosier Jewel’s offspring at Hoosier Park Racing & Casino, doing so with the loss of Mel still fresh.

“She’s made my whole horse racing career,” Gilbert said of the mare, purchased at the time for $5,700. “She’s kept me going for 20 years. All her foals, they’ve kept us racing, and that’s how we’ve made our living.”

Sired by Delphi’s Oracle, Hoosier Jewel made her mark in Indiana racing in 2003 when she trotted to victory in the $87,800 Indiana Sires Stakes final for older trotting mares. Sent off as the favorite at Indiana Downs that day, the trotter won by nearly five lengths with Mark O’Mara in the bike, tripping the timer in 1:56.4. That five-year-old season was her best as she claimed five wins and hit the board in 10 of 13 starts. She went on to earn $83,000 of her $177,029 career bankroll that year.

“She was like a little race car. She was hard to get gaited when she was a baby. When she trotted she would flip her feet out real funny,” explained Gilbert. “She was just different gaited, so it took a long time to get her around. But once she figured it out, she was real good.”

It wasn’t just Hoosier Jewel that brought the couple success. Hoosier Cadillac, a gelding out of Hoosier Jewel’s full sister, Hoosier Delcrown, won 24 of 47 career starts and earned over $300,000. The trotter captured an Indiana Sires Stakes final at age seven.

Hoosier Jewel went on to race through age eight before being retired after the 2016 season to start the next phase of her career. In the new endeavor the mare has produced four horses of racing age, the youngest of the quartet is a freshman this season. Her fifth foal, a colt sired by Musclesprinctonian, arrived earlier this spring. Now 20 years of age and diagnosed with Cushing’s Disease (also known as Pituitary Pars Intermedia Dysfunction or PPID), Gilbert believes this is the trotter’s last foal. She does not intend to breed her this season.

Hoosier Jewel’s first foal, Captain John Henry, has earned just over $250,000 for his Cochran, Georgia-based trainer. The gelding is a product of stallion Keystone Savage, also the sire of Hoosier Jewel’s second foal, Ride Wilma Ride. Now nine years old, Captain John Henry has been competitive in nearly all his starts this year, and could improve with a recent medication change.

“We did find out he was bleeding over Lasix. We always kept him at five or six CCs of Lasix,” offered Gilbert. “We moved him up to 8 CCs and he responded. He really raced well last week.”

The trainer describes her veteran trotter as “easy” and very similar to his dam. Between starts Captain John Henry enjoys being turned out, and he wears virtually no equipment.

“Basically, he wears nothing on the track. He just wears a pair of trotting boots and that’s it,” she said. “He’s just a very quiet horse, just like his mother. She was just like that.”
Ride Wilma Ride, the full-sister to Captain John Henry, was a six-time winner for Gilbert, earning $42,166. Retired from racing after the 2016 campaign, the mare will continue Hoosier Jewel’s legacy. This spring she delivered her first foal, a Musclesprinctonian filly.

The newest of the mare’s winners is Jimmy Dean, an Ohio-bred sophomore by Break The Bank K. He is the older of two foals by the Ohio stallion. A third Ohio-bred foal, sired by Victory Sam, was struck by lightning and killed at three months old. Mel Gilbert decided to breed in Ohio, Sally believes, with the intent to sell the subsequent trotters. Her husband did not get a chance to see the plan through, however, passing away November 28 at the age of 77 from heart failure.

“He wanted to continue racing. But he did breed in Ohio so that he could sell them. I’m almost sure that’s what he had on his mind,” Gilbert commented. “He just wanted to get them started and sell them.”

With that in mind, Jimmy Dean is consigned to Tuesday’s Blooded Horse Sale. He is cataloged as Hip 383 in the sale. Before taking up residence in a new stable, Jimmy Dean teamed with his half-brother to do something special that went unnoticed by many. Competing May 5 at Hoosier Park, the trotter picked up his second seasonal win, completing the mile in 1:59.3. On that same card, Captain John Henry picked up his first seasonal win. The two trotters did so on what would have been Mel Gilbert’s 78th birthday. It was a poignant way to remember the horseman.

Gilbert now moves forward without her husband. Harness racing was a common interest they shared together. And it is harness racing that provides comfort, thanks in no small part to Hoosier Jewel’s offspring.

“All Jewel’s babies, all they want to do is race. They’ve all got speed. They’re going to race and they’re good,” she said. “Harness racing has been good to me. I’m glad I have harness racing.”