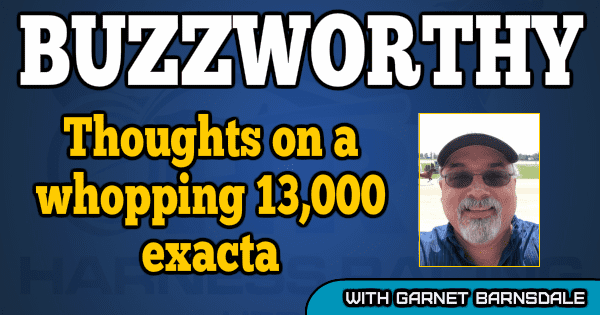 There was quite a buzz coming from Northfield Park Wednesday night, all caused by 179-1 shot Royal Player winning race 4 and topping some monster payouts – one of which I believe might be a North American record for payout in a harness race.

It’s not every night that you see horses paying $361 for every deuce win from the 8-hole on 1/2-mile tracks, but everything lined up for this six-year-old gelded son of Strong Player out of the King Gypsy mare Gypsy Doe at the start when 2-5 favorite Howabouta Big Guy broke stride.

Despite that stroke of luck, though, Royal Player made his own trip and was full value for the tote-board-exploding win. In rein to Luke Ebersole, Royal Player – who was winless in four starts – rocketed right to the front off the gate and led to just before the opening 1/4, timed in :29.1. At that point, he relinquished command and sat in new leader Diggity Dog’s pocket until the 3/8ths pole where Ebersole re-moved him to the front.

Royal Player shook off an attack from three-wide challenger Smell That Rock as they passed the 3/4 pole in 1:28.1, then held 71-1 shot Dundee Dan safe by a length at the wire to record a 1:57.3 maiden-breaking score for trainer/driver Ebersole and lessee owner Ray Gingerich from Ohio.

I couldn’t verify it for certain, but I believe the exacta payout of $13,000 for a dollar is a North American record for the wager. No one I asked on social media could tell me of a payout that topped it. Anyway, when 179-1 shots top 71-1 shots in exactas, you can be sure there is going to be a buzz.