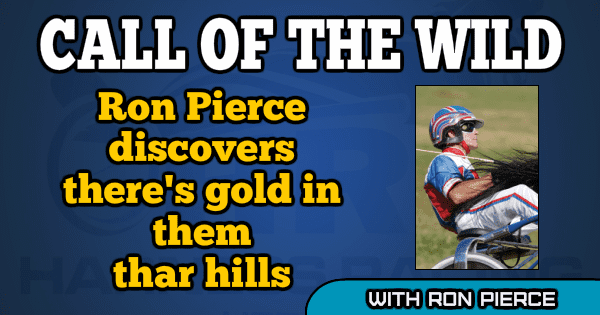 There’s gold in them thar hills

(Editor’s note: This is the first in what we hope is a semi-regular feature chronicling the wilderness adventures of noted outdoorsman and retired Hall of Fame driver Ron Pierce.)

Checking in from a side trip to Oklahoma City on his way to the National Rifle Association convention in Texas with his mother, retired Hall of Fame driver Ron Pierce is talking about how he is spending his golden years — and Pierce is taking that expression literally, though he’s only 61.

He spent last summer prospecting for gold in Alaska and continued the hunt when he moved to the wilderness of northern California for the winter.

“Nothing huge, but I’m getting better and better at it. I don’t want to quote a weight or a price or anything like that,” said Pierce, who knows any good prospector should keep his mouth shut about what he finds where.

“You’re looking for the pocket or streak of gold. So you prospect to find that pocket. Once you find the pocket, you clean it out. It trickles down the side of hills. In streams, there’s like a stream of it. If you find a stream, you follow it up and you might have tons of dirt you have to move – all by hand – to get to that pocket, the source of where it’s trickling down the hill from.

“The main thing I’ve been doing the last few years is learning about it. It’s not just scattered on the ground all over the place, but there are little trails on the ground where you can find that streak and the streak will take you to the pocket, the source. That’s what you want to find – the source – and then clean it out.”

Pierce said he did well prospecting in northern California.

Pierce said it’s exciting to find gold, but, “When you do find it, it turns into work getting it out of the ground.”

Fortunately, digging for gold is helping him recover his health from the back and neck surgeries that ended his driving career in 2015 after he won 9,570 career races and collected purse earnings of more than $215 million.

“It’s great for me, because I’ve been staying in shape. I’m in better shape now that I was in any year that I was racing horses, as far as cardiovascular goes. My strength is way up,” he said. “I got my legs and hips really strong, so as long as I don’t overstress it, it’s really good.”

Pierce spent last summer in Alaska. He ventured to a small house he owns in Great Falls, Montana for a bit before heading for Washington State with his brother, Artie.
“We hunted elk in Washington State, for a couple of weeks. From there, I went down to northern California, up into the Trinity Alps right up by the Oregon border. I hung out there until just last week. I was fishing, hiking… I went there to get out of the severe weather, the ice and snow of the winter. I didn’t put a coat on one time.”

Pierce said he landed in a small town called Lewiston and, apart from prospecting, he spent a lot of time fishing for steelhead trout.

“The fishing was just unbelievable… It’s a very well kept secret in the nation about how good the steelhead fishing is on the Trinity River. I had a blast. I got down to using two-pound test with a two-pound fluorocarbon line for trout that were between three and eight pounds. It was a real challenge to land them,” he said.

“When I did catch one and the hook didn’t break off, I had a real battle going. It became a challenge, like keeping a bad trotter trotting. It’s the same thing, if you can get the fish in without breaking the line or spitting the hook, you’re doing something. You can compare it to getting a really bad-gaited horse. If you can win with them, then you’re doing something.”

Pierce said he stayed in California until last week when he traveled back to his home in Montana.

He and his mom arrived in Oklahoma City last Sunday to visit family. After hitting the NRA convention, they will travel to San Antonio to visit more family and friends before flying back to Montana around May 10.

“I’ve got a couple of days of getting repairs done on my rig and then I’m going to head back up to Alaska for the summer. So, life’s great,” Pierce said, explaining that his “rig” is, “a really nice travel trailer, I tow it all, with a quad in the back, a boat in the back… I’m very comfortable. I have satellite television, an entertainment center. I can lie around and relax if I want to or I can get out and enjoy the outdoors.”

He also has a freezer in his home on wheels that he filled with moose meat last summer in Alaska, enough meat to keep him going through the winter in California where he just fished for trout.

“I didn’t need to shoot anything. I still had enough moose from Alaska in the freezer,” he said.

Pierce said you won’t catch him at any harness tracks this summer.

“I’m going to look for gold and fish all summer (in Alaska) and then in the end of August or early September, I’ll be hunting,” Pierce said. “In September, I’ll either kill a moose or caribou for my hunting season up there, so I can fill up that freezer full of meat again… Then I’ll be coming back home.”

By home, he now means Montana, not New Jersey. Though, he said Alaska was the nicest place he’s ever been.

“The Arctic Circle in Alaska, up in the Brooks Range. That’s way up into the north throat. That was just unbelievable and I might just wind up there again this year. We’ll see how it goes,” he said of the spot that’s some 5,000 miles from the Meadowlands Racetrack. “I’ll be in Alaska for about a month-and-a-half and then my brother Artie is going to come up. If I can get on the gold while I’m there, before he gets there, then I’ll just stay in the area I’m at. But, if not, then him and I will head up to the Arctic Circle for two or three weeks.”

Pierce, who was helping feed his family before he started kindergarten, said he’s at home and at peace in the wild, but could never disappear completely, forever.

“I just can’t seem to stay isolated. I’ve got to come out for supplies and to socialize and to take care of business, otherwise I’d just stay there,” he said.

“I’m really loving life now. Life’s great. It really is. I have no complaints about how things have been going for me in the last couple of years. I had a great career, great horses, but it was pretty much all just go, go, go all the time and I really couldn’t sit back and smell the roses like I can now.”