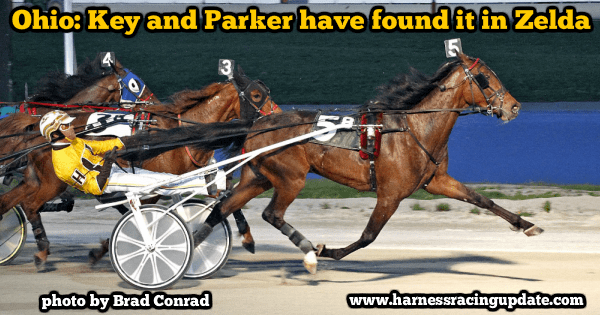 Key and Parker have found it in Zelda in Ohio

Trainer Norm Parker is succinct when you ask him about his three-year-old filly trotter, Looking For Zelda.

Owned by Robert J. Key, the daughter of Break The Bank K–My Winning Way has proved she is one of the best in the Buckeye State and ready to take on North America’s best.

“When I got her last year, she came from Florida and trained okay. Nobody really bragged on her or anything,” said Parker. “We trained her a couple of times and liked her. She’s been a pleasure. If every horse was like her, all trainer’s jobs would be easy.”

Looking For Zelda started her career with five straight wins in either the Ohio Sires Stakes or the Ohio State Fair. She came into the $250,000 Ohio Sire Stakes Final undefeated and as the prohibitive 1-9 favorite. But an afternoon of rain, unseasonably cool temperatures and a sharp Impinktoo spoiled the evening.

Her next start would be at the Delaware County Fair in the $56,700 Ohio Breeder’s Championship. Saddled with the outside post, Zelda and her regular pilot Tony Hall battled David Miller and Risky Deal down the lane. In the final strides Zelda came up a half-length short in 1:57.

“I sit there and think about last year and the two races she lost in Ohio. They were so close. You are kind of disappointed, but at the same time you can’t get down. She went her race and she got beat for whatever reason,” said Parker. “We know they aren’t cars and robots and they are going to have their ups and downs.”

Despite the loses, Looking For Zelda was ready to take on Grand Circuit competition.

Zelda was sharp in a 8 ¼ length win in the $30,000 Simpson Memorial at Harrah’s Philadelphia. The next week she scored a neck win at the Red Mile in the $289,000 (div) International Stallion Stakes. The winning time of 1:54 was a new lifetime mark.

With a pair a quality wins over open stakes company, Key and Parker decided to try Looking For Zelda in the Breeders Crown. A fifth-place finish in the elimination earned the homebred a spot in the $600,000 final, where she finished 10th and last.

“The race at Lexington, I was extremely proud of her. We were stepping into different company and she answered,” said Parker. “The Breeders Crown was a pipe dream. We felt we had a shot at some money. In the elimination she did okay. She trotted a strong enough mile. In the final, the bad conditions and the trailing position. Just throw that mile out.”

Looking For Zelda finished her two-year-old season with an 11-7-2-0 record and earned Ohio divisional honors.

As Parker was getting Zelda ready for her sophomore season, he encountered an unexpected challenge, a two-week quarantine of his entire barn at The Meadows due to a breakout of the Equine Herpesvirus.

“We wanted to be ready for the (James) Hackett (Memorial) but the quarantine kept us from being ready. She had two weeks in the stall, no movement. My barn was under the full quarantine. It put me behind, but obviously, she has come back to where I wanted her.”

Her first 2018 start resulted in a win in the $50,000 Scarlet and Gray Invitational. The 1:55.2 clocking was a new Miami Valley Raceway track mark and signaled that Zelda was in mid-season form.

“I think she has lengthened out a little bit. She got a little bit bigger. She’s not a real robust filly that carries a lot of weight. She takes care of herself,” said Parker. “She’s such a joy to be around and I’ve said that since day one.”

Seasonal start number two will come in tonight’s $50,000 leg of the OSS at the Lebanon oval. Looking For Zelda in the 3-1 morning line choice despite drawing post #9.

“We have a little more to do this week from the nine hole. There is a lot of nice fillies in that division. We have our work cut out for us. They just don’t hand you the check,” said Parker. “We are going to go down there with a positive attitude and see what she can do.”

Looking back on what has occurred and what is still in front of Looking For Zelda, Parker remains humble.

“It’s nice to have one that you feel will always go out there and give you her A game. That’s all you can ask for.”