Keep your customers happy because they’re all you have

The millions watching and hundreds of thousands attending the Kentucky Derby is great, but in the grand scheme of things they are not very important.

The Kentucky Derby attendance and betting metrics are pretty impressive. Derby day handle alone will be somewhere around $200 million. Attendance for the Oaks and Derby will approach a mind-boggling quarter of a million people. Good times.

Churchill Downs Inc. deserves a lot of credit for those numbers. Since about 2008, the company’s strategy has centered completely on the event. They’ve broadcast the Oaks on Bravo to reach a new demo. They created a red carpet event, hosted by people who likely don’t know a mane from Maine. They sell the week with ancillary events, many which have little to do with the sport, or wagering aspect of horse racing.

When you do that, you attract a certain type of customer – one not unlike the woman described in this tweet: 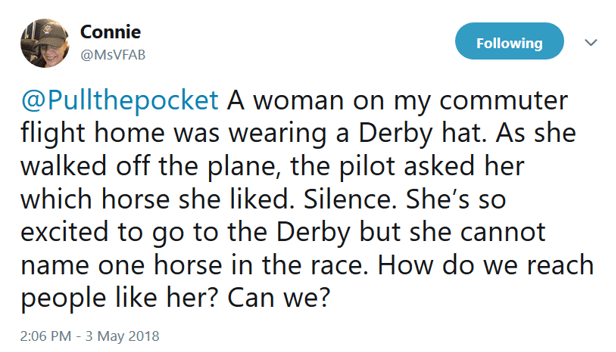 This type of customer causes great debate in the sport of horse racing. Insiders wonder why a company like Churchill Downs spends so much money to attract people who don’t know any of the horses’ names; why they’re selling parties not superfectas; why their focus seems to be on this demographic only.

The answer to that, in my view, is that when you market (or brand market) with a finite amount of money, you attack the lowest hanging fruit. That’s the woman on the plane.

The woman on the plane will come to the Derby, spend hundreds or thousands on seats, merchandise and concessions, and that revenue goes right into the company’s pocket. If she bets, that’s great too, but it’s not nearly as important – the 20 per cent blended takeout is sliced and diced to horsemen, the state, and others. If she wagers $200, it’s maybe $6 to the company’s bottom line.

With those cost and revenue numbers wouldn’t you sell the sizzle, too? This is why so many other tracks have followed Churchill’s lead.

Conversely, let’s look at the other side of the coin – selling the sport to bettors who will become lifetime customers, and who will bring in hundreds of thousands of dollars of revenue throughout their betting life. That’s a whole lot tougher. They’re not going to see a red carpet or a tote board and run to the nearest racetrack, and these types of people are very hard to find in the first place.

Let’s say you land a handful of bettors who do want to learn to wager, though, and maybe you offer them a free Derby bet for the big race. Those folks have to sign up to a betting site or be near a racetrack, and if they want to bet more than just their free wager, not only to they have to set up a funding mechanism (which can be tricky and another barrier), they likely have to read a half a dozen handicapping books to get up to speed.

Those barriers to entry are real and each one of them acts as a leak, with your handful of potential bettors turning into none in a hurry. It’s hard work.

The alternative, as I see it, is to employ the same strategy Churchill Downs Inc. uses – go after the lowest hanging fruit. And the lowest of the low is the current horse racing bettor.

The existing bettor already knows the sport. They have an ADW account with an established funding mechanism; they’ve already read Ainslie, and Brower and Brohammer and Crist; they already know how to be a customer. 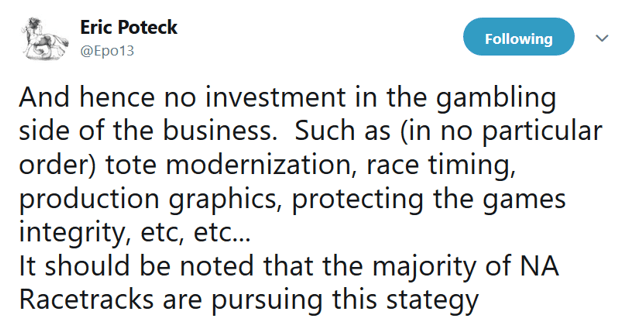 Spending “marketing” money to encourage them to bet more via enhanced rebating (lower takeout), investing in a better infrastructure, and examining customer wants and needs at each turn are three possible tactics. That might not be flashy marketing spend – it doesn’t involve billboards, red carpets or celebrities, but it’s effective.

If you watch the Derby this weekend and see all the happy people, be happy. It’s great to witness so many enjoying an event showcasing the equine athletes we all admire. But remember, most of those people won’t be playing the third at the Meadowlands next Saturday. Those who will might not seem as important as a woman on a plane in a Derby hat, but they are.

They are your customer, and when the lights of the twin spires go dim, and all the happy people have gone home, they’re all you have.