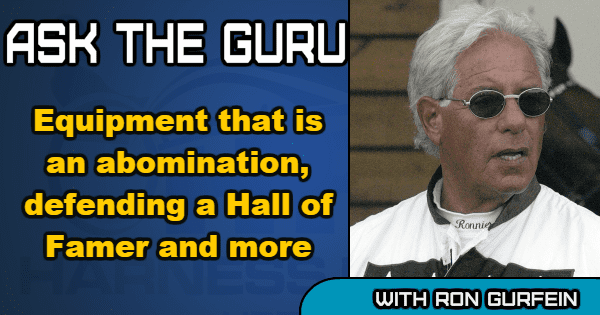 Equipment I hate, thoughts on disparaging a Hall of Famer, drivers picking horses and the importance of the Big M in the quest for the Hambletonian

It’s hot and quiet in south Florida. The colts have headed north and it’s almost time for what someone called “the slaughter of the innocents.” Baby races. When I was training I rarely had the chance to watch many of the other trainers’ colts, but writing about them this year makes the early qualifiers much more entertaining for me. Honestly, I am looking forward to watching the debuts of the three- and four-year-olds, as well.

Many owners have asked me to list my selections from the Lexington Selected Sale and the Harrisburg Sale, but unfortunately I cannot because my employer has enough of these selections that Murray Brown will figure out who it is.

Clay Horner asks: How important is it for a top prospect for the Hambletonian or Oaks to prepare at the Meadowlands or another big track?

In my experience it was very important. With the exception of Continentalvictory’s win in the Yonkers Trot, all her races, as well as those of Victory Dream and Self Possessed were raced at the Meadowlands — mainly because they were all extra large horses and I felt the tight turns would compromise their soundness before the big race. When you have a top horse the only way to eliminate yourself from the big dance is to hurt him. I also trained every five days instead of twice a week like everyone else does.

But in all fairness, times have changed. All the good sires are no longer standing in New Jersey where I was able to use the sires stake program and the Historic Series as a stepping stone to the Beacon Course (Stanley Dancer) and on to the Hambletonian with maybe a three-year-old open thrown in to fill up the time. It was perfect then, but today you have Pennsylvania Sires Stakes all on five-eighths mile tracks, plus you can’t hope that an open will fill at the Meadowlands every week.

To me, the answer to you question is that without the New Jersey Sires Stakes it would be almost impossible to do, although I would be all for it.

Arezee@apex.net asks: Do drivers pick their horses before or after the post position draw?

When a trainer enters a horse, he names a driver. When the draw is done, the overnight sheet (list of races drawn with horses, trainers and drivers) will show if in a certain race a driver has to select a horse as he may be listed on numerous entries. At most tracks if he is only listed on one that would be his mount. Unfortunately, it is not the same at every track and that has recently been a terrible annoyance to me. I had a filly in the sires stake at Yonkers and listed Mark MacDonald to drive. The sheet came out it was the only horse he was listed on. The next day the judges called and said I needed a driver because Macdonald picked another horse. I was livid. When I got to the track I approached Mark and called him Benedict Arnold. He said he never picked off my horse. How does this happen? Ask me how politics enters the judge selection in New York.

Rant over. The simple answer to your question is the drivers pick after post positions are drawn, but at most tracks they only choose when they are listed on multiple entries.

Bill Nelson asks: What pieces of equipment do you dislike and why?

Anyone who knows me knows my answer immediately. I hate trotting hopples. I think they hurt good trainers and eventually will kill breeders. There have been trainers that to me are or were great horseman that used them exclusively. I don’t condemn the trainer in the least, it was their way and they were successful. I speak of the late great Carl Allen, and my friend and excellent horseman Ray Schnittker.

Are they a good option to get a horse to the races and make the owner some money? Absolutely, but in my heart I think the downside is far greater than the upside.

Yearling selection is everything and if you know how to select a colt you will never need trotting hopples. I had a wonderful career and never had to use them on a colt I selected. I have used them on homebreds and horses that people sent me and never had a top horse that wore them. In closing, on top of the fact I don’t like them, I personally feel they slow a horse down, especially toward the end of a mile when they tire of the restraint. There are plenty of great horseman left that can still properly gait a young horse. Give them a chance you will get more bang for your buck.

Bill Pelligrino asks: Why did you react so harshly at Stanley Prakas’ post on Facebook about Chas Hanover?

Someone once said, “Don’t criticize a man until you walk a mile in his shoes.”

I have trained horses for well over 50 years and I will tell you from vast experience it is a very difficult job.

Prakas, took what I consider to be a cheap shot at my friend and Hall Of Fame trainer Chuck Sylvester, and both Murray Brown and I took offense to it. In effect, he was praising Gilbert Herrera for buying Chas Hanover from Chuck and making him into a top horse. I don’t know Gilbert. I am sure he is a nice man and I am not criticizing the good job he did. I am sure he is a capable trainer. But, what he did was far from earth shattering. He bought a colt that was an under performer at two and had trouble finishing his miles, gave him time off, put him on Lasix and beat up on some non winners in a series. Most important, you can’t use Lasix in many states (Pennsylvania included) on two-year-olds. Chuck Sylvester is my age, he has had an amazing career and at this point in his life there no need to have average raceway horses in his barn.

So please Mr Prakas, the next time you decide to demean a trainer think twice.

To all my readers, thanks so much for all the kind words I truly appreciate your comments. Please keep the questions coming in. I will write my Road to the Derby this Sunday with all the week’s updates and will have the final pre-Derby notes next Friday after final workouts and post positions have been announced. Have a wonderful week.