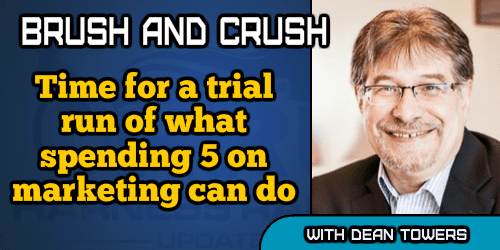 Prove or disprove the “five per cent for marketing” concept

It’s probably time for harness racing’s never-ending debate to come to an end.

Several years ago at my real job I was presented with an interesting problem. An old school, historic firm contacted us and said they’d love to try different types of new school marketing, but there was a stumbling block — the CEO was not sold on the concept. He’d done things (incredibly successfully) for some time in a certain way, and was reticent to try anything new.

To attack this issue, we proposed a pilot project. Instead of going all in with a large budget and long term plan, we’d spend a few hundred thousand dollars for three months. At the end of the period, and after enough relevant data was gathered, everything would be paused for three months and the results would be evaluated.

If the project worked, they’d be able to fund a long-term budget, and hopefully increase year sales for years to come. If it didn’t, at least they’d learn something, and probably save themselves money in the future.

This is nothing new. It happens all the time, and it’s pretty smart business.

When I open the pages of Harness Racing Update or other trades, it appears that almost monthly I see news of a USTA meeting debate about slot money for marketing; a poll that shows the rank and file wants it to happen; a letter to the editor asking for some sort of slush fund to market the sport; an opposition letter saying marketing doesn’t work, and even if it did, tracks should pay for it.

It seems to be a never-ending debate. It’s harness racing’s version of Bill Murray’s Groundhog Day.

I think we all agree that it’s a debate that needs to be addressed somehow.

To me it makes some sense that harness racing should design a pilot project, fund it, implement it, and if the concept is proven, it can continue. If it fails, it can be scrapped.

With many billions of dollars of slot money raised since the machines with rolling cherries were first introduced, 5 per cent, or many hundred million is a lot of money. When we look at single year revenue, it is a much less daunting a number and it should – simply by passing the hat around from fair-minded groups – not be an impossible task.

For instance, for each track’s big signature day, money may be spent to promote the event, and this money would have some sort of return – higher attendance, more handle, for example – which would be measured.

If money is earmarked for a large marketing push for seeded or carryover pools, these too would be measured. It’s pretty easy to figure out how effective this marketing plan was, because it comes back in handle comparisons.

Sponsorships are another area where the business seems to want to do more. It takes a value-added product to gain sponsorships, and building one costs money, but there will be a return of some sort, even if the project is modestly successful. Any money spent for outreach could be measured for efficacy without too much of a problem.

On the supply side, investment might be set aside for an owner outreach program. This program could offer cost effective partnerships on a handful of yearlings for either brand new owners, thoroughbred owners, or owners who have not bought a harness horse in more than five years.

This project would operate at a loss due to incentives, but there would be some return to the business (costs would be paid, yearlings purchased). The big test would be the following year, or years, where what percentage of these new owners come back, or continue to own horses, are the key performance indicator.

When the pilot project is complete, those bantering in Harness Racing Update, at the USTA, or in shedrows everywhere should be able to see if the investment worked, was a miserable failure, or was something in between. If it appears things worked well, then you hook up the race bike and do it all over again. If it’s obvious things didn’t; well, at least we can all stop arguing about it and move on.