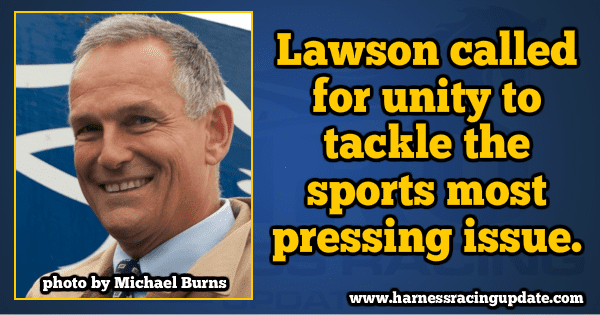 Woodbine CEO Jim Lawson talks speaks about the many challenges facing horse racing, but offers hope for a positive future.

The CEO of Canada’s top horse racing company gave HRU a blunt assessment of the state of the industry on Friday. But the Woodbine Entertainment Group’s (WEG) Jim Lawson said his company is well poised to lead the sport into the future.

“We’ve never worked harder at Woodbine in terms of guest experience, innovation and technology and marketing. I believe Woodbine is a leader in this and becoming world recognized as a leading technology racetrack, as well as marketing and innovation,” Lawson said, adding a recently-announced 19-year funding agreement with the province of Ontario that could provide nearly $2 billion in total funding — some $105 million per year — through 2038 (full story here) was a necessary first step in terms of stability for the entire province’s horse racing industry. He added that he expects the funding deal to survive June’s provincial election regardless of which party ends up governing.

“I think, generally, whether it’s this government or another government, they are all appreciative and respectful of the labor-intensive nature of this industry. You hear different numbers bandied about, but it’s somewhere between 20,000 and 30,000 people involved in this industry, directly or indirectly, or dependent on this industry in the province,” Lawson said. “If you have that kind of labor and the amount of economic impact that that has through food and beverage and taxes and gasoline – just everything – is substantial. I have to believe that whatever government it is would have to be supportive — whether it’s this government or another one.”

Lawson said low breeding numbers and declining horse supply are among a number of major challenges facing the industry.

“The low breed numbers have certainly leveled off, both breeds were challenged and what that results in is horse supply (problems)… we are challenged, maybe more so on the thoroughbred side than the standardbred side because of the Canadian dollar and the competition and immigration policies. We’re having trouble recruiting U.S. horses up here. It’s become more difficult than ever, so horse supply is certainly a big issue,” Lawson said, adding breeders and owners are crucial to solving the problem.

“Without breeders and owners, we don’t have an industry,” he said. “Our revenue comes through wagering and we’re similarly challenged on the wagering side with online gaming and all the alternatives there are today… These things have not been solved by the funding agreement. I think the funding agreement is a great first step, but we’ve got lots of work to do as an industry, relative to recruiting and new owners.”

Lawson said the long-term funding deal is also problematic because it does not account for inflation.

“One of our biggest challenges under the funding agreement… is there’s really no good growth. I’m a supporter of the funding agreement, but we need to find new revenue sources in order to not only have a promise or some light at the end of the tunnel for growth in purses, but also to attract new owners. It’s expensive to own, train and operate a racing stable and we need some growth. That’s across the board,” Lawson said.

Compounding the industry’s problems is the fact pari-mutuel wagering is down in Ontario.

“Let’s not lose sight of the fact that we need pari-mutuel wagering, it’s down in the province,” Lawson said. “As we’ve talked about before, the remote wagering has very slim margins on it and that’s where we saw most of our growth this year.”

Lawson then called for unity to tackle the sport’s most pressing issue.

“People just need to work together, that’s another challenge. It’s been very divisive in terms of all the interests and unless we come together, we’re not going to be able to overcome these challenges,” he said.

“On the positive side, I think there has continued to be a lot of great people in the industry. People are passionate about it. We’ve been around forever and we’ll continue to be around. I think what I’m finding at Woodbine Entertainment, we’ve definitely been able to recruit a higher level of talent. We’ve made this very much a professional organization and I’m very excited about our marketing initiatives, our innovative initiatives, our guest experience initiatives… we are in great shape as an organization in terms of the talent we have and the way that, from a cultural standpoint, Woodbine is off the charts in terms of a great place to work and people working passionately towards an end goal. This is a really exciting environment internally, but we have the external economic challenges that go with short field sizes and the pari-mutuel wagering model.”

WEG is well-positioned through its subsidiary Ontario Racing Management (ORM) to tackle the industry’s challenges. ORM has been entrusted by the government to direct horse racing for the entire province. Lawson is also at the epicenter of that process as the recently-elected interim chair of Ontario Racing (OR) which will work with ORM.

WEG TO RUN ALL ONTARIO RACING

“We’re going through a period where we’re bringing OR management under something called ORM – Ontario Racing Management, which is a wholly-owned Woodbine subsidiary. The OR management and administration will be done by ORM, in terms of budgeting and planning. I’ve been in the center of that with our legal team here,” Lawson said.

“There will be an OR board… and that board will enter into a management contract with ORM. Think of it this way, ORM will continue to perform all of the duties that the Standardbred Alliance is doing today, only it will be doing it for all (Ontario) tracks, rather than just the Alliance.”

The Standardbred Alliance is a consortium of seven Ontario racetracks — Mohawk at the premier level; Flamboro, Georgian Grand River and Western Fair at the middle signature level and Clinton and Hanover at the grassroots level. The Alliance was created in April of 2014 to work together to coordinate schedules, promote wagering and stakes opportunities for all and provide a more consistent customer experience across the group.

Meanwhile Ontario Racing is also undergoing a transformation to an 11-member board that Lawson expects will be in place sometime in May.

“It’s been quite detailed, as a result of the funding agreement negotiations, who will be on that board. It’s five racetrack position and five horsemen positions, plus one independent chair,” Lawson said. “Clearly, I don’t qualify to be an independent chair, so we will have to put an independent chair in place, once we get this new OR, with new structures and new bylaws, up and running in May.

“A board of 11 is large and it’s going to be hard to manage as it is. In an ideal world, you’d have a board of seven or eight. It is a difficult topic with some people, but I think the government is satisfied that there’s fair representation of all the different constituents and I think people have done their best to achieve that.”

Lawson said he’s worked for six years on helping reshape and rebuild the industry in the wake of the devastating cancellation of the Slots at Racetracks Program (SARP). He said throughout that time he has constantly worked to make a case to the government for the sustainability of Mohawk Racetrack.

THE CASE FOR MOHAWK

“The subject of my six years of negotiations was, ‘if you come to Mohawk, we’ll invest money in Mohawk. If you don’t come to Mohawk, we can’t afford to run two tracks,’” Lawson said, referring to a pitch to the Ontario Lottery and Gaming corporation (OLG) to issue a long-term gaming lease for the Mohawk slot parlor that will be expanded into a full-blown casino by the Great Canadian Gaming Corporation.

“Unless you have a gaming lease in place to support your operations, it’s very difficult based on the pari-mutuel model to even consider operating and running a racetrack. People should understand that. In order for us to even consider going year-round at Mohawk, the first step was essentially going to the government and saying ‘If you’ll invest enough, in all the labor that Mohawk represents, then we’ll invest in you,’” Lawson said, referencing a recent $10 million investment in the facility (full story here).

“What that does is it brings a year-round environment to Mohawk,” Lawson said. “They are going to be operating and expanding there and potentially putting in hotels and entertainment, all of the things that come with expanded gaming. That just creates a much more exciting environment. It brings people to the site and then it’s up to us to take advantage of bringing people to the site. That’s number one.

“It’s just a great place to watch harness racing, I think we all appreciate that, but if you can build that continuity by doing it 12 months a year, that’s going to help from a fan perspective as well.”

He said he hopes WEG’s investment in Mohawk — now officially called Woodbine Mohawk Park — will encourage people to invest in the industry.

“We’ve got new guest suites at Mohawk and a new dining room and new glass. There’s a $10 million investment and most of it is all about improving that guest experience and getting them to come out. And if you get them to come out maybe the next step is to bring it full circle to my first challenge – where they say, ‘Hey, I wouldn’t mind owning a part of a horse,’” Lawson said.