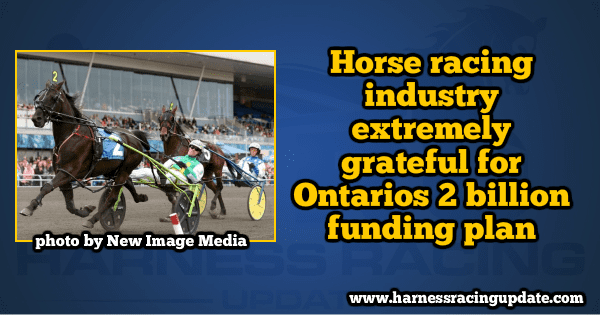 Nineteen year deal will provide up to $105 million annually to the province’s horse racing industry beginning in 2019 and stretching 19 years to 2038.

by Dave Briggs and Ontario Racing

The Ontario government has committed nearly $2 billion in funding for horse racing over 19 years. The deal, which was first proposed by the government in the fall of 2016, was officially announced Friday at Flamboro Downs by Ontario Finance Minister Charles Sousa. The province will provide “up to” $105 million annually in funding beginning April 1, 2019 and ending in 2038.

An Ontario Racing (OR) press release said, “the agreement is aimed at strengthening and sustaining horse racing and breeding in Ontario. It will provide nearly two decades of stable funding to increase the vitality of the industry in the province.”

The deal is the result of collaboration between the industry, Ontario Racing, the Ontario Lottery and Gaming corporation (OLG) and the Ontario government and “incorporates feedback from the industry provided through consultations, letters and meetings with government partners.”

“Today, our government is committing to a landmark agreement that will support the long-term sustainability of horse racing in Ontario,” Sousa said. “This funding will encourage economic development in rural communities across the province, while giving racetracks and breeders an opportunity to build a strong future for an industry that is central to our heritage.”

The announcement was among a spate of big funding announcements made in recent weeks by the ruling Liberal Party that is facing an election in June of this year and is riding low in the polls. There was no word at press time about how the two main opposition parties — the Progress Conservatives or New Democratic Party — view this government funding model for horse racing and what support, if any, they would provide to the industry if elected.

“Our government recognizes that the horse racing industry is vital to communities across Ontario,” said Jeff Leal, the Minister of Agriculture, Food and Rural Affairs. “That’s why our government remains committed to ensuring long-term sustainability of the horse racing industry and the rural communities that depend on it. This new, collaborative agreement will provide owners, breeders and racetrack operators with the support they need to ensure stability and success for the long term.”

In 2012, the Liberals announced an end to the lucrative Slots at Racetracks Program (SARP) that provided an injection of some $345 million annually to a horse racing industry in the form of a direct cut from revenue of the slot machines housed in racetracks. At the time of SARP’s cancellation, it was said to have supported 30,000 full-time equivalent jobs in the province. When the program ended, Ontario purses plummeted 35 per cent, race dates were slashed 39 per cent and the number of mares bred to Ontario stallions declined 56 per cent. There’s no definitive number on the job losses, but they were said to be significant.

The industry had rebounded, somewhat, in the years since.

In 2014, the Liberals announced a five-year, $500 million aid program for the industry that ends April 1 of 2019. The new long-term funding deal announced Friday is, essentially, a 19-year extension on that 2014 commitment by the province of some $100 million annually. If the deal reaches its conclusion in 2038, the province will have committed some $2.5 billion, total, to horse racing over 24 years.

“The government’s long-term funding commitment of over 19 years is unprecedented in the racing industry,” said OR chair Hugh Mitchell. “It provides much needed job security for the people who work in the industry, and it will contribute greatly to restoring racing confidence and its ability to sustain itself for years to come. On a personal note, I am extremely grateful for the work of this government and OLG management in their efforts to facilitate this funding model.”

Ontario Racing will oversee the allocation of the long-term funding. Details about how the money will be divided are not, yet, available.

Many in the industry are extremely grateful for the funding and the unprecedented term of the deal, which should provide stability for Ontario’s horse breeders, in particular. However, it should be noted the funding is less than 29 per cent of what the industry received annually under SARP and the deal currently does not account for inflation, meaning that $105 million in annual support will be stretched thinner in coming years.

Mitchell has told HRU multiple times since 2016 that the priority was securing a long-term funding model and then addressing how to drive more money toward the industry.

“My view is, I don’t know what the right number is, but let’s get into this, let’s get going and get our governance right and start to work with the government and see if we can drive up additional revenue through other products or other integration strategies… working with the OLG,” Mitchell said in 2016. “If you’re waiting for the perfect solution, you might put us out of business waiting for that. It’s not perfect, by any means, but at least it’s, to me, two meals a day is better than no meals a day so let’s get going.

More recently on the topic, Mitchell said, “We haven’t got that far because the priority was the long-term funding. Once that long-term funding model is set, then the priority will be: ‘How do we sustain this industry on this amount of money over the next number of years’ and for sure, in my view — and this won’t be the first time you and I have talked about this — there needs to be consolidated racing and rationalization of the industry. There’s been a considerable amount of it when you look at the number of race dates today versus 10 years ago, but we have to keep our mind open to rationalizing the industry to make sure that the supply of racing product matches the demand. In my mind, that will constantly evolve. In the private sector, it does. Demand changes and it’s the customer demand that drives your business decisions and that’s one of the challenges of our industry over the last three decades is we’ve been very production driven. We’ve been forced into new models and be demand-driven. As difficult and as painful as that adjustment has been, it’s the right thing for the industry.”