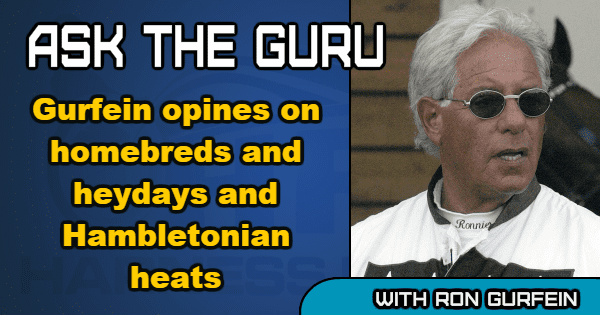 Is the Hambletonian better with heats?

Plus, advice to small breeders, top homebreds and the Big M in its heyday in this week’s edition of harness racing’s most popular advice column.

If you told me last year when I started writing for HRU that I would still be writing after 30 columns and not be fired I would say you were crazy. The support I have gotten from you the readers and the HRU team has been wonderful. Let’s hope I can keep the job for another 30.

I was pleased with my pre prep analysis on the Road to the Derby (full story here).

However, I was a bit distraught on how critical the NBC professionals were on the performance of Justify. Even though it was a pedestrian pace he still had to beat a good colt in Bolt D’Oro and was not asked that much by Mike Smith in the stretch. Please remember it was his third lifetime start and he has a right to be a little green. In the 4th Kentucky Derby pool that closed after the Santa Anita Derby, Justify was the 3-1 choice over Mendelssohn at 5-1.

Onto the business at hand.

David McDuffee asks: What can I do as a small breeder to make me more competitive with the large farms at the highest level?

David asked me this question two months ago and it is hard to answer as I could not find much information on breeders vs. sale results. You can see all the data you want on consigners, buyers and sales prices but somehow breeders fall through the cracks. I will however answer the question purely from my own experience.

Kevin Costner said in Field of Dreams “If you build it they will come.” Apply that to horse sales. If you give them the product, they will buy. The colt buyer seems to shy from any seller that races horses, small or large. I trained for Brittany Farms for two decades and always found their horses to be sale bargains because George Segal raced a large barn of horses. Even today after selling many ridiculously cheap colts they remain with the same stigma. The same problem faces the David McDuffees of the industry. We all know you race horses, so if you are selling why would I want what you don’t? You know more about your horse that I do. I remember seeing the first few foals of Pizza Dolce, maybe the fastest and most erratic filly of her era. But I never had any intention of bidding because 99 per cent of the time they were coming home to you.

To change all this, you must put out a great product (I know you do), sell some great horses and don’t put a colt in the sale you intend to train. Buybacks are a killer to your business.

If you raise a high-profile youngster, make sure they are prepped by the right farm and consigned by a sales agency that will show him off. Most of all, advertise. Pictures and videos well in advance of the sale have great value. I personally know of a small breeder that has sold many $300,000-plus horses by doing just that.

If I had more facts and figures on hand I would be able to name some names but sorrowfully the information was not available. Please note that HRU has displayed fabulous video ability with the recent Heather Vitale series on 2-year-olds in training. I suggest using that format in the form of an ad would have great results.

Whatever path you take, you know I wish you the best of luck and good fortune.

Bill Bigler asks: Do you like the heat format for the Hambletonian or do you prefer the separation of races with a week between eliminations and final?

To me this is easy. Tradition should be the answer but I find a lot of other ingredients pertinent to the answer. Television alone is the culprit for eliminating heats. I was fortunate to win that day with Continentalvictory, however the fractious filly of Stanley Dancer, Act Of Grace, caused so many recalls that the television time went severely over.

To me the most important factor relates to the experience of the owners. The entry fee is the largest in the sport as is the purse. It is, without doubt, the most enjoyable experience in harness racing. So why if there are 30 horses entered should only 10 owners be invited to the big dance? When the race is decided on a heat basis, all 30 owners get to attend the carnival of fun and receive a little notoriety for having their horse in the biggest race for trotters on the planet. Another consideration is the gambling aspect. There are more people at the Meadowlands on Hambletonian Day than any other, and they bet more. So why not have two or three elimination races to replace what would be run of the mill overnights on this day?

Lastly, our horses were bred to go heats and the tradition of this great race should remain in tact.

I personally would like to thank the members of the Hambletonian Society for bringing back the original format.

Regina Adams asks: What was it like training at the Meadowlands in its heyday.

Without out a doubt it was something I wish all horseman could have experienced.

I think Ray Remmen and I were the first to come and the last to leave. In 1976, Remmen had come from Canada with a top stable and I came from Liberty Bell and was 0 for 51.

I would race each race hoping to get a check, never a thought about winning. It was very hard. But as the years went by, whether you had a large stable or small, a camaraderie developed between those that survived that was stronger than any place I had been. The Remmens always had coffee brewing in the morning, Jimmy Doherty always had a welcome smile and donuts to offer, Doc Balmer would appear at 8:30 each morning with some sort of fresh fruit. Robbie Siegleman would come by to visit on his golf cart. Someone from the track crew would drop off the evening’s programs. If you were a little hungry at ten o’clock you were welcome at the race office for bagels and cream cheese or butter if that was your preference. Joe De Frank and his son Doug always welcomed visitors, as did dandy Don D’Andrea and Warren DeSantis.

I could go on and on, that’s how great it was, but I would be remiss to add the great paddock crew headed by Teddy Kroll and take note there were actually delicious hot meals served every night in the drivers’ room. My memory is not so sharp anymore and there are so many people I didn’t mention. Please forgive me the transgression.

The area itself had fun spots. Lunch or dinner at Perrettis or Il Villaggio, or Jerry’s and meeting friends at The Bottom of The Barrel after the races and hearing Herman Carbone sing Ave Maria. It was a magical time.

To be perfectly honest, I am not nearly as successful with homebreds as I am with my own selections. This is true mainly because the type of horse that appeals to my tastes is not that readily available. Therefore, when I train a homebred they are horses that the owners retain because they look okay, but they are in love with their pedigree. This works once in a while, but not as often as one would think. When I trained for Brittany Farm, Mr Segal would have me come to Lexington in early June to peruse the homebreds. Unfortunately, what a colt looks like June 1 is rarely anything like he looks November 1 when I break him.

Two of my favorite homebreds I trained in the same year and were not great, but two wonderful fillies. Of interest they both broke the track record at Harrahs Philadelphia on the same day. Secret Magic won in 1:54.4 and a few races later Crown Laurel won in 1:54.3. It was a lovely afternoon. Anyone who remembers how horrid the track was at that time will know that those were fabulous times. Crown Laurel won less than $100,000, but she had serious back issues. As a broodmare she has had fine success with three winners from three foals, including the nice 2-year-old of Erv Miller, Supergirl Riley 2, 156 $100,000.

Thanks again to all my readers for your support and keep in mind the duo of Yannick Gingras and Doug McNair return today to the Alagna Army at Sunshine Meadows in Florida and will put the pedal to the metal on some precocious babies. You will have the full report on Sunday as well as the update on The Road To The Kentucky Derby.

Clay Horner asks a three part question that I will answer next column. Have a wonderful week.
Have a question for The Guru? Email him at GurfTrot@aol.com.