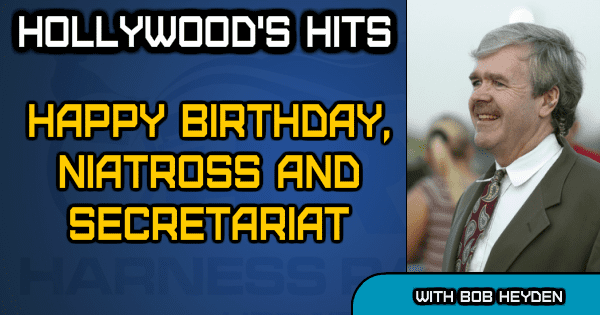 On March 30 seven years apart, two of the greatest racehorses in history were foaled. Thoroughbred Secretariat was born in 1970, followed by standardbred Niatross in 1977.

It is worth nothing the amazing similarities between these two giants of the horse racing world.

Both raced only at 2 and 3 and both were named Horse of the Year each time.

Neither harness racing nor thoroughbred racing in the nearly 50 years since has had anyone duplicate this — be named HOY at both 2 and 3.

Both won their biggest purse events in the state of New Jersey — Secretariat the Garden State Futurity to close out his freshman season and nail down HOY honors in 1972, and Niatross in the Wilson of 1979 and the Meadowlands Pace of 1980. He twice won the sport’s biggest prize — for $862,000 the first time and then for $1,011,000 in 1980 as a sophomore in harness racing’s first million-dollar event.

Both had a sire who uncharacteristically got beat in their biggest test — Bold Ruler was fourth in the 1957 Kentucky Derby at 1.20-1; Albatross was second to Nansemond in the 1971 Little Brown Jug costing him the Triple Crown.

Both set records in the Triple Crown — Secretariat’s records all still hold today. His 1:53 Preakness, his 1:59 Kentucky Derby and his 2:24 Belmont at a mile-and-a-half; Niatross was the first ever sub-1:55 Little Brown Jug winner in 1980 (1:54.4) as he set six world records that day alone. All three of Secretariat’s Triple Crown records still hold up 45 years later.

Neither horse raced past 3.

Both lost at Saratoga.

Both Secretariat and Niatross’ sire Albatross stood stud next to the biggest star in the stable alongside them. Riva Ridge and Secretariat would stand at Claiborne Farms together and Albatross and Trotting Triple Crown winner Super Bowl stood at Hanover Shoe Farms for a quarter century together, after being stablemates in 1971-1972-and going 1-2 in the HOY ballot that second year.

When Niatross’ time trial time of 1:49.1 occurred in 1980, it broke the existing mark by nearly three full seconds.

When Secretariat hit the wire in the Belmont in 2:24 by 31 lengths, it broke the existing record by nearly three full seconds.

Somebeachsomewhere was foaled in 2005.

Native Dancer was 21-for-22 lifetime.

Somebeachsomewhere was 20-for-21 lifetime.

Native Dancer’s lone loss came in his biggest test — the 1953 Kentucky Derby — by a head, as the favorite.

Somebeachsomewhere’s lone loss came in the 2008 Meadowlands Pace — by a neck, as the favorite.

Both continued on as sires of great influence.

A look at the Florida Thoroughbred (a monthly) from January, 1973 and it reveals in the News N Notes section a blurb about “Steinbrenner Yankees Owner”. Here’s the full text:

“George M. Steinbrenner III, who races as Kinship Stable and who owns Kinsman Stud Farm near Ocala, FL, was included in the 12-man syndicate which on Jan. 3 purchased the New York Yankees baseball team from Columbia Broadcasting System for $10 Million. “It’s the best buy in sports today” said Steinbrenner, a former owner of the Cleveland Pipers in the American Basketball League, who currently is a partner of the Chicago Bulls professional basketball team.

Five days later, Steinbrenner disclosed that he had sold his interests in the Northfield Park Harness Track to Cleveland real estate developers Carl Milstein and Bob Skakick, with whom he had purchased the track last summer.

President of the American Shipbuilding Co. in Cleveland, Steinbrenner is also a play producer, having been associated with the Broadway shows Applause, Funny Girl, George M., and On A Clear Day You Can See Forever. Recently named to the Ohio Board Of Regents, which determines the policies of the states universities, Steinbrenner has raced stakes winners Joans Paris, Jessies Girl, and Kinsman Hope since entering racing in 1969. He also bred Observer Gold Cup winner and English Champion 2 Year Old colt Noble Decree.”

In 1980, in the first $2 million race, Land Grant posted the upset with Armbro Wolf second. They both appeared the following year entered in the Cane Pace. A closer look a their records entering the Triple Crown event show the monumental difference a 1-2-3 finish in the Wilson made in those days. Land Grant came into the Cane with a career slate of 30 8-3-4 $1,094,120, with $1,005,500 of that was made in the Wilson.

If you eliminate their Wilson money, Land Grant averaged $3,056 per start in his career and Armbro Wolf averaged $3,857.

Team Allen — in this case Carl and son Marty — were in action in 1983 on Mondays two weeks apart for two of their biggest races ever. One turned out not so good, the other a dream come true.

On Monday, July 25, 1983, their Its Fritz, in his first matchup with Cam Fella, finished third in the “Clash Of The Titans” at the Meadowlands, the first of three matchups between the three-time world record setter and the two time Horse of the Year. Marty drove.

Sometimes we forget the great ones; the ones who put down the foundation for the rest of us. Sanders Russell is one. Born on April 26, 1900, he had a hand in the sport’s first two millionaires — on the pace and on the trot. Not something you would think someone born in 1900 would have, right?

In 1949, Russell bought Hal Tryax for $1,500. As a sire, he gave us Cardigan Bay, who in September of 1968 at Freehold tipped past the million-dollar plateau as the sport’s first ever seven-figure earner.

In 1964, Russell dug in for $900 for Fresh Yankee as a yearling and she wound up her career at $1.294 million, the first million-dollar-winning North American-bred trotter — and the 1970 HOY.

One more than dad

Winning a trotting Triple Crown race and then coming down happened in the 2017 Hambletonian, but it also happened in 1981 in the Yonkers Trot, when Keystone Triton (Eldon Harner) held off Mo Bandy but broke on the wire and was lapped on-and placed second. Carl Allen and Mo Bandy got the winner’s share of the $279,701 purse. Favored Smokin Yankee (even money) was third, and a horse by the name of Balanced Image was sixth for Buddy Gilmour. Balanced Image’s siring career landed him #2 behind only Speedy Crown all time!

Standardbreds in the 1979 Rose Bowl Parade

The 1979 Tournament Of Roses had some standardbreds in it. Sponsored by Harness Tracks of America (HTA), the 5.5 mile trek through Pasadena included Doug Ackerman, Shelly Goudreau, Phil Lehman and Paul Kaufmann in an exhibit that read, “Harness Racing — Then And Now”. Two 19th century high wheel sulkies were on display and two modern ones. The gallant horses were Andys Bart, Edgewood Athlone, Huck Finn and Twice Rejected.