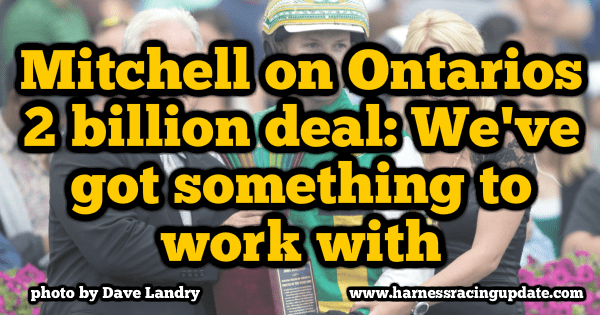 Mitchell on Ontario’s $2 billion deal: “We’ve got something to work with”

The outgoing chair of Ontario Racing analyzes the 19-year, $105 million per annum provincial funding deal for horse racing and opines about whether it will survive the upcoming election.

In the hours before Hugh Mitchell stepped down as chairman of Ontario Racing (OR) Thursday, he spoke passionately about the government of Ontario’s 19-year funding deal for horse racing announced last Friday, March 23 (full story here) that could amount to an almost $2 billion investment in the industry if the deal reaches its intended conclusion in 2038.

“When you look at other jurisdictions, this deal is pretty unique across North America. It is very unique,” Mitchell said. “I wouldn’t say it’s the best, because there are other models out there, but on balance it’s a very strong program and, in particular, because it’s going out to 2038. A lot of the programs are five years, some 10. This one is out there for the better part of 20 years, so I think we’re lucky. We’ve got something to work with.”

Securing the long-term funding deal first broached in the fall of 2016 was the major accomplishment Mitchell was hoping to help guide to fruition before stepping down as chair of OR, an industry association that strives to represent all three racing breeds in Ontario and their respective groups and likely will play a significant role in how up to $105 million a year is allocated in a province with 15 racetracks.

The OR board unanimously selected Woodbine Entertainment Group (WEG) CEO Jim Lawson Thursday to replace Mitchell as chair. Mitchell currently remains on the board.

While Mitchell acknowledged the long-term deal is less than a third of what the industry once received annually from the Slots at Racetracks Program (SARP), he said a deal that promises up to $105 million in annual funding is significant.

“The amount of absolute dollars committed to the program on an annual basis is pretty material and it’s just around $105 million. There are other pieces, though, that are really helpful in securing a more sustainable future for our industry. One of them is the governance structure that will come about with the new OR, where the board is expanded to include all breeds, all sectors and I think that’s really important. So, it hopefully is a unified single industry association that represents all parties and stakeholders,” Mitchell said.

“It may not be ideal and it certainly isn’t what it was (under SARP), but, boy, just pick up any newspaper and the world is changing. There are a lot of businesses having to re-invent themselves. A lot of industries are having to reinvent themselves and find a different way. This disruption is not unique to horse racing at all. Those of us that have been exposed to other industries, it’s easier for us to grasp that, if I can say that, because we’ve seen it before. This movie has run before. I guess for the industry, it’s kind of like the first time we’ve been through such a significant disruption with the cancellation of racetrack slots, but it’s up to us. There’s no sense looking back because history is behind us and now it’s about what we can do with it.”

As for whether the deal will survive Ontario’s provincial election (slated for June) should the ruling Liberals lose power, Mitchell said he expects the other two major political parties — the Progressive Conservatives and New Democratic Party — to honor the deal in principle.

“My sense is that regardless of which government survives the election, that the principles and the terms and conditions of this long-term funding… I would say are generally agreed to by the three parties,” Mitchell said. “I don’t anticipate any significant alterations or amendments. I think they are on sound financial footing and rationale. I think the public policy that is around the $105 million is pretty defensible, so I don’t worry about a changing government at all. I think the one constant will be the role of OLG (Ontario Lottery and Gaming Corporation) as the arm of government that provides the oversight, so that will be consistent. I’m pretty confident that it’ll be seamless regardless of what the election might bring.”

Mitchell said the deal provides necessary stability and now the industry must work to grow its revenue. One idea is to work with its partner, the OLG, to try to grow distribution networks for pari-mutuel wagering through lottery retailers and develop gambling products tied to horse racing.

“On things I would look to try and improve upon, one is that once we get settled as an industry and get the new OR working properly, I think we’ll have to sit down with the OLG and talk about alternative products and alterative channels to grow the business. This (funding) model does not really speak to growth and that will be up to the industry, but I think that’s a piece… it’s not something that we can particularly deal with in the next 12 months, but certainly in the next three to four years we need to be thinking about alternative products and distribution channels working with their partners,” Mitchell said.

He said Ontario Racing has to work to attract capital through horse ownership and focus on improved transparency with respect to how it allocates the government funding.

“For some of us that have been around for some time, there was a day when pari-mutuel wagering and purse account statements were available monthly for horsepeople, breeders, owners and everybody to have a look at and see how the revenue was generated and then how it was spent. I think we’ve got to get back to a model where we are constantly updating and informing our partners, the horsepeople and breeders, about the status of the funding. Shame on us if we don’t get to that point. I think we will. There’s a general agreement that it has to happen, so we need to start that process,” Mitchell said.